The Rise Of FAANG Stocks Explained And The Reasons 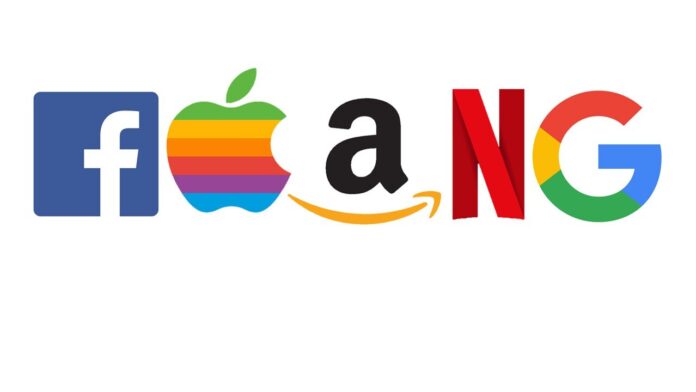 FAANG is the acronym provided to the five prominent tech stocks of the world, as per their market performance and capitalization. The tech giants are Facebook, Apple, Amazon, Netflix, and Alphabet (the parent company of Google).

FAANG stocks signify the combined stock value of these five companies that are listed publicly on the NASDAQ stock exchange in New York.

The FAANG stocks have accounted for an extensive portion of the market gains and economic growth over the last decade.

When the market crashed in March, concerns were raised that the rising stocks would overturn because of a plummet in consumer spending and marketing budgets.

However, for FAANG, the stay-at-home economy accelerated their trajectories. With the ongoing pandemic, more aspects of the lives of people shifted online, and the FAANG companies became the greatest beneficiaries.

FAANG stocks have met the lofty expectations of the investors consistently by delivering high-grade sales and escalations in profit while maintaining enticing margins.

Most of the FAANG stocks reported powerful second-quarter results, propelling them to further gains. Google, however, posted a slight decline in revenue.

Facebook announced a 12% year-over-year rise in Daily Active Users, which has signaled its enduring domination of the social media market. Facebook has published year-to-date price returns of 22%. For the quarter that ended in June 2020, Facebook revealed a growth in total revenue of 11% year-over-year. The net income of the giant also skyrocketed by 98%.

Apple is up by 49% year-to-date and over 100% since the crash of the market. It has also recently revealed the results for its quarter that ended June 2020.

Net revenue for the quarter has risen 11%, with an 18% increase in EPS year-over-year.

Amazon is the leader amongst the FAANG stocks, with a 70% gain in 2020. The extreme surge has been because of the lockdowns, which increased the demand for e-commerce and cloud computing.

Amazon managed to deliver a profit of $5.2 billion for the second quarter of 2020, which is approximately double the figure a year ago.

Netflix has added 10.1 million new subscribers in the second quarter because of the ongoing pandemic. It has added more than $100 million worth of series and movies in the pre-production and development stages.

For the quarter that ended June 2020, revenues reported were $61 million, up 24.5% from the same time last year. Netflix is said to witness a year-over-year revenue rise of 21.3% in the next quarter.

Google has a year-to-date price return of about 10%, making it the slacker of the FAANG group.

With a significant rate of ad cut from small businesses and the travel industry because of the Coronavirus, Google has lost revenue from its two big suppliers.

Nevertheless, the company has still managed to deliver an earnings rise of 21.5%.

If you wish to enter the domain of stock trading, visit Alpaca, which is a technology company that modularizes the world’s asset management activities.

Reasons And Analysis For The Escalations In FAANG Stocks

Stay-at-home orders have shifted the crowds away from malls and shopping centers. Online shopping is now in vogue because of the convenience and added safety of being shielded from the pandemic.

With millions of employees working from home, businesses are dependent on the cloud-computing platforms powered by Amazon.

Apple has been hit mildly by the pandemic, which crippled its supply chains in Asia. However, their revenue still rose by 1% during the first quarter.

Alphabet and Facebook have witnessed a sharp drop in advertising. However, Alphabet’s ad sales still rose during the first quarter, just not as rapidly as in the past.

The FAANG stocks have all bounced back because, during these uncertain times, investors are seeking growth and stable track records.

Investors have experienced confidence and visibility in the tech sector and are thus, willing to divert their money to the tech industry.

Earnings figures for the tech sector have plummeted only 3% over the past few months. The communication services sector, home to Facebook and Alphabet, is down 14%; however, both are much stronger than the 21% decline in earnings estimates for the overall S&P 500 (Source).

Big Tech companies have the financial flexibility to get through a crisis. These companies have made heaps of cash and can tap the capital markets to get plenty more, easily.

The resurgence of Big Tech has aided in the recovery of the overall stock market due to the dominant role these companies play in the S&P 500.

FAANG constitute about 21% of the entire S&P 500’s market value, according to Goldman Sachs, which is the highest market concentration in recent memory.

The weight of these five companies is roughly equitable to the combination of three of the stock market’s poorest sectors: financial (10%), industrial (8%), and energy (3%) (Source).

The five tech giants have a humongous user base spread throughout the world, where people have been dependent on their platforms for various needs, especially during the lockdown –

Apple: This tech giant is the most dominant smartphone retailer in the U.S., and one of the most respected brands in the world because of its quality and privacy policies.

Amazon: This company controls about 44% of all e-commerce sales in the U.S., as per the analyst estimates at Bank of America/Merrill Lynch, and is a leader in cloud computing.

Netflix: According to eMarketer, about 77% of all U.S. streaming subscribers view content from Netflix, crowning it the domestic king of streaming content.

Alphabet: This giant has been responsible for between 92% and 93% of the global search market share across the trailing year.

When traversing through the markets, algo trading is paramount to counter
the volatility and mitigate losses associated with the variation in the stock prices.

With the ongoing pandemic, the FAANG stocks have witnessed significant increases, unlike the rest of the S&P 500.

Each company has boosted its profits by offering people quality products and services that comply with their needs to counter the virus and kill lockdown boredom.

Investors have always been keen on putting their money in FAANG stocks because of their reliability record and their ability to generate more cash with minimal hassle.

Share
Facebook
Twitter
Pinterest
Linkedin
- Advertisment -
Facebook Flipboard Instagram Linkedin Twitter
© 2021 Retail Insider Media Ltd. All Rights Reserved. The content on this website is protected by the copyrights of Retail Insider Media Ltd. or the copyrights of third parties and used by agreement. No part of any of the content of this website may be reproduced, distributed, modified, framed, cached, adapted or linked to, or made available in any form by any photographic, electronic, digital, mechanical, photostat, microfilm, xerography or other means, or incorporated into or used in any information storage and retrieval system, electronic or mechanical, without the prior written permission of Retail Insider Media Ltd. or the applicable third party copyright owner.