A Look inside the Japanese Gambling Industry 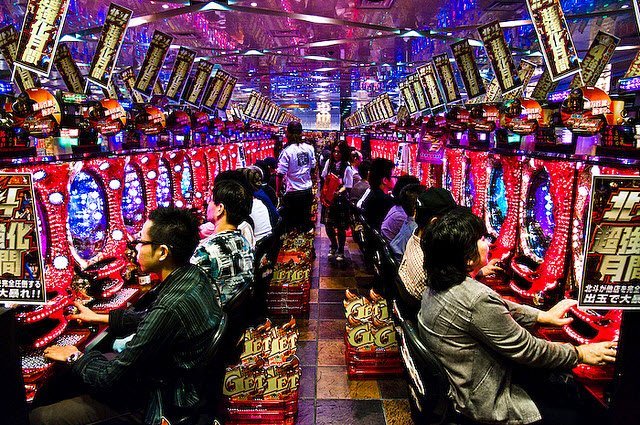 Japan has long been associated with honour and discipline, so it comes as no great surprise that their gambling scene has been turbulent. The regulations surrounding the Japanese gaming industry have been historically strict, but in recent years they have seen massive change. With the introduction of The Integrated Resort Promotion Act (2016), casinos may finally be unleashed upon the populace, a market already saturated with the ubiquitous presence of Pachinko.

Pachinko is the closest thing Japan has had to gambling up until these latest developments. Coming from humble origins as a children’s toy in Chicago, this pin-ball style game amassed a market size of over 180 billion dollars in 2017, and is as close to gambling as can be without technically being considered so.
At the end of a game of Pachinko, similarly to any other arcade game, the player receives a coupon based on the size of their winnings. Some parlors which seek to offset the image of Pachinko as a gamblers’ sport offer only prizes, but the majority offer a separate building in which these tickets can be exchanged for money; because there is no back-and-forth transaction within the same building, the game can escape the technical classification of gambling and remain legal.
However, by the Basic Act on Countermeasures for Gambling Addiction (2018), the term gambling has been expanded to include Pachinko, horse-racing and numerous other lucrative markets in Japan. This act was introduced as a cautionary measure; its main focus is on preventing gambling addiction with the new casino-age lurking on the horizon. It also strives to provide support systems for people who suffer from gambling addiction, which – even though gambling was technically illegal in Japan until now – is a very real problem due to the massive gaming industry of Pachinko, something that has only recently been acknowledged.

Online Casino – The Loophole Japanese Have Been Taking Advantage Of

Whilst Pachinko retains its title of most lucrative gaming business in Japanese culture, another industry has just begun to rise. The mobile-gaming world is currently booming in Japan, having reached a value of more than a trillion Japanese yen in 2016, marking a doubling of its market-size since 2013. It is clear to anyone watching that the market provides a vast source of attainable customers; the only complication is in the approach of these foreign companies to the sensitivities of the Japanese people.
Statistics show that there is an overwhelmingly strong preference in Japan for games produced by Japanese industries. This is perhaps because the people are so loyal to their culture, keeping in line with traditions of honour which reach back to their very beginnings; so far, any deviations from that culture have shown unsuccessful in breaking into the market. If they are to extend a hand in beyond the fingertips, foreign gaming companies will have to show a stronger connection to what the Japanese people are comfortable with.

It is a well-known fact of today’s world that with a phone or a laptop one can escape their country quite easily. You may travel across the world in the click of a button, and apparently so too may the regulations by which you must abide. Online casino gambling is illegal in Japan, but when the casino server is hosted offshore, it isn’t technically in Japan. Many people are now skirting around the law in much the same as they have been with Pachinko for years, using foreign online casino operators to legally gamble. There is a wide range of operators to choose from as you can see in this post by Japan 101 which breaks down the most recommended online casinos to use in Japan.

This window presents an incredible opportunity for companies intelligent enough to pounce on it. The mobile-gaming industry has advantages over others, in that people can participate without having to leave their homes. This is especially relevant in today’s situation, as pachinko has seen a decline in the pandemic, and people who would otherwise be in the Pachinko Parlors are sitting at home with nothing to do. The mobile-gaming industry has not seen such a decline, and the majority of its potential still remains untapped.

The State of Play Now

Currently, integrated resorts are a well-established plan for the future, and loom ever closer.  It has been stated that they will be introduced no earlier than the year 2025. The country is already well-prepared to accommodate the resorts with the Integrated Resort Promotion Act and the Basic Act on Countermeasures for Gambling Addiction; one might say that they’ve covered all their bases. A resort commission has also been set up, to oversee the various regulations and issues which come with the introduction of casinos. These issues include economical concerns, the attention to gambling as a mental health issue and keeping a keen eye on Yakuza interference.

Mobile gaming still has a long way to go to catch up with Pachinko, but with the current global situation one could easily make the case that it will see another major rise. As soon as restrictions were lifted in Japan, lines could be seen gathered outside favoured Pachinko Parlors. This goes to show that the urge to gamble is far from lost in the Japanese people, and a new wave of opportunity is coming fast to both consumer and casino.