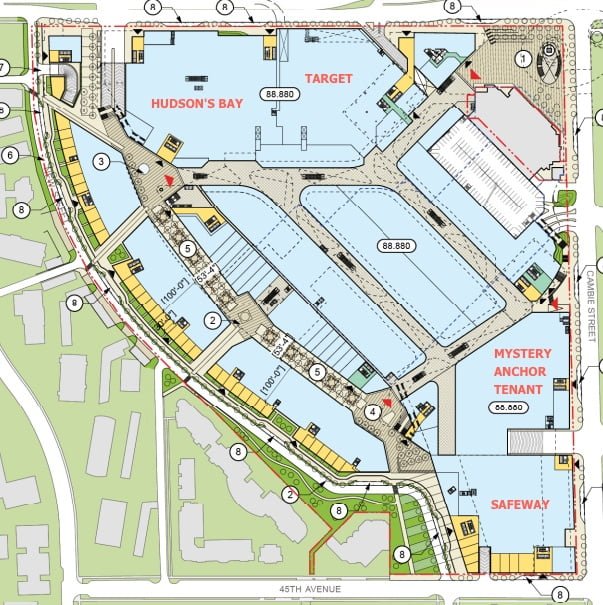 Today we received plans for the overhaul of the retail component of Vancouver’s Oakridge Shopping Centre. Mall space will double in size, and a new anchor tenant will be included. We’ll give you a quick rundown of the project’s new retail:

1) A new Hudson’s Bay department store will be constructed at the North End of the mall. We have been told by Hudson’s Bay management that it will include a stunning interior and will include a substantial roster of designer merchandise that will rival the recently renovated Yorkdale Shopping Centre store in Toronto. The current store will be demolished for expanded mall space

3) A completely new anchor store will be constructed at the Southern portion of the site. We will discuss this further, below.


4) A relocated, new-build Safeway grocery store at the south-end of Oakridge.

5) New indoor and outdoor-oriented retail will be created, while the rest of the existing retail space will be substantially renovated.

Speculation is running rampant regarding who the new anchor tenant will be. After being provided the floorplans this morning (see below), we attempted to identify who the new anchor might be. We received two very interesting suggestions, and two less-likely suggestions. Our insider suggests that they think the new anchor tenant could either be la Maison Simons, or possibly (we’re only speculating at the moment),  Bloomingdale’s. Hudson’s Bay has been in talks to bring the Bloomingdale’s label to Canada and we’ve been told negotiations have stalled. An Oakridge Bloomingdale’s might be what brings them to Canada.

It has also been speculated that the space might go to either Nordstrom or Holt Renfrew. Our Holt Renfrew insider was unable to confirm an Oakridge location and phone calls to Nordstrom Management were not returned at press time. We note that Holt Renfrew already has its 137,000 square foot store at the North end of Pacific Centre while Nordstrom will open its 230,000 square foot store at Pacific Centre’s southern end. One retail expert we consulted tells us he thinks Oakridge is too close to Downtown to duplicate Holt Renfrew or Nordstrom stores, especially given the rather large size of the proposed Oakridge anchor store.


We will be watching this retail development very carefully and will provide you with updates on this project as information becomes available.

Canadian Retail News From Around The Web For April 14, 2021