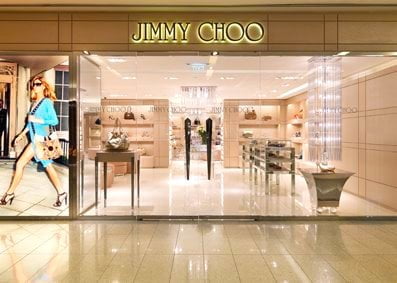 Yorkdale’s 2,250 square foot Jimmy Choo is next to Tiffany & Co., in part of the retail space formerly occupied by Mexx. It is located in Yorkdale’s impressive new ‘luxury wing’, which houses retailers including Cartier, Mulberry, Burberry, Ferragamo, Versace and, soon, Bulgari, Moncler, Montblanc and Kate Spade.

To celebrate Jimmy Choo’s First Toronto store, a special edition handbag was created, featuring a Toronto subway map. It retails for $1,095 and of the 20 created, most have already sold.

In December of 2013, a Jimmy Choo shop-in-store opened within Yorkdale’s Holt Renfrew. As can be seen from the floorplan in this article, the new free-standing Jimmy Choo is mere steps away from Holt’s.

London-based Jimmy Choo is one of the world’s most well-known footwear and accessories brands. In Canada, it’s carried at selected Holt Renfrew stores. Nordstrom and Saks Fifth Avenue stores will also likely carry Jimmy Choo when they open their Canadian locations. There are 26 Jimmy Choo stores in the United States, including three concessions within Bloomingdale’s stores.

A source familiar with the company informs us that Jimmy Choo will likely open at least two more Canadian stores. A Downtown Vancouver store is foreseeable as well as another Toronto location, either in the Yorkville area or at the Toronto Eaton Centre.