Versace Home Opens 1st Flagship in the World in Vancouver 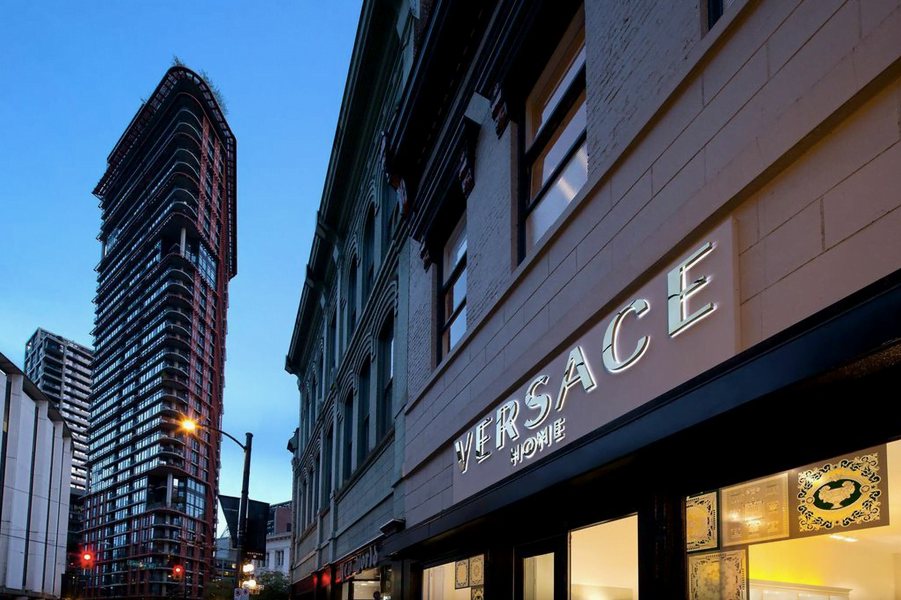 Located at 310 West Cordova Street, Versace Home carries furniture as well as tiles, lighting, bathroom fixtures, bath accessories, porcelain, glassware, textiles, carpets, bedsheets, fabric, decorative pieces and wallpaper. The store occupies about 2,000 square feet of retail space in a building measuring about 3,000 square feet. According to SpaceList, 310 West Cordova features 16 to 18 foot ceilings, as well as exposed brick on both side walls. It has access to a courtyard at the rear, and there are four large parking garages within two blocks.

Versace Home was founded in 1992, initially as a collection of textiles for the home (sheets, duvets, pillows and cushions). Soon after, it launched its first range of porcelain dinner sets – the result of the strong collaboration with Rosenthal GMBH. The Versace Home brand has since expanded to include the product categories mentioned above.

Versace plans to open as many as five Canadian fashion stores within the next several years, according to a source familiar with the company. Versace expects its new Canadian locations to break even within a year of opening, and expects them to be profitable within two years. Currently, Canada’s only free-standing Versace store is located at Toronto’s Yorkdale Shopping Centre. The 2,800 square foot location opened this summer. Versace’s current Vancouver location, which opened in 1987, is a licensed shop-in-store within multi-brand luxury retailer, Leone. Vancouver’s Versace carried the home collection up until a couple of years ago.

Vancouver has a history of Versace store locations, besides its current boutique inside of Leone. In 1993, the company opened North America’s first Versus by Versace store, occupying about 2,500 square feet at the southwest corner of Burrard and West Georgia Streets. In 1995, a franchised Istante by Versace store opened at 769 Hornby Street, across from the Vancouver Art Gallery. Both closed several years after opening.

All photos were provided by Versace Home/Major Global Interior Inc.