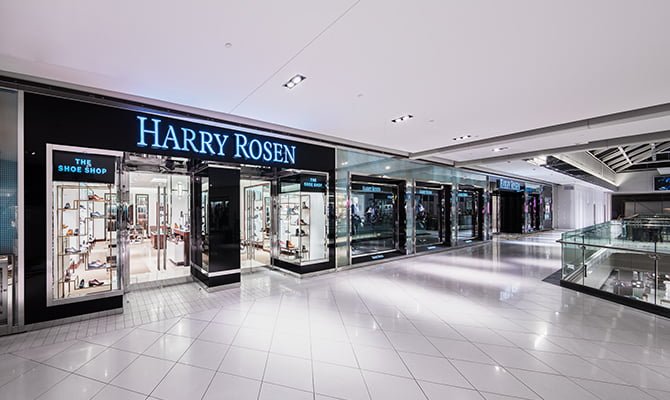 Upscale menswear retailer Harry Rosen‘s new Rideau Centre flagship is now open, complete with a first for the company — a stand-alone footwear shop with its own entrance. The new store features a unique exterior and modern, bright interiors, showcasing an expanded assortment of luxury designers. The 17,000 square foot store replaces an adjacent location which was about half its size.

Its storefront features a houndstooth pattern, created by artisans who layered the glass to create a 3-dimensional appearance. It’s lit with more than 2,000 LED lights.

The  stand-alone footwear department, called The Shoe Shop, features a wide variety of upscale footwear designers, including the likes of Prada, Salvatore Ferragamo, Canali, To Boot New York, Tod’s and others.

The expanded Ottawa store is now one of Harry Rosen’s largest locations. Rosen’s Toronto flagship measures a whopping 55,000 square feet, making it one of the world’s largest premium menswear stores. The company is spending over $100 million expanding and renovating its entire fleet of stores. It will completely overhaul its Downtown Montreal and Vancouver locations, for example. Its Montreal store will grow to become the company’s second-largest, rivalling the world’s best men’s stores. Its Vancouver store, the second-highest selling in the chain, will be completely renovated and reconfigured. In total, Harry Rosen has 16 Canadian store locations as well as one outlet store in Mississauga. A second outlet store opens soon at Toronto’s Vaughan Mills.

Ottawa’s Rideau Centre is undertaking a massive expansion which will eventually include new retail anchored by a 105,000 square foot La Maison Simons store and a 157,000 square foot Nordstrom store. Nordstrom is scheduled to open on March 6, 2015, next door to Harry Rosen. Simons will open in August of 2016.

Although Harry Rosen will see increased competition from the likes of Nordstrom and Simons, Rosen’s exceptional product selection and customer service will set it apart. The company spends more on staff training than any retailer in the country, according to CEO Larry Rosen, and its designer product selection will surpass that of any Ottawa retailer.