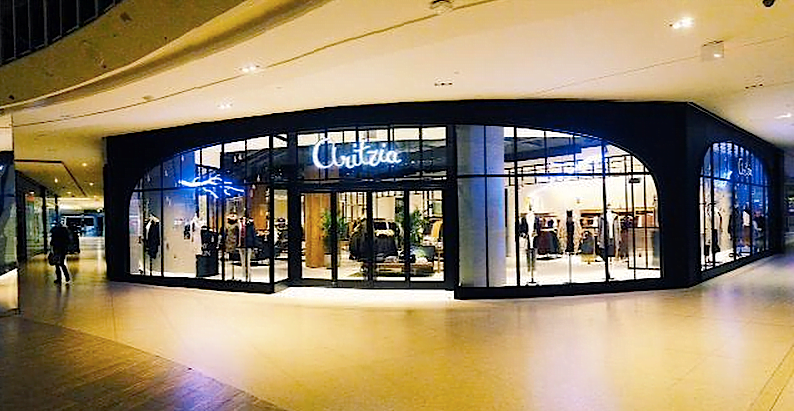 Located on the mall’s main level overlooking The Ice Palace, Aritzia’s new store is actually an expansion of its previous location. When Marciano‘s adjacent 3,310 square foot store recently became available, Aritzia decided to merge it with its existing 4,580 square foot space. After moving into a temporary location nearby, Aritzia gutted both shops to create a completely redesigned, unified flagship. Aritzia already boasted exceptional productivity at its Ice Palace location, which enjoys some of the highest pedestrian traffic in the busy mall.

Aritzia locations are designed individually, making each one somewhat unique in appearance. The West Edmonton Mall location features a light and bright aesthetic, including terrazzo flooring and an assortment of plants throughout the store. Fitting rooms are adorned in white oak, and the store features an impressive white marble cash desk. A custom-designed buck sculpture serves as a backdrop for the store’s lounge area, and a specifically curated collection of artwork is featured throughout the sales floor. Vintage-inspired furniture pieces are also featured at the front of the store, creating an artfully-inspired space showcasing an expanded assortment of women’s fashions.

Aritzia is in the process of expanding its current store base, including opening free-standing stores for its TNA and Wilfred brands. This week, Wilfred opened its first Vancouver store, adjacent to Aritzia’s Robson Street flagship. Next month we’ll be interviewing Aritzia CEO Brian Hill on his plans for the retailer’s further expansion.

Aritzia now operates locations throughout Canada and the United States. In Canada, the retailer operates a total of 42 Aritzia stores, three TNA locations, and three Wilfred stores. The Greater Toronto Area has the most locations, boasting 17 Aritzia, one TNA, and two Wilfred locations. The Vancouver area has eight Aritzia stores, three TNAs and as of this week, one Wilfred location. Aritzia also operates 15 locations in the United States in major markets including New York City, Chicago, Dallas, Portland, San Francisco, Seattle and Detroit. Aritzia’s largest location in the world is on New York City’s Fifth Avenue, spanning approximately 13,000 square feet.

Watch for our article in early 2015, where we’ll interview Aritzia’s CEO to learn more about the retailers’s future growth plans.