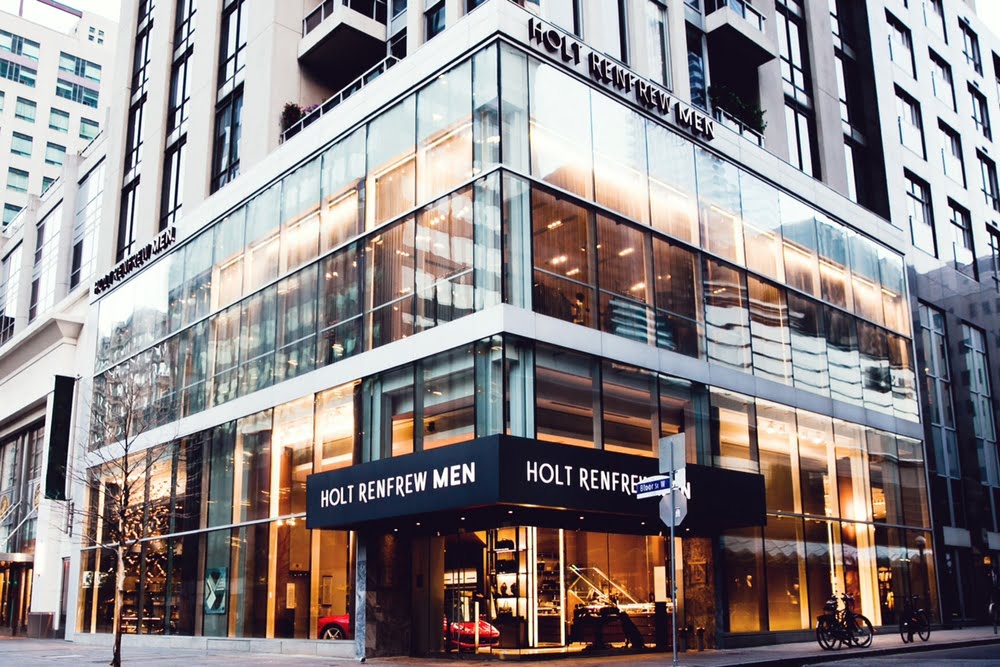 Holt Renfrew‘s first free-standing menswear store opens October 1 at 100 Bloor Street West, in the heart of Toronto’s ‘Mink Mile’. Called ‘Holt Renfrew Men‘, the store measures 16,500 square feet and features distinctive branding and luxury amenities, including its own doorman. Holt Renfrew is upping its game to compete with neighbouring Harry Rosen and other luxury retailers entering the Toronto market over the next two years.

The two-level store replaces Roots Canada which, until last year, occupied the prominent 100 Bloor Street corner location. We’re told that Holt Renfrew signed a long-term lease for the space, paying a premium for what is arguably ground zero for Canadian luxury retailing.

Holt Renfrew Men features its own branding, including a logo contained within a grey square, distinguishing it from Holt’s traditional logo, comprised of a magenta circle surrounding the HR logo. Its shopping bags and other packaging are grey, again distinguishing it from Holt Renfrew’s trademark magenta. The store also has its own website, www.holtrenfrewmen.com, as well as Twitter and other distinct social media.

The new store reflects a residential feel, featuring a mix of modern and vintage furniture and unique touches, such as fitting room walls upholstered in suiting fabric, and rotating installations of art and cultural objects. The store was designed by New York-based Janson Goldstein, which has been Holt’s store designer since the 2007 opening of its 140,000 square foot Vancouver flagship.

Menswear will also continue to be carried at Holt Renfrew’s flagship, a block east at 50 Bloor Street West. The flagship’s menswear collections will feature more ‘advanced sportswear’ collections such as Balenciaga and Givenchy, while 100 Bloor’s will provide more of a suiting and sartorial focus. The 180,000 square foot 50 Bloor flagship will be expanded and renovated over the next two years, including an interior overhaul and a replacement facade. Plans indicate that 37,000 square feet of additional retail space could also be added to the flagship via a passageway connecting the store to a rebuilt Cumberland Terrace, though nothing is officially confirmed.

Competing menswear retailer Harry Rosen is located directly across the street from Holt Renfrew Men. Rosen occupies a multi-level 55,000 square foot space, stocking several designers also carried at Holt’s. Nordstrom and Saks Fifth Avenue, both opening at the Toronto Eaton Centre in 2016, will also compete with Holt Renfrew Men. Both American retailers will sell pricey menswear — especially Saks, which plans to provide an elevated luxury shopping experience to Canadians beyond what is currently offered in its American stores. Both are geographically removed from Holt’s, however, being about two kilometres to the south.