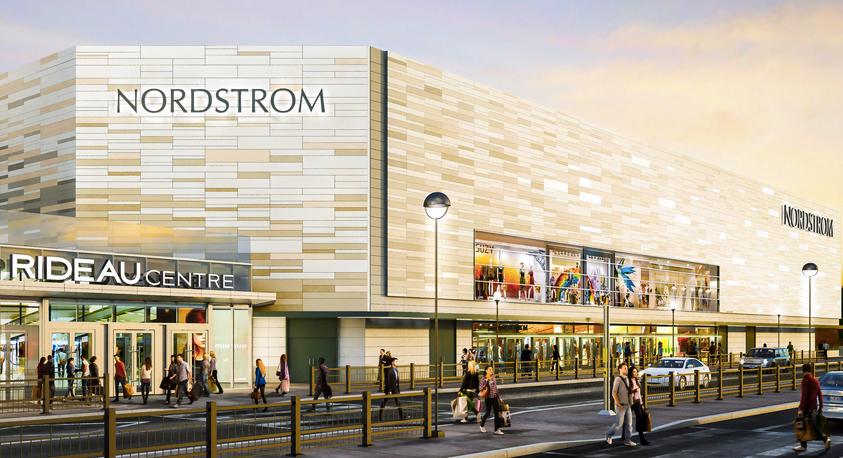 Nordstrom has provided us the list of brands it will carry at its second Canadian location, opening at 9:30am on Friday, March 6th at Ottawa’s Rideau Centre. Prices vary widely, from costly luxury designers to the affordable. Some brands will be only available at Nordstrom in Ottawa, including the retailer’s popular private-label collections that we’ll also discuss below.

The list of brands below is substantial, so we’ll break it down into categories. We’ll begin the list with footwear designers, since Nordstrom was founded in 1901 as a shoe retailer and continues to carry a substantial amount of footwear. We’ll then list brands for accessories, various women’s, men’s and children’s categories, and finish off by listing brands exclusive to Nordstrom in Canada, as well as a full list of Nordstrom’s private label brands. We’ll also briefly discuss which brands will be the priciest in each category.

If you’re looking to beat the opening day crowds, Nordstrom is hosting an early morning ‘Beauty Bash‘ beginning two hours prior to the store’s opening. Between 7:30 am and 9:30 am, Nordstrom will host an event profiling the expansive beauty department of its new Rideau Centre store. New products and trends from top names in beauty and fragrance will be featured, including instruction from the Nordstrom team of beauty experts. Complimentary consultations and demonstrations will be provided, and attendees can meet at Nordstrom’s main mall entrance. The event is complimentary.

As well, Nordstrom just announced the identity of its new Vancouver store manager. As well, it will hire about 1,000 people for the new Pacific Centre flagship, including 44 management positions. Applications for management positions will be accepted beginning next week, with further details at: www.careers.nordstrom.com.

And now, here’s a list of designers to be carried at Nordstrom’s Ottawa store:

Women’s Shoes: Ottawa’s Nordstrom will feature three women’s shoe departments with footwear in sizes 4-13, with widths from ‘narrow’ to 2W. Its priciest women’s footwear brands will include Jimmy Choo, Manolo Blahnik, and Valentino. The complete list of footwear designers, provided by Nordstrom, include the following:

Men’s Footwear: Ottawa’s Nordstrom will carry men’s footwear in sizes 6-18, with widths ‘slim’ to 4E. Its priciest men’s footwear brands will include the likes of John Varvatos, Magnanni, and To Boot New York. The complete list of designers, provided by Nordstrom, include the following:

Children’s Footwear: sizes will vary from ‘infant 1’ to ‘youth size 6’, with brands including:

Handbags: A variety of designers will be carried, including some luxury brands priced into the thousands. Burberry, Alexander Wang, Chloe, and Jimmy Choo will be among the most costly, and Nordstrom’s list of handbag designers for Ottawa include:

Women’s Designer Apparel: Ottawa’s Nordstrom will feature a number of pricey designers in its top-priced women’s department, Collectors, including the following:

Women’s Apparel: More moderately priced women’s apparel brands (although some are still pricey) will include the following:

Ottawa’s 157,000 square foot Nordstrom store will feature beautiful, modern sunlit interiors. Its floors will be tiled instead of carpeted, allowing for flexibility to expand or shrink each department in response to local demand.