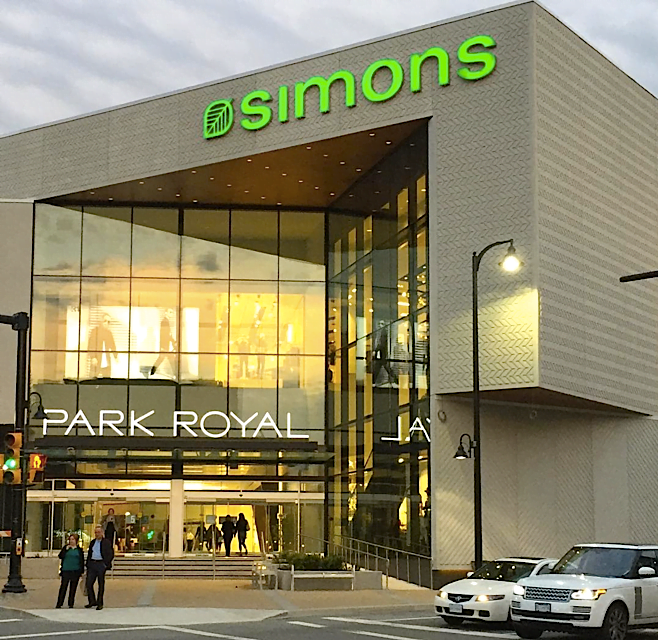 Simons Park Royal is the retailer’s second store outside of the province of Quebec. West Edmonton Mall was the first when it opened in October of 2012.

Simons will continue its Canadian store expansion outside of Quebec. In March of 2016, it will open a 113,000 square foot Mississauga Square One location and in August of 2016, a 100,000 square foot store at Ottawa’s CF Rideau Centre.  In 2017, Simons will open a 92,000 square foot location at The CORE in downtown Calgary, as well as a second Edmonton location, measuring about 100,000 square feet, at Londonderry Mall. In 2018 it will open a store at Toronto’s Scarborough Town Centre and in 2019 at Toronto’s Yorkdale Shopping Centre. CEO Peter Simons says that the retailer could eventually open locations in Winnipeg, Regina, Saskatoon, and the Maritimes.

West Vancouver-based author/artist Douglas Coupland designed ‘The Bow Tie’ sculpture that hangs from the ceiling in the store’s central atrium (photos above).

A 50-seat in-store café called Éve (photos above) features French-Canadian inspired food, as well as views of Lions Gate Bridge and Ambleside park from its second-level location. The café also features an exhibit of 15 pieces of art from students of Vancouver-based youth-focused Arts Umbrella. Simons has a three-year commitment to the Arts Umbrella Art Lending Program, according to Modern Mix.