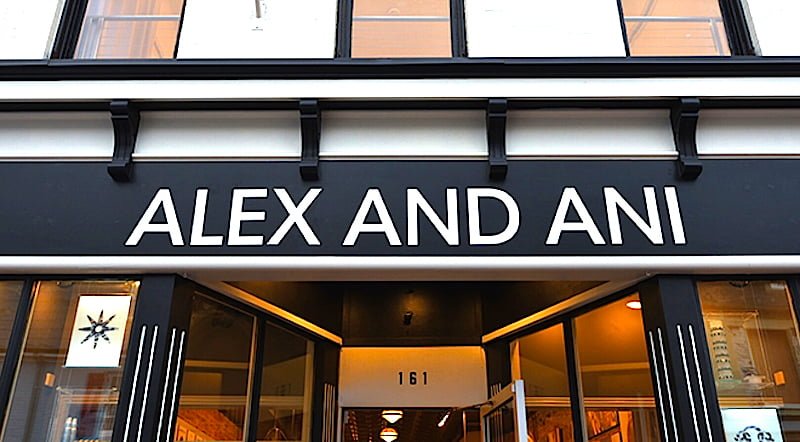 American jeweller Alex and Ani enters Canada this month with two confirmed freestanding locations. The company says that more will follow as it evaluates the Canadian market.

Founded in Rhode Island in 2004, the brand is known for its “eco-conscious, positive energy products that adorn the body, enlighten the mind and empower the spirit”, according to its website. Designer Carolyn Rafaelian founded the company, and the brand’s name comes from a combination of the first names of Ms. Rafaelian’s two daughters. Designs include bangles, bracelets, necklaces, earrings, and rings. Remarkably, bracelets feature a patented sliding mechanism that replaces the traditional clasp, making each bracelet ‘one-size-fits-all’. All Alex and Ani products are made in the United States.

The company first came to national attention in 2004 when it produced a necklace featuring an apple for Gwyneth Paltrow, following the birth of her daughter, Apple, leading to a large number of orders of similar merchandise.

Alex and Ani has recently seen substantial growth. Between 2010 and 2012, the brand increased sales from U.S. $4.5 million to U.S. $80 million, with its labour force increasing from just over 20 to more than 600. The brand boasts 55 freestanding U.S. locations, and wholesales in hundreds of retailers internationally. In Canada, Alex and Ani can be found in a variety of smaller retailers as well as at selected Hudson’s Bay locations and at Nordstrom.

This month, Alex and Ani opens its first two Canadian locations, both in the Toronto area. Its first location just opened at Upper Canada Mall in Newmarket, and a location at Toronto’s Yorkdale Shopping Centre will follow in a few days. According to Colleen Lewis, Vice President of Global Retail, Alex and Ani is opening Canadian stores after recognizing that the brand had a substantial number of Canadian customers shopping at its U.S. locations. When asked if Alex and Ani would expand beyond Toronto, Ms. Lewis said that the company will “continue to explore opportunities for growth”, and that when searching for store real estate, it seeks “the best and most compelling shopping districts to have the brand available for our clients”. The company currently has a mix of street and mall locations, she noted.

A floor plan on the website for Mississauga’s Square One (above) indicates that Alex and Ani will open in 2016 in the mall’s new southwest expansion wing, which will be anchored by Holt Renfrew and Harry Rosen. Square One, along with Upper Canada Mall and Yorkdale Shopping Centre, are all owned/managed by Oxford Properties Group.

Ms. Lewis also noted that for the first time in Canada, the entire Alex and Ani collection will be available not only in its brick-and-mortar stores, but also through its website (www.AlexAndAni.com), which now ships to Canada.

Canadian Retail News From Around The Web: December 7, 2015