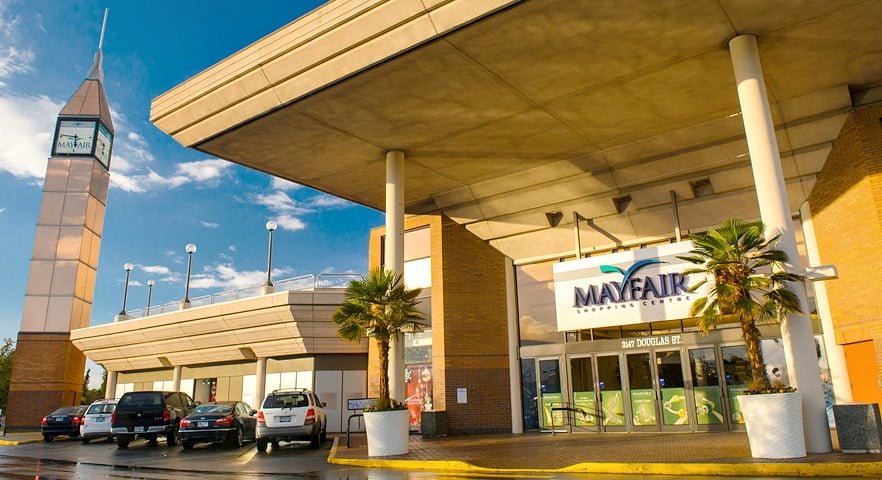 Ivanhoé Cambridge has announced that Mayfair Shopping Centre in Victoria, BC, will see a $72 million overhaul that will be completed by the fall of 2018. The project will include an expansion of the mall’s retail space, more parking, improved property access points, and renovations to the existing mall’s interior. The mall will remain open throughout the construction.

Mayfair Shopping Centre will be expanded by 100,000 square feet, bringing its gross leasable area to about 554,000 square feet from its current 454,000 square feet. The expansion will take place along the mall’s Douglas Street frontage, and will be anchored by two new large format stores that have yet to be revealed. Discussions are ongoing with several brands that are seeking to establish flagship locations, according to landlord Ivanhoé Cambridge.

More parking will be added to the centre, with two levels of additional rooftop parking to be constructed that will be connected by a new access ramp off Finlayson Street. The new access will improve the overall functionality of the existing roof parking, which is currently only accessible from Tolmie Avenue.

To improve access points to the property, extra loading provisions for large format tenants will be provided, as well as a new set of escalators and elevators to improve the connection to the rooftop parking. A new short term pick-up and drop-off zone with taxi waiting areas will be created off Douglas Street to provide weather protected access to the main entry. The entry point to the lower level parking off of Douglas Street will be relocated to align with a new signal at Speed Avenue, and new and enhanced wayfinding signage will be provided at all key entry points.

The existing mall space will also see a comprehensive interior renovation, including new washrooms, flooring, wayfinding signage, paint, furnishings and enhanced lighting for the mall’s common areas. The internal renovation will also simplify the circulation of the common areas, according to Ivanhoé Cambridge.

Mayfair Shopping Centre features over 120 stores, including Vancouver Island’s only Banana Republic, Coach, MAC, Aritzia, Town Shoes, American Eagle, Aerie, Swarovski, and Pandora stores. The centre is currently anchored by Toys ‘R’ Us and a 166,000 square foot Hudson’s Bay store. The mall was originally built in 1963 as an outdoor centre with 27 stores and with Woodward’s as its anchor, and it was enclosed and expanded in 1974. The mall subsequently saw two more expansions that grew it to its current size, and Woodward’s became Hudson’s Bay when the former department store chain shuttered in 1993.

Craig Patterson - May 19, 2022
The store opens Wednesday of next week and is unlike any other in Canada, with natural light flooding through windows and a unique model that is a mix of product and food.

Craig Patterson - May 18, 2022
The sustainability-focused footwear and fashion brand has confirmed that it will open two stores in Canada this year as it launches an expansion into new countries following an IPO last year.

Spike of Insolvency Cases in Canada Could Signal More to Come for Retailers: Expert

Consumers in Canada Changing Spending Patterns Due to Inflation: Study/Interview