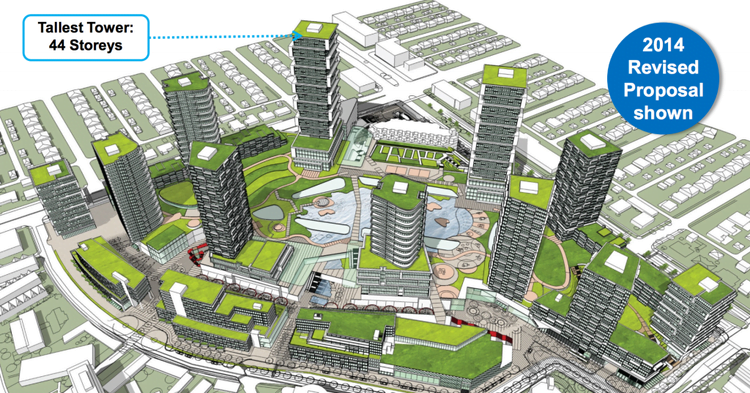 A proposed second-level retail expansion at Vancouver’s Oakridge Centre is no longer progressing as planned, after landlord Ivanhoé Cambridge discovered an underground aquifer beneath the mall site. An expansion is still in the works for Oakridge, though smaller than originally anticipated.

The mall’s retail component was originally supposed to grow by approximately 800,000 square feet, including a new second-floor retail level and a new department store anchor at its south end that was rumoured to possibly be a Saks Fifth Avenue or Bloomingdale’s. The second floor retail would have seen the existing 574,000 square foot mall expanded to about 1.365 million square feet, making it British Columbia’s second-largest mall after Metropolis at Metrotown. Ivanhoé Cambridge confirms that a ground-level westward expansion is still planned for Oakridge, though the mall will no longer gain a second retail level.

Ivanhoé Cambridge says that a recently discovered aquifer beneath the site is to blame, though the company also said that there would be difficulties keeping tenants on board during the planned eight years of construction. Now that plans for a second retail level have been scrapped, retailers will be able to continue to operate on the mall’s ground floor while the scaled-back residential construction progresses above.

Oakridge Centre is considered to be Vancouver’s most prestigious suburban mall, with freestanding locations for upscale retailers such as Tiffany & Co., Hugo Boss, Max Mara, and Rolex (at Montecristo Jewellers). The centre is anchored by a 182,000 square foot Hudson’s Bay and a 50,000 square foot Safeway grocery store. Target was originally supposed to move in to replace the mall’s former Zellers, though that was cancelled when Target shuttered its Canadian operations last year.