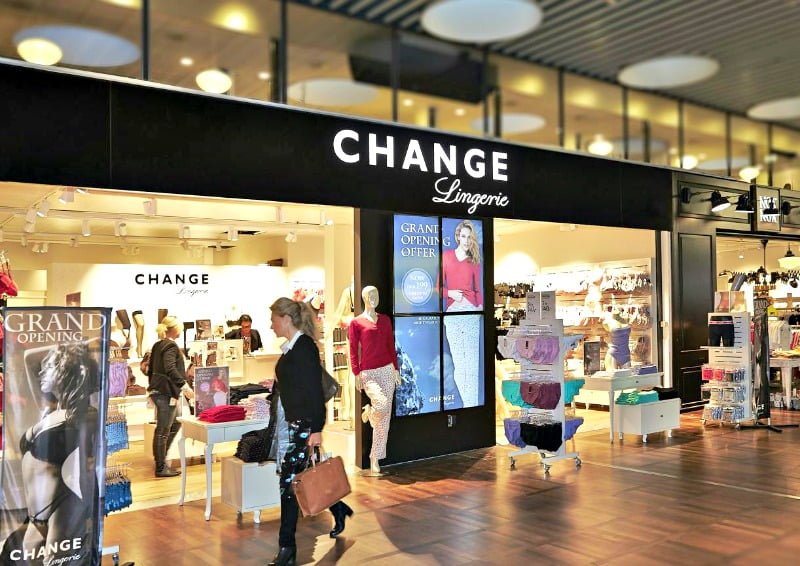 Danish lingerie and fashion brand Change of Scandinavia is planning a substantial Canadian store expansion over the next several years. The retailer’s goal is to roughly double its current store count, and it’s working with brokerage Think Retail on the expansion.

Change of Scandinavia is particularly unique because of its large bra sizes, which cater to a different niche than other lingerie retailers such as Victoria’s Secret and La Vie En Rose. About 75% of Change’s bras are in the DD to M cup size range, with a wide range of fits and styles. Most other lingerie retailers operating in Canada sell bras in the B-D range. Change stores offers free bra fitting to ensure that its products meet the needs of its diverse customers — and prices are kept reasonable to attract a broad clientele. Approximately 75% of Change’s revenue comes from underwear and bras, with the remainder from loungewear, swimmer, nightwear and stockings.

The Change of Scandinavia brand launched in Denmark in 1995, and its first freestanding retail store opened in Copenhagen in 2001. The company now operates more than 240 corporate and franchised stores globally. Most of its stores are in Europe and Scandinavia, with the exception of Canada and Singapore — the company has yet to enter the potentially lucrative US market. Change’s stores are modern and simple, featuring a black and white palette to showcase product.

Change entered the Canadian market with its first store in 2006. It now operates 15 stores nationally, with five in British Columbia (Vancouver x 2, Burnaby, Coquitlam and West Vancouver), one in Saskatchewan (Saskatoon), five in Ontario (Toronto x 2, Thornhill, Oakville, Burlington), and four in Quebec (Montreal x 3 and in Saint-Jean-sur-Richelieu). Recently-opened stores include the March 2016 opening of a 1,200 square foot flagship at Montreal’s Place Montreal Trust, as well as  the summer 2016 opening of a 600 square foot store at upscale Park Royal shopping centre in West Vancouver.

The company has also confirmed that this summer, it will open a 550 square foot store at CF Carrefour Laval, north of Montreal. Change will occupy part of the retail space currently occupied by luggage/bag retailer Bentley, with Spanish accessories retailer Uno de 50 to occupy the remainder of the space.

Reitmans Emerges from Restructuring with Eye to Future Growth: Interview

Grocery Shelves in Canada are Alright Despite the Fearful Narrative: Sylvain Charlebois