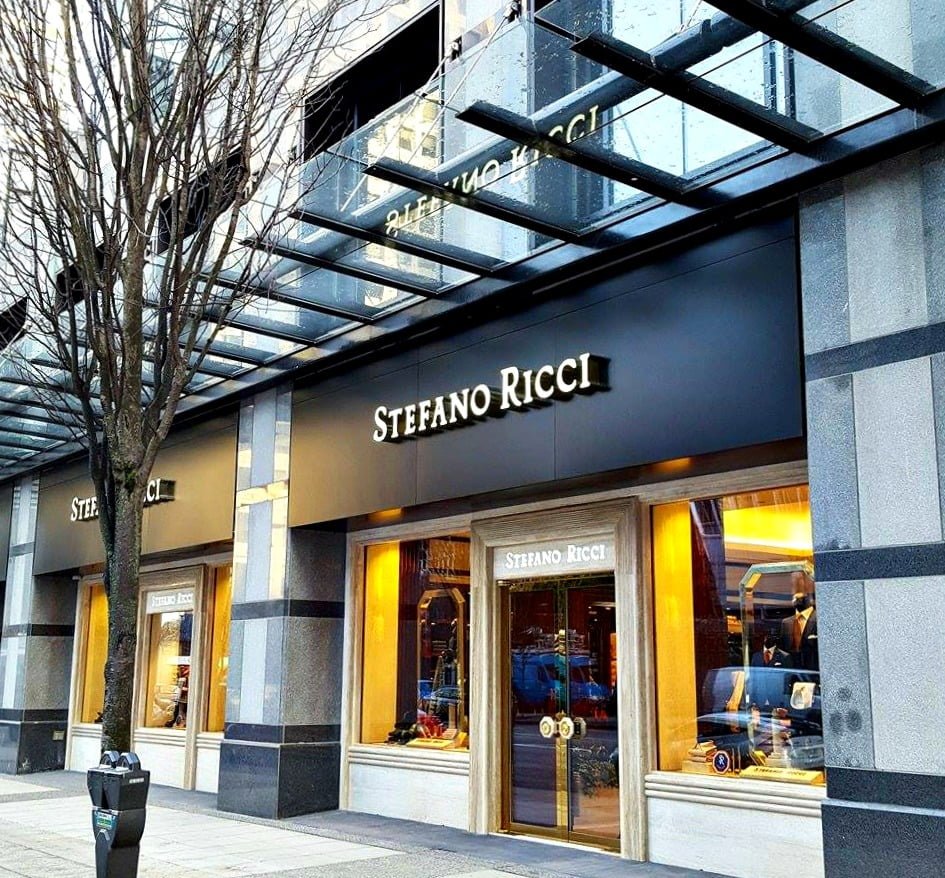 Ultra-luxury Italian brand Stefano Ricci has opened its first Canadian store, in Vancouver. The 2,600 square foot boutique is located at 1139 West Georgia Street, next to the new Trump Tower in the city’s expanding ‘Luxury Zone’.

The store features Stefano Ricci’s pricey menswear as well as fragrances, accessories (such as leather goods and cuff links) and home goods such as porcelain and crystal dinner services, silverware and luxury linens. Every item in the store is made by hand in Italy, using the highest quality of materials. Stefano Ricci has been described as ‘the Rolls-Royce’ of clothing, with stratospheric prices that include a crocodile skin jacket in the store that retails for about $150,000.

Interior features include ample burled California walnut wood, along with custom millwork imported directly from Italy. The store is co-owned and operated by Manuel Bernaschek, owner of popular Vancouver-based Showcase Pianos. The Vancouver lease deal was coordinated by Martin Moriarty and Mario Negris of CBRE Vancouver.

Stefano Ricci joins a number of luxury brands that have opened in Vancouver’s ‘Luxury Zone’ over the past 24 months, centred on Alberni Street as well as adjacent Burrard Street and Thurlow Street. Rolex, Prada, Versace, Brunello Cucinelli, Moncler, Jaeger-LeCoultre, and others have recently opened, with several more luxury brands to be announced for the area in the coming months. The hotel component of Vancouver’s Trump International Hotel & Tower is set to open this week, as well.

While there are no immediate plans for more Stefano Ricci locations in Canada, Mr. Bernaschek said that there’s a possibility that Toronto could be the next Canadian city to see a Stefano Ricci boutique.

Founded as a tie-manufacturing firm in Florence (by designer Stefano Ricci) in 1972, the family-run company “strives for quality to the point of perfection” — with prices to match. Attention to detail is key and the brand only uses the finest leathers, skins and fabrics. It retails menswear (including suits, dress shirts, jeans, polo shirts, casual wear and neckties), accessories (including leather goods and cufflinks), fragrances and home goods such as porcelain and crystal dinner services, silverware and luxury linens. The brand currently operates three North American locations — in New York City, Beverly Hills and Las Vegas, with a fourth set to open soon in Miami. The remainder of its stores are in Europe, the Middle East and Asia.

Craig Patterson - October 4, 2022
The store will be steps away from Birks which currently houses a Van Cleef & Arpels boutique, and is part of an investment by parent company Richemont to open standalone stores in Canada.

Virtual Job Fairs in Toronto for Retail and Hospitality/Food Service: October 26 and 27th