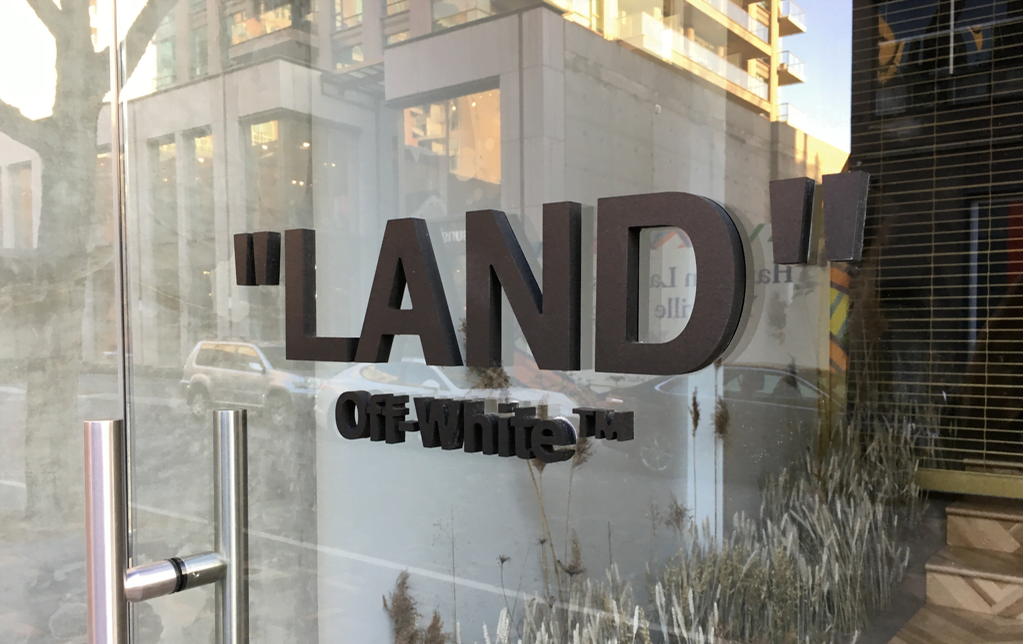 Luxury streetwear brand Off-White has officially opened its first North American store in Toronto’s upscale Yorkville neighbourhood. We sat down with Off-White’s founder and creative designer Virgil Abloh to discuss the new store, as well as how youth culture is changing the face of Toronto and other global cities. We’ve also included a 3D camera tour of the space, courtesy of Warren Vandal.

Known for its edgy fashions that are a cross between “streetwear and high fashion”, featuring thick diagonal stripes, Off-White’s Virgil Abloh (who is also Kanye West’s creative director) launched the brand online in 2013 and held its first Paris showroom presentation in January of 2014. In the summer of 2015, Off-White expanded from exclusively menswear into womenswear and remarkably, made it onto the shortlist of the 2015 edition of the LVMH Prize for Young Fashion Designers. The company is owned by Milan-based New Guards Group.

Off-White’s new Toronto store is located at 83 Yorkville Avenue, in an area that is rapidly adding luxury retailers. Virgil Abloh says that he chose Yorkville over other areas of Toronto for a few reasons. “The Off-White brand is an updated luxury concept,” he said. “I show in Paris because it’s about this younger generation’s influence on high fashion.” He snapped up the Yorkville space because of its proximity to other luxury brands, instead of locating on trendier but less affluent Queen Street West.

It all makes sense though — Yorkville is booming. French luxury footwear and accessory brand Christian Louboutin opened nearby at 99 Yorkville Avenue in the summer of 2016, and Chanel will launch its new Toronto flagship across the street some time this summer. Jimmy Choo is also confirmed to be opening next to Chanel in 2018, with more luxury brand announcements to follow.

Mr. Abloh spoke at length about how the younger generation is changing the world of fashion, as well as cities themselves. “Youth culture is a powerful thing,” he said, noting that the younger demographic is able to “rebrand cities and give them a different light, as well as create new impressions of cities that have been here for generations”. He noted that there’s a “passing of the baton” with youth “developing new ideas that are redefining cities, globally.”

About Toronto, Mr. Abloh said it is a “city that I love, and I travel a lot. I have a lot of friends here, and I see the nuances. Toronto is different than cities in the US.”

Mr. Abloh explained the store’s design as featuring “overgrown nature” and having a “landscape that equates to the vibe” of the store. The store houses the brand’s entire collection for men and women, including clothing, footwear, leather goods and accessories. He explained that every Off-White store is different and that’s because they’re “not like a franchise, or McDonald’s. Each store reflects the city I’m in, which comes from my background in architecture”.

We coordinated a 3D tour of the Toronto Off-White space with Warren Vandal of GEOmarketing Solutions, who uses an innovative Matterport platform to photograph stores to make it appear that one is walking through the live space. Mr. Vandal is expanding his 3D photographic business to include retail stores, with a unique feature — products within the store can be tagged in the photo tour, with a link connecting them to an e-commerce site or other page. It’s a unique merger of brick-and-mortar and online that retailers may use to profile both store spaces as well as products.

Off-White’s Toronto store includes  a ground-floor space measuring about 2,400 square feet, as well as a further 2,150 square feet of space located in the building’s basement, according to marketing materials. CBRE‘s Arlin Markowitz and Jackson Turner acted on behalf of the landlord in a lease deal with Off-White.