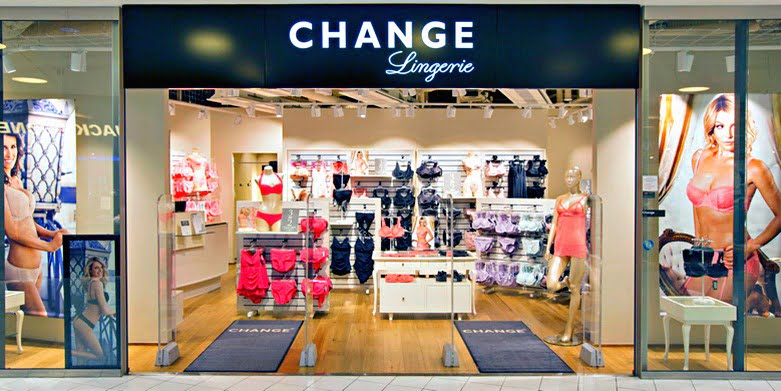 Danish lingerie and fashion brand Change of Scandinavia is confirmed to be opening at least three more stores in Canada in 2017, with plans for significantly more over the next several years.

The company continues to seek opportunities, anticipating to open between 8 and 10 Canadian locations in 2018. By the year 2020, Change is looking to operate between 25 and 30 Canadian stores, ideally in the 600 square foot to 1,000 square foot range in busy shopping centres. Targeted regions include British Columbia (Lower Mainland), Ontario (Greater Toronto Area) and Quebec (Montreal and Quebec City CMA’s).

Change of Scandinavia is represented by Tony Flanz of Think Retail for its Canadian real estate negotiations.

Founded in Denmark in 1995, Change of Scandinavia now operates more that 240 corporate and franchised stores globally. Stores are modern and simple, featuring a black and white palette to showcase product. Most of Change’s stores are in Europe and Scandinavia, with the exception of Canada and Singapore. The company still hasn’t entered the potentially lucrative US market.

Change of Scandinavia is particularly unique because of its large bra sizes, which cater to a different niche than other lingerie retailers such as Victoria’s Secret and La Vie En Rose. About 75% of Change’s bras are in the DD to M cup size range, with a wide range of fits and styles. Most other lingerie retailers in Canada sell bras in the B-D range. Change stores offers free bra fitting to ensure that its products meet the needs of its diverse customers — and prices are kept reasonable to attract a broad clientele. As well, approximately 75% of Change’s revenue comes from underwear and bras, with the remainder from loungewear, swimmer, nightwear and stockings.

Change entered the Canadian market with its first store in 2006, and it now operates 15 stores nationally, with five in British Columbia (Vancouver x 2, Burnaby, Coquitlam and West Vancouver), one in Saskatchewan (Saskatoon), five in Ontario (Toronto x 2, Thornhill, Oakville, Burlington), and four in Quebec (Montreal x 3 and in Saint-Jean-sur-Richelieu).

Reitmans Emerges from Restructuring with Eye to Future Growth: Interview

Grocery Shelves in Canada are Alright Despite the Fearful Narrative: Sylvain Charlebois