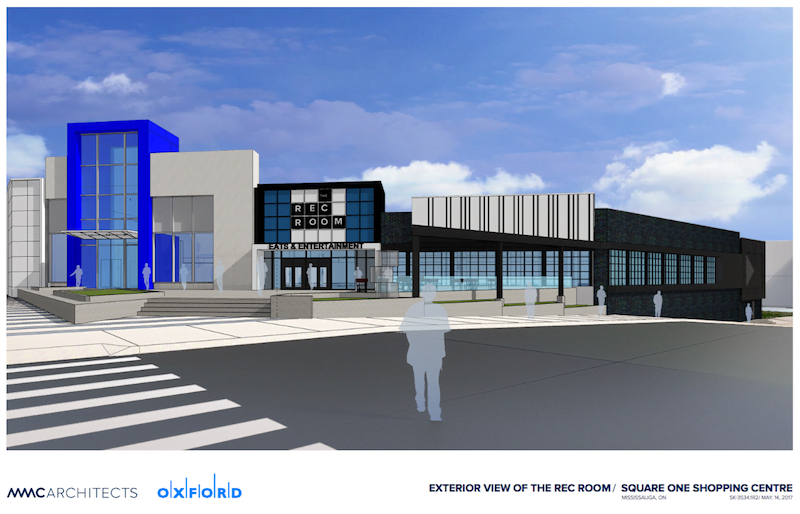 Cineplex-owned “eats & entertainment destination” The Rec Room has announced that it will open a 44,000 square foot two-level location at Mississauga’s Square One, in part of the mall’s retail space that was formerly occupied by Target. It’s addressing the trend of adding attractions to retail centres, and will be a welcome addition to burgeoning downtown Mississauga.

The Rec Room brings together multiple dining environments, amusement gaming, technology and live entertainment experiences in an auditorium-style space, all under one roof. Cineplex plans to open between 10-15 new Rec Room locations, each between 40,000 and 60,000 square feet, customized to the individual community. About half of the space is dedicated to dining and live entertainment, and half for amusement games and feature attractions.

The Rec Room at Square One will include:

“We are a passionate and genuine partner in creating and driving positive growth and development at Square One and in the Mississauga downtown core, which is why we are so pleased to be partnering with Cineplex on this exciting new venture that I know our guests will love,” said Greg Taylor, Director and General Manager at Square One. The Rec Room will occupy a portion of Square One’s former 164,000 square foot Target space, as per renderings in this article. Mr. Taylor described how downtown Mississauga is booming, and how Square One is at the heart of the burgeoning city. The Rec Room will also see traffic from nearby Sheridan College, not to mention thousands of new residential units that will be added to the immediate area in the coming years.

The Rec Room is also in line with landlord Oxford Properties’ initiative to roughly double the square footage of the food and beverage offerings in its centres. The Rec Room takes that to a whole new level, with an entertainment focus reminiscent of that offered at West Edmonton Mall.

Canada’s top shopping centres are now in the ‘entertainment industry’, adding non-retail amenities to attract and keep shoppers on site. It’s a trend discussed in Retail Council of Canada’s Shopping Centre Study which was released earlier this year. Square One ranked as one of Canada’s most productive malls in the study, with annual sales per square foot surpassing the $1,000 benchmark.

The Rec Room opened its very first location at Edmonton’s South Edmonton Common in the fall of 2016. It has announced that it will open future locations in downtown Toronto at Roundhouse Park, at West Edmonton Mall, at Deerfoot City in Calgary, and at CF Masonville Place in London. Yesterday, as well, Cineplex announced that it would open its first Rec Room in the BC Lower Mainland, at The Amazing Brentwood in Burnaby, east of Vancouver.