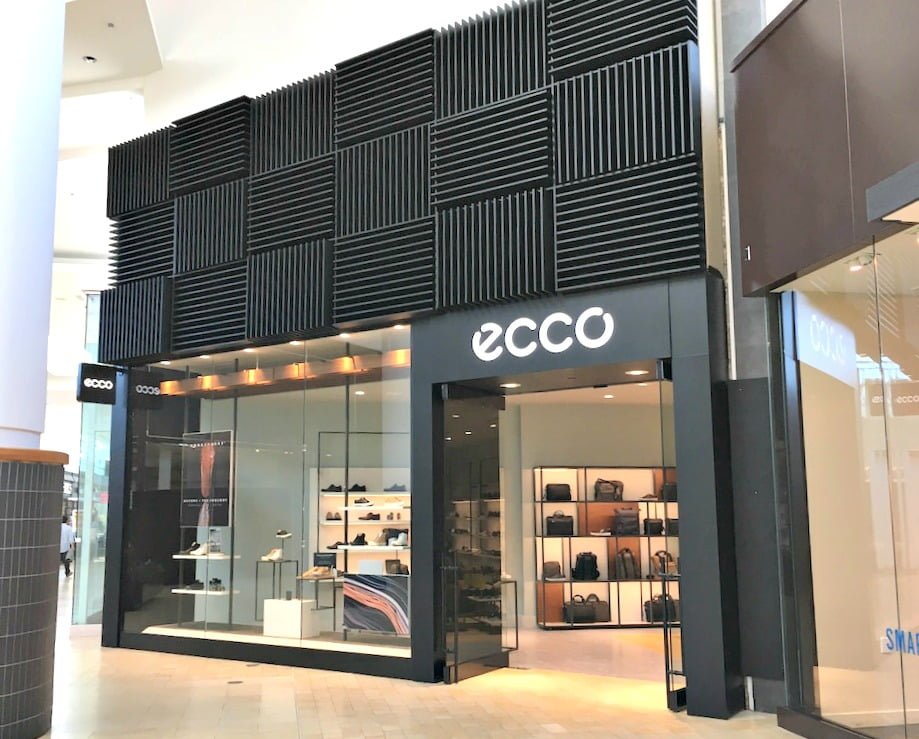 ECCO’s Prime concept is the company’s new flagship model, offering an expanded product assortment in an elevated retail environment. Yorkdale’s 1,550 square foot Prime location features a design that feels “distinctly Scandinavian,” according to the company, with design influenced by the brand’s roots in Tønder, Denmark, circa 1963.

The store’s bold, black facade features a unique patchwork installation over the display windows, made possible by Yorkdale’s soaring ceilings in that part of the mall. ECCO’s interior features a unique leather installation on the back wall that showcases the Toronto skyline. There are two seating areas in the store, and specially-designed modular wall fixtures allow for product display flexibility. Danish design house Louis Poulsen coordinated the store’s display lighting — an important component to optimally display the brand’s products.

Besides carrying ECCO’s typical offerings, the Yorkdale store also features footwear styles for children, golf and other sports styles. It also features a leather goods and accessories area — the second of its kind in Canada, following the opening of an ECCO accessory store in Vancouver last year.

Jordan Searle, President of ECCO Shoes Canada, noted that over the past year, ECCO’s Canadian operations have grown by 12%, and that there are plans for further expansion. ECCO is relocating its downtown Montreal store into a new location that will measure about 1,700 square feet, making it the company’s largest unit in Canada when it opens. The new Montreal flagship will also feature a dedicated leather goods and accessory shop-in-store.

In 2018, as well, ECCO will open two more Canadian stores — an Edmonton store will open at the Premium Outlet Collection at Edmonton International Airport in the spring of 2018, and a location at Quebec City’s Galeries de la Capitale will also open next year.

ECCO currently operates 31 stores in Canada, and in a recent interview, Mr. Searle revealed that the company plans to eventually operate about 45 Canadian stores as it continues to open a handful of locations each year in this country.

In May of this year, ECCO announced the appointment of a new global CEO, Steen Borgholm. Founded in Denmark in 1963, ECCO is unique in how it manages every aspect of the value chain from tanneries and shoe manufacturing to wholesale and retail activities. ECCO’s products are sold in 88 countries from over 2,000 ECCO shops and more than 14,000 sales points. The company is doing exceptionally well — in 2016, it saw the number of shoes sold increase by 5% over the year prior, while currency-adjusted sales through brick-and-mortar boutiques increased 10%, and online sales growth increased by 46%. ECCO opened about 100 new concept shops (including partner stores) last year.