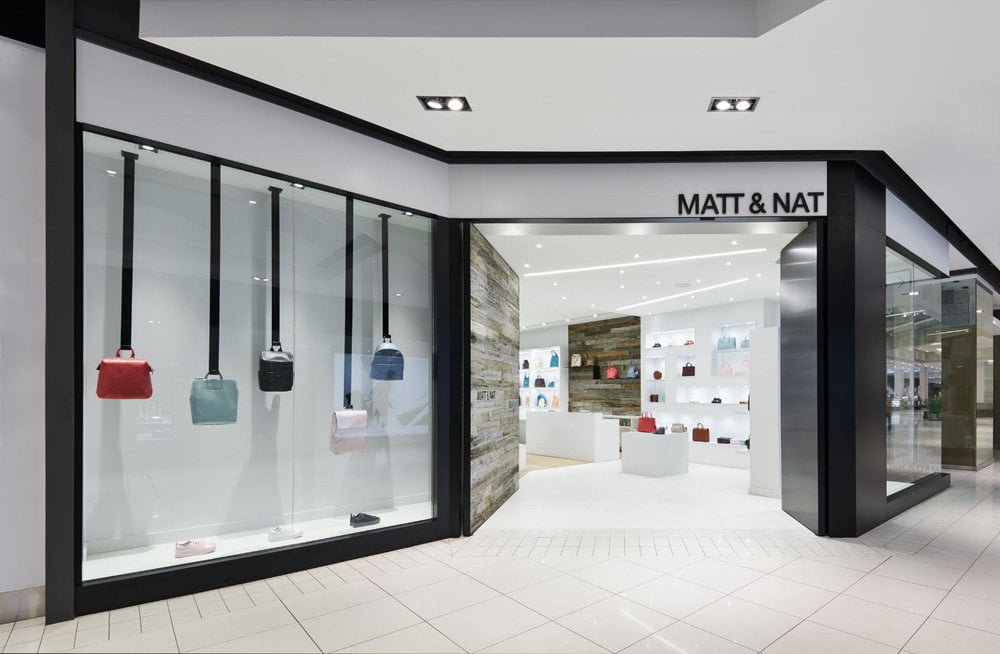 Montreal-based eco-friendly accessory fashion brand Matt & Nat is launching a freestanding store expansion that will see multiple locations open in various new markets. Next month, the company’s first GTA store will debut in Mississauga, followed by its first outlet location that is scheduled to open in the fall.

Matt & Nat (short for “mat(t)erial” and “nature”) was founded in Montreal 1995, and is known for not using leather or any other animal-based materials in its bag and accessory designs. Since 2007, it has been committed to using linings only made out of 100% recycled plastic bottles, and it recently introduced recycled bicycle tires to its collections. Having launched as a bag and small accessory brand, Matt & Nat now also features footwear designs. The company wholesales to retailers in Canada as well as globally, and it also has a robust ecommerce business at mattandnat.com/shop.

Matt & Nat’s newest location, set to open this summer at Mississauga’s Square One, will measure 1,423 square feet. The Square One boutique will be located next to Aritzia’s Wilfred retail concept. According to Matt & Nat’s General Manager of Retail, Sacha Singh, more GTA locations are expected to follow, and the company’s expansion will be careful so as to pick the ‘right’ locations. Mr. Singh noted that the company’s retail expansion will be methodical and will initially focus on Ontario and eastern Canada, prior to moving into any other markets.

Square One is one of Canada’s largest, busiest and most productive malls in terms of sales per square foot, according to Retail Council of Canada’s Shopping Centre Study. In the spring of 2016, the mall debuted its new Holt Renfrew-anchored ‘luxury wing’, and landlord Oxford Properties also recently announced that entertainment concept The Rec Room will be opening in part of the space once occupied by Target.

Mr. Singh also confirms that Matt & Nat will open its first outlet store this fall at Premium Outlets Montreal, in Mirabel. The 2,300 square foot retail space will be located near locations for luxury brands Salvatore Ferragamo, Hugo Boss and Gucci. Premium Outlets Montreal is considered to be the leading outlet centre in the Montreal area, and is one of two such centres in Canada operated by Simon Property Group (the other is Toronto Premium Outlets).

Brands are increasingly opening freestanding stores, and some brands are finding this to be a win-win strategy for both the brand as well as multi-brand retailers. At Retail Council of Canada’s STORE Conference this spring, panelists discussed some of the benefits to opening freestanding stores while also wholesaling to other retailers. In many instances the relationship is harmonious, with brand stores helping build awareness of the brand, leading to increased sales at both multi-brand wholesalers as well as at the individual brand store. Matt & Nat has a strong wholesale business that is expected to expand substantially, particularly given the increased propensity for consumers to seek out vegan products in Canada.

*All photos by Photolux Studio