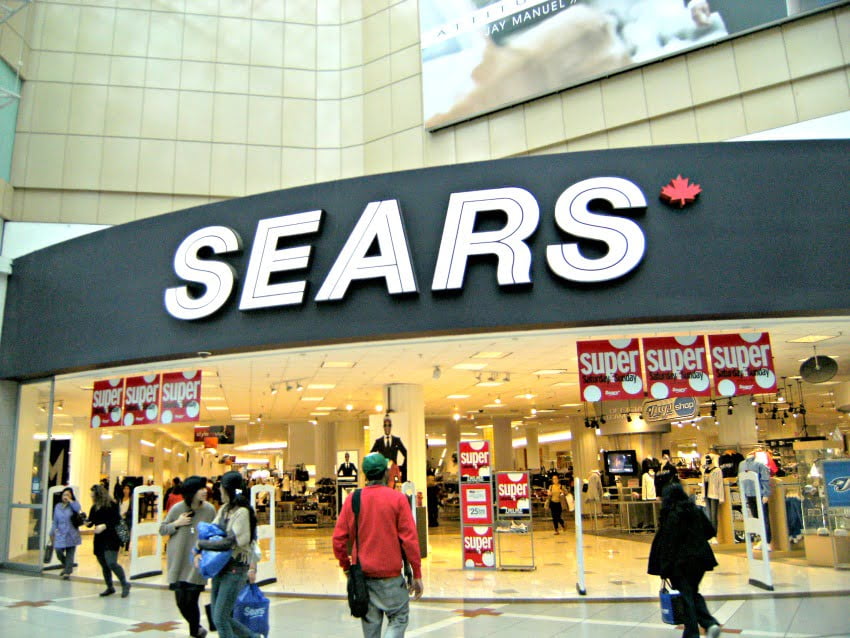 Last month, Sears Canada filed for bankruptcy protection, following comments that it had “significant doubt” about its future as a retailer. Reportedly, two major REITs, RioCan and Primaris Management Inc., are interested in possibly acquiring some of Sears Canada’s real estate at their own properties. Sears Canada has been granted the green light to explore possible sales, which may involve selling off some of its more valuable real estate.

Sears Canada has sold a number of its top properties over the past several years in order to help keep it afloat. Headlines were made in the spring of 2012 when Sears announced that it had sold three leases to landlord Cadillac Fairview for $170 million and as a result, Sears stores were closing at Calgary’s CF Chinook Centre, at Ottawa’s CF Rideau Centre, and at Vancouver’s CF Pacific Centre. It was eventually revealed that these would become home to Nordstrom’s first Canadian stores, with CF Toronto Eaton Centre’s Sears subsequently announced to become another Nordstrom flagship, while Sears’ CF Sherway Gardens store was acquired and subdivided for the 2016 opening of Saks Fifth Avenue and Sport Chek. A number of other Sears stores have since been closed.

Despite having sold off some of its most valuable real estate, including several former downtown Eaton’s flagships, Sears Canada continues to hold a number of valuable properties (both leased and owned) that could be repurposed, if the Sears Canada chain shutters completely.

A number of Sears properties are located in some of Canada’s most productive malls in terms of sales per square foot, as analyzed in Retail Council of Canada’s Shopping Centre Study. An update to that study will be released this fall, using the first study as a benchmark.

The following is a discussion of some of Sears Canada’s most valuable retail spaces that continue to be operated as Sears stores, including some possibilities to repurpose these spaces.

While the 637,000 square foot downtown Vancouver Sears store at CF Pacific Centre has been repurposed for a 230,000 square foot Nordstrom flagship with offices above and retail in the concourse below, a number of valuable Sears properties remain in British Columbia. In the summer of 2013, Sears Canada’s 217,000 square foot Metropolis at Metrotown location was announced to be redeveloped at a cost of over $1 billion, which would include a newly-built Sears store as well as a number of residential towers. Nothing has taken place as of yet, though there is tremendous opportunity to capitalize on the existing 8.9 acre site.

Alberta is home to a number of valuable Sears leases. The 170,000 square foot Calgary CF Chinook Centre Sears became Canada’s first Nordstrom store in September of 2014, though nearby Southcentre, one of Calgary’s leading malls, continues to operate a 234,100 square foot Sears store on the property. Rumour had it that the mall’s Sears store would be redeveloped for multiple tenants including La Maison Simons, though nothing has officially been announced at this time.

Edmonton is home to three rather significant Sears locations. The massive 263,000 square foot Southgate Centre location possibly offers the most redevelopment potential, with a multi-level Sears store that could be subdivided into valuable multiple CRU space, as well as for a smaller anchor. West Edmonton Mall is currently home to a 149,000 square foot Sears store, near DSW Shoes in the mall’s original Phase I. Edmonton’s Kingsway Mall also houses a 241,900 square foot Sears store — landlord Oxford Properties will open Marshalls and Homesense in the former Target space this fall, and will no doubt have ideas for the Sears space if the retailer shutters as anticipated.

It should be noted that Edmonton is the only English-speaking metropolitan region in the country with a population in excess of 1 million that lacks a Nordstrom store. Edmonton is also home to a woefully small downtown Holt Renfrew store and if Holt’s decides to remain in the market, it might consider a larger store in a suburban mall.

Saskatchewan’s two largest cities, Saskatoon and Regina, are both home to large downtown Sears stores. The Saskatoon Sears store at Midtown Plaza is about 116,600 square feet, occupying a prominent position at the opposite end of the mall from co-anchor Hudson’s Bay. Regina’s Cornwall Centre Sears measures 123,000 square feet over two levels, at the north end of the mall beside the Saskatchewan Drive entrance. Both locations were rumoured for La Maison Simons locations, though Simons’ Canadian expansion has slowed from years past.

A number of suburban malls in the Winnipeg area have Sears stores. There’s one that stands out in particular, however, given its size and location. The 263,000 square foot Sears at CF Polo Park occupies a prominent anchor position in the mall, and the mall itself is considered to be one of Canada’s most productive, with sales per square foot in excess of $900 annually. It’s unclear what redevelopment could take place for this space however — despite the mall’s exceptional location and productivity, the Winnipeg market hasn’t been identified by Nordstrom or Saks Fifth Avenue as a market to open any stores, at least not as far as we’re aware.

Ontario is home to a number of prominent Sears locations that could be redeveloped, if feasible. Several Toronto-area Sears stores have already been divested and repurposed — the massive 800,000+ square foot CF Toronto Eaton Centre Sears flagship, which once housed Eaton’s flagship, is now home to a 220,000 square foot Nordstrom, as well as other retail and offices. As mentioned above, CF Sherway Garden’s Sears is now home to Saks Fifth Avenue and Sport Chek, and Yorkdale Shopping Centre’s Sears is being redeveloped with multiple retailers including Restoration Hardware and Sporting Life. In Mississauga, Square One’s Sears is now home to a beautiful La Maison Simons, as well as a Sport Chek flagship.

A number of notable Sears Canada locations in the region remain, with exceptional redevelopment potential. CF Fairview Mall is home to a 149,550 square foot Sears, which some have speculated would become a Saks Fifth Avenue store as part of a mall repositioning. Though it might not happen, the mall is one of Canada’s most productive with sales per square foot exceeding $900 annually, and it’s located on major transportation routes near some affluent residential areas.

It’s worthy to note that adding full-sized restaurants to malls is a trend that we’re seeing (article to follow), as is adding entertainment centres to malls. The Rec Room is being added to centres such as Square One in Mississauga and at West Edmonton Mall, while Cineplex is adding VIP cinemas to some of its centres. Mexico-based children’s entertainment centre concept KidZania, as well, has indicated on its website that a Toronto location is “coming soon”, indicating a Canadian expansion that could potentially utilize empty retail space vacated by Target, as well as possibly Sears.

A number of other Ontario communities are also home to Sears stores, and one mall stands out — CF Limeridge in Hamilton, which ranked highly in Retail Council of Canada’s Shopping Centre Study. CF Limeridge’s Sears is about 143,640 square feet, according to leasing documents.

The Ottawa area is home to a number of Sears stores, including a 149,000 square foot store at the St. Laurent Centre. One concerning property is Carlingwood Mall, however — its only anchor exceeding 50,000 square feet is Sears, which has 179,300 square feet at the centre.

Sears has a number of stores in some prominent Quebec Malls. All of these are suburban — CF Carrefour Laval near Montreal is the most productive large suburban mall in the province, housing a 150,850 square foot Sears location. If Sears were to exit the mall, a number of new tenants could replace it — even Saks Fifth Avenue, which sources say could also be considering a suburban Montreal location.

Sears Canada is a staple retailer for many important malls in the Canadian Maritimes, and Sears’ possible demise would be devastating for some of these centres, not to mention the communities that they serve. Halifax Shopping Centre, in Halifax, houses a 106,400 square foot Sears store in a mall that sees in excess of $800 per square foot annually in sales (a reader recently told us that they saw ‘La Maison Simons’ on a future mall plan, though nothing is confirmed).

CF Champlain Mall in Dieppe, NB, is a top regional mall with a 107,000 square foot Sears. Regent Mall in Fredricton, NB, houses an 83,900 square foot Sears, as well as a Walmart. In Saint John NB, McAllister Mall’s only large anchor is a Sears store, which is concerning if it closes. And in St. John’s Newfoundland, the highly productive Avalon Mall is home to a 129,000 square foot Sears anchor, alongside Winners and a Cineplex theatre.

While the possible demise of Sears Canada is concerning (including substantial job losses), there is opportunity to repurpose some of Sears Canada’s existing real estate if the company shutters its brick-and-mortar operations. Opportunities to add more food and beverage options to malls, as well as entertainment concepts such as theatres and amusement parks, could help fill space, not to mention help drive traffic to some centres that are seeing declining footfall. Trends in Canadian shopping centres will be discussed extensively on Retail Insider in the coming months and as mentioned above, Retail Council of Canada will be releasing another shopping centre study this fall. There are sponsorship opportunities available and for more information, please feel free to contact Craig Patterson at cpatterson@retailcouncil.org.