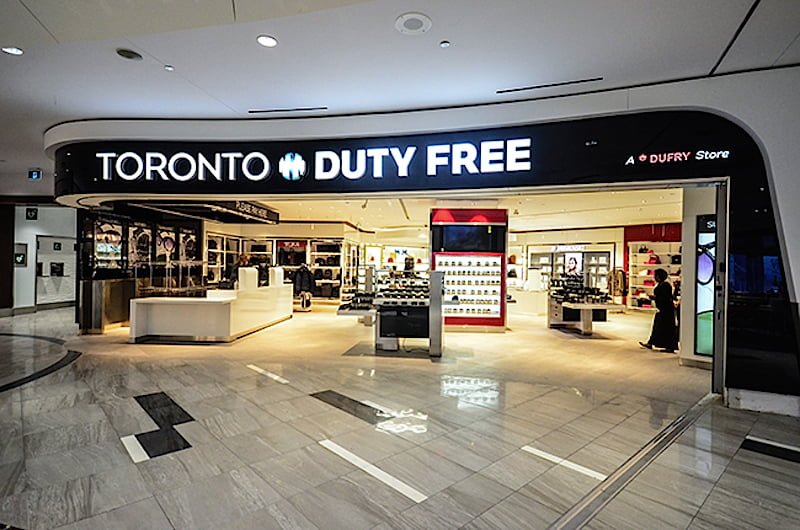 As the Canadian economy continues to pick up steam while the dollar remains low against the US greenback and other global currencies, Toronto has become an attractive destination for both locals and international visitors searching for luxury goods at reasonable prices. Revenue mix is one of three reasons why Toronto Pearson International Airport (“Toronto Pearson”) should invest in adding more luxury retailers as part of its plans to achieve a higher non-aeronautical revenue mix. The other two reasons focus on the retail mix and the use of technology as a marketing tool.

While Toronto Pearson continues its multi-year renovation of Terminals 1 and 3 with new retail options, there are no plans announced specifically in the luxury price category.  It has been over three years since the airport opened its cluster of luxury retailers at the international concourse of Terminal 1 near Gate E75 and E76. The retailers operated by the Nuance Group include:

This collection of stores complement the Burberry and Bvlgari stores located in Terminal 3’s international concourse near Gate C30.

Additionally, Michael Kors, Polo Ralph Lauren, and Salvatore Ferragamo are located near Gate C36. They are listed in the airport’s website store listing but not its directory map (shown above) or the mobile application.

The airport earned CDN$1,285.6 billion in revenue in 2016. While retail components (including restaurants and beverage establishments), forming part of the non-aeronautical revenue, increased by CDN$7.3 million to CDN$91.7 million, they only represented roughly 7% of all revenue generated for the year. This performance is significantly less than that of the top three most travelled airports in the world including Hartsfield Jackson Atlanta Airport (ATL), U.S. (2016: ~15%), Beijing, China (2016: ~30%), and Dubai, U.A.E. (2015: ~52%).

Without breaking down the numbers further, Greater Toronto Airport Authority (GTAA) would like to have its overall non-aeronautical revenue as a percentage of overall revenue to increase from the current 30% to 50%. This lofty goal may be hard to achieve without a higher priced product mix that luxury retailers can bring as indicated by sales per enplaned passenger of CDN$19.77 in 2016 (up 2.2% from 2015).

While Toronto Pearson included some luxury retailers at both terminals’ international concourses, the airport has not provided as many options for its domestic and U.S. bound travellers. Those that are not travelling internationally unfortunately do not have access to any high end retailers due to government and security regulations.

Additionally, the airport terminals are not designed to showcase shopping within a centralized departure hall after security. This may limit the number of passengers who choose to wait at their assigned gate areas instead of venturing somewhere else to shop. While Terminal 1 is considered the better furnished wing when it comes to luxury goods, it does not have some of the more popular luxury brands such as Harry Rosen, Holt Renfrew, Giorgio Armani, Empirio Armani, D&G, and Hèrmes as tenants.

Adding high end retailers may seem like a simple solution to improve reach, exposure and higher spending per passenger, but Toronto Pearson will also need to strategize on how to manage luxury shoppers who often expect more personalization.

The airport could take a page from London’s Heathrow Airport where it has introduced a dedicated shopping service in 2016 at its Terminal 2, The Queen’s Terminal facilities.  Once registered, passengers have access to services such as trained personal shoppers, expedited transfer and check in, home delivery and collect at return options. This unique service and other retail initiatives played the lead role in that airport’s financial growth with non-aeronautical revenue up 8.8% in Q1 2017.

Today’s shoppers are influenced by social media like Instagram and YouTube. Luxury retailers have been effective in drawing shopper’s attention through flashy campaigns made possible in a big space like an airport terminal with high ceiling height and showcased on social media.  Burberry, for example, introduced the world’s first Burberry Balloon as an exhibit at an airport to highlight its DK88 collection. This limited time installation has been an internet sensation for the brand (e.g. a simple Google search resulted in ~475,000 results) and also provides free promotion for the airport as an art and experience destination.  This effect has been magnified with the airport cross-promoting the installation through its social media and print channels concurrently.

When Toronto Pearson decides to add more luxury retailers, it would be important to showcase them as a collection or individually. Retailer Insider checked the airport’s Twitter, Instagram, Facebook and website and noted that there has been minimal coverage of the luxury retailers or the airport as a luxury shopping destination.  In addition, not all luxury brands listed the airport as an official store location in its website or through Google search. This makes for a more challenging shopper discovery process.

Toronto is the Canadian financial capital featuring some of the biggest shopping malls in North America.  Handling more than 44 million passengers a year allows Toronto Pearson the opportunities to offer a more diverse retail product mix. The luxury segment makes up only a small percentage of the total number of retail outlets currently occupied within the airport and is a prime target for growth.

The goal to improve non-aeronautical revenue as a percentage of the overall revenue can be achieved through introducing more luxury retailers for all airport users including shoppers, employees and travellers, building the airport’s reputation as a shopping destination through brand acquisition and improved services and using technology as a marketing tool to capture shoppers’ imagination that influential luxury retailers can bring.

Then and Now: 110 Bloor Street Retail Podium in Toronto [Photos]

Craig Patterson - May 12, 2021
The upscale retail podium built in 1980 has seen significant changes with luxury store tenants over years, with more to come.