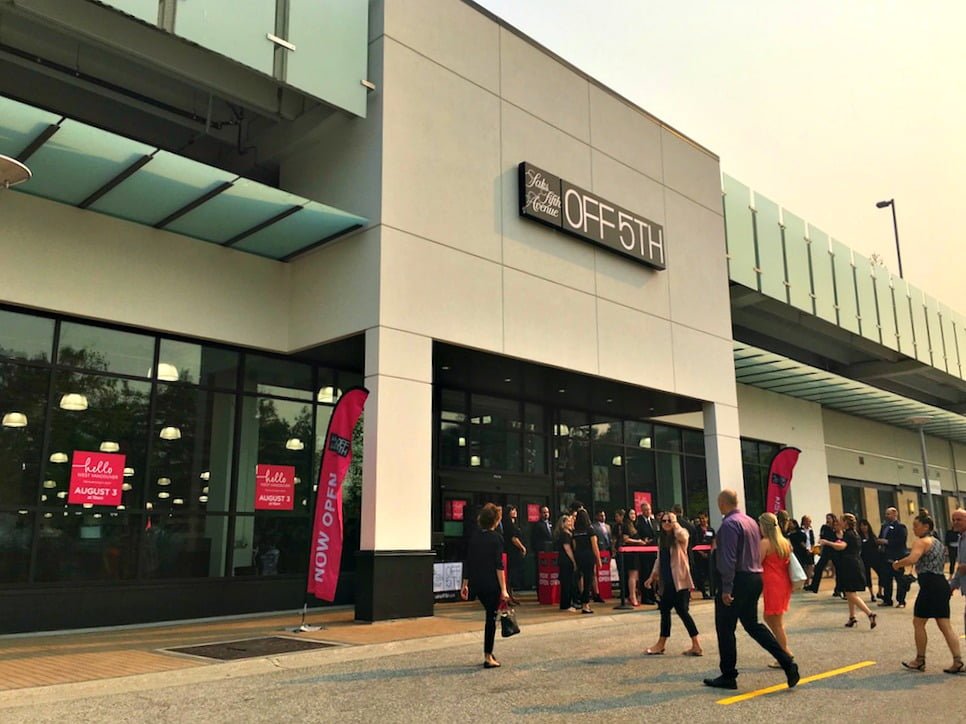 The Hudson’s Bay Company’s off-price concept Saks OFF 5TH has opened two more Canadian stores, bringing its current Canadian store count to 16. The company’s goal is to operate about 25 Canadian stores by the end of 2018 and given its momentum, that could very well be achieved.

Crowds lined up for two Saks OFF 5TH locations yesterday, and both were special openings. In Montreal at CF Galeries d’Anjou, Saks OFF 5TH opened its very first location to hundreds of excited shoppers, according to our Montreal correspondent Maxime Frechette. And at West Vancouver’s Park Royal, crowds witnessed the unveiling of a large Saks OFF 5TH which is only a short distance away from downtown Vancouver, and the second in British Columbia’s Lower Mainland.

The CF Galeries d’Anjou store spans about 30,000 square feet on one level, and is located in part of the mall’s former Target space (a 29,000 square foot Winners also just opened in the space, across from Saks OFF 5TH). The d’Anjou OFF 5TH is one of three confirmed locations for the retailer in the greater Montreal area — in the fall of 2018, a 44,840 square foot location will open in downtown Montreal and as well, a location will eventually open at Premium Outlets Montreal.

Crowds gathered at West Vancouver’s Park Royal for the opening of Saks OFF 5TH, which has more than 33,000 square feet of retail space in the mall’s ‘Park Royal North’ component. The unique indoor/outdoor Park Royal serves affluent populations on Vancouver’s North Shore, and it is also a relatively short car or bus ride from downtown Vancouver. With British Columbia’s only La Maison Simons, as well as other retailers not available downtown, Park Royal is a draw for much of the region.

Saks OFF 5TH plans to operate about 25 Canadian stores by the end of next year, and it is an achievable goal — the company’s first Canadian stores opened in March of 2016, growing to 16 stores in only 16 months. Saks OFF 5TH is somewhat unique in its real estate choices — while its American stores are typically located in outlet and freestanding locations, several of Canada’s Saks OFF 5TH stores have opened in mainstream shopping centres (including the Montreal and West Vancouver stores). Saks OFF 5TH is moving into more mainstream malls in the United States as well, as of late, including a location at Honolulu’s Ala Moana centre that opened in the spring.

Saks OFF 5TH’s current store locations are overwhelmingly in Ontario at the moment, though it has a location in British Columbia at Tsawwassen Mills as well as two stores in Edmonton, one store in Suburban Calgary, a store in Winnipeg, and a store at Quebec City’s Place Ste-Foy. Ontario locations are in the Greater Toronto Area as well as in Niagara and Ottawa.

Off price retail continues to see growth in Canada — TJX continues to rapidly open Winners and Marshalls locations in Canada, and competition will heat up early next year when Nordstrom Rack opens its first Canadian store in downtown Toronto. Nordstrom Rack plans to open between 15 and 20 stores in Canada over the next several years, providing Canadian consumers even more opportunity to acquire value-priced fashions and other items.

See below for more photos of Canada’s newest Saks OFF 5TH stores.