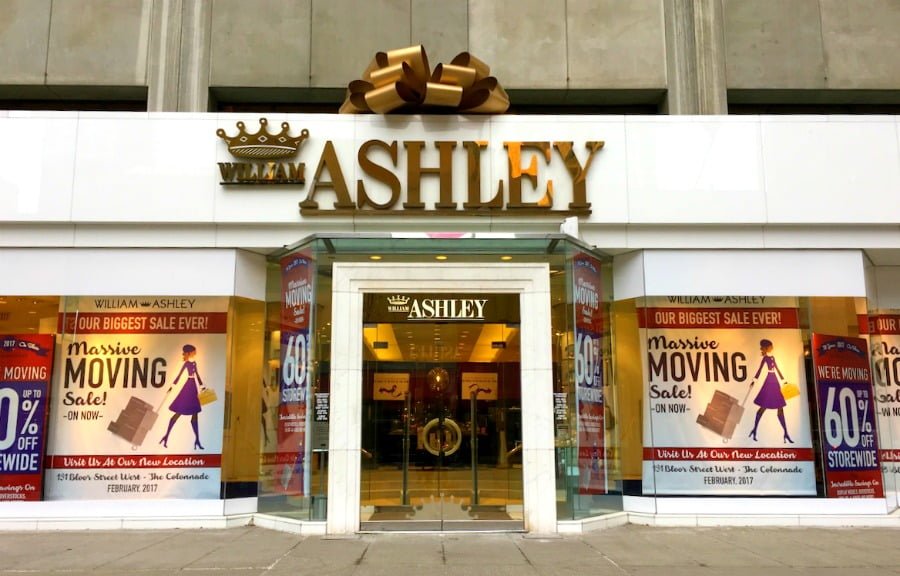 Upscale Toronto-based tableware and giftware retailer William Ashley is relocating its Manulife Centre store to a new space this year. Its new location will be in what some consider to be Canada’s most prestigious retail address — Morguard’s The Colonnade at 131 Bloor Street West. William Ashley will occupy a temporary ground-level space that will open to the public next month, while the company’s full-sized store is expected to open in about seven to eight months.

On February 1 of this year, William Ashley will relocate to a temporary 3,840 square foot retail space at 131 Bloor Street West, in part of the space formerly occupied by Sephora before it recently relocated up the street. The pop-up will operate for several months while a new, spectacular William Ashley is constructed, which will boast 23 foot ceilings, natural light and a new interior to showcase the retailers vast product assortment from some of the world’s top brands.

William Ashley’s new Bloor Street store will span two levels and about 15,000 square feet of retail space. Its ground floor will span about 1,000 square feet, taking over the current lobby space of The Colonnade. Teuscher of Switzerland chocolates, which is housed in the current William Ashley store, will move into part of the new street-level space. William Ashley’s 14,000 square foot second floor will encompass the current second level of the Herzig Eye Institute and adjacent retail, as well as the common area in The Colonnade as per the floor plan below. Natural light will flood the new space from unique oval south-facing windows in the current Eye Institute, while the north side of the store will feature ample exterior light from windows rising up to the floor’s soaring ceilings.

Toronto-based DesignAgency designed the new space, which it describes as having “a series of modern contemporary fixtures, environments and experiences wrapped and woven over two floors through the heart of the landmark Colonnade Building on Bloor Street,” going on to say that its goal is “to create an enveloping environment that is the very definition of William Ashley – all the while allowing the array of stunning products to tell their own unique stories.”

According to William Ashley’s president, Jackie Chiesa, the new Colonnade store will feature enhanced customer service experiences that will include technology, personalized services (including wedding registry, corporate services and interior design) as well as an entirely new store design to showcase William Ashley’s prestigious assortment of goods. There will be a private shopping area for customers who prefer privacy, as well as a ‘venue space’ to host special events.

Scott Harris, General Manager of Retail at Morguard said: “We are thrilled to welcome William Ashley to The Colonnade as part of the new line up of luxury retailers at the iconic building. William Ashley is the perfect complement to The Colonnade, adding the world’s finest Tableware and Home Decor brands to our international assortment,” also mentioning that “the Colonnade was Canada’s first mixed-use building featuring chic retailers.  From its opening in 1963 to today, an era of best-in-class retailers continues to serve the demands of Bloor Street shoppers seeking exceptional product.”

William Ashley is vacating its Manulife Centre retail space as part of the shopping centre’s $100 million overhaul, which will see expanded and renovated retail space, new retailers, and the addition of Canada’s first Eataly location on its second level.

We look forward to the opening of the new William Ashley store later this year at The Colonnade, and will provide updates including photos of what is expected to become one of Canada’s most beautiful retail environments. William Ashley will be neighbours with prestigious retailers at The Colonnade including Cartier, Mulberry, Escada, Black Goat Cashmere, Coach, and a substantially expanded Prada, as well as new store locations for Moncler and Christian Dior, both of which will open later this year.