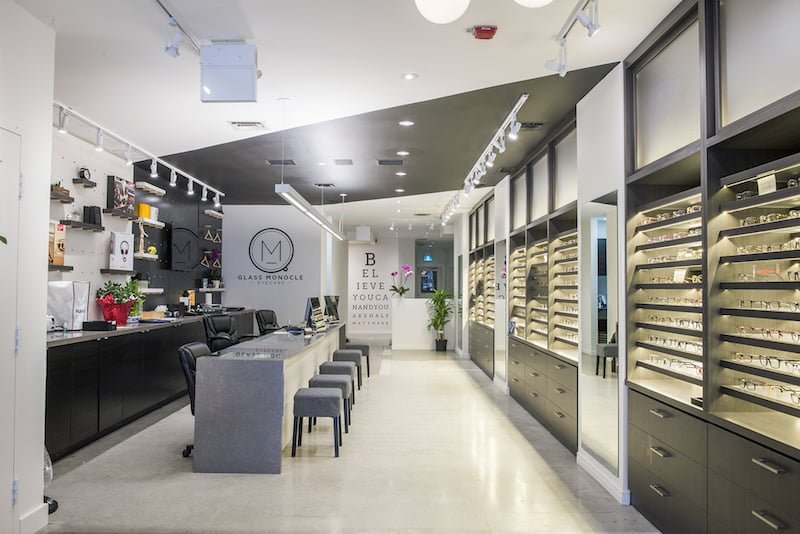 Toronto-based optical retailer Glass Monocle, which recently opened near the former Honest Ed’s, is already seeing success through personalized products and services – and a space that helps it standout. Its co-founders are contemplating expanding into multiple locations, after launching a branded store developed by BUILD IT.

Founded by opticians Kinnard Chan and Jacky Wong late last year, Glass Monocle features a modern 1,700 square foot retail space that is equally focused on offering trendy optical frames, as well as exceptional medical services. The founders, who are passionate about the optical industry, set out to create a more ‘localized’ experience to differentiate from large chains that dominate the industry.

The strategy appears to be paying off, with consistent five-star reviews on Google, Yelp and Facebook. Customers describe the store’s “attitude” and “vibe” in a positive way.

Mr. Chan explained the store’s ‘balance’ is between medical and fashion, which is different than many optical retailers. Traditionally, optometrists have opened retail operations with a selection of frames to choose from, which in some instances has been an afterthought to the clinic itself. On the flip-side, some eye glass retailers have focused primarily on styles, with little or even no focus on optical health.

Mr. Chan and Mr. Wong set out to create a retail concept that balances the medical side with the optical frame fashion side — a friendly service that also ensures that customers are being screened for optimal optical health, including testing for glaucoma and other eye diseases. On the fashion-side of the business, Glass Monocle stocks designer optical frames that are ‘on-trend’ with the demographics of the Annex community — an area with a mix of students, professionals and an increasingly affluent, urban demographic that characterizes much of downtown Toronto.

Glass Monocle’s co-founders worked with Alburt Lefebvre and Simon Shahin of BUILD IT to build out the designer 590 Bloor Street West store. Mr. Lefebvre explained that he assisted not only with the construction and design of the space, but even with securing the initial location in Toronto’s hot Annex neighbourhood. Once designs were ready, Mr. Chan explained that it took the BUILD IT team only six weeks to build-out the store — a remarkable feat considering the complexities involved in building such a retail space.

The store’s interiors are simple and functional, featuring a long cash desk (resembling a bar), bright lighting, and simple millwork against a white backdrop. The elegant, simple design sets off the fashion frames contained within. The front of the store is devoted to retail, with the middle area acting as a waiting area for patients to access medical services at the back of the retail space. Mr. Lefebvre brought in Toronto-based Aboveground to help coordinate the space, which his team at BUILD IT then executed for the client.

Mr. Chan and Mr. Wong are enthusiastic about the future, having been warmly received by customers and the local community. After creating a successfully branded retail environment, they’re looking into eventually expanding their concept into multiple locations. Bigger isn’t always better, explained Mr. Chan, and Glass Monocle will be mindful to keep its sights on what makes it unique while considering its options for growth.

Craig Patterson - September 16, 2021
Toronto-based footwear designer says he has weathered the pandemic by adding multiple US stores while tapping into lucrative handbag business.