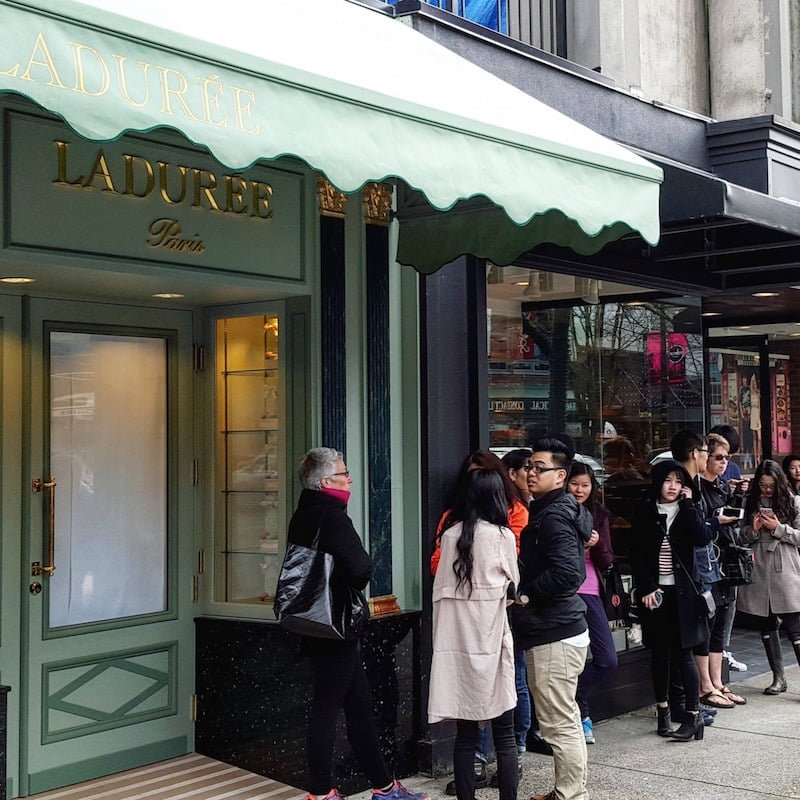 Holt Renfrew has unveiled the latest phase to open at its Vancouver CF Pacific Centre flagship, and has also revealed what’s in store for the rest of 2017. Included is newly expanded women’s ‘shoe hall’ with nine luxury designer boutiques, as well as Paris-based Ladurée, which will open its second Vancouver location inside of Holt’s this spring.

In April of 2015, Holt Renfrew announced that it would expand its CF Pacific Centre store by annexing about 40,000 square feet of space formerly occupied by Sport Chek/Atmosphere. The first phase of the newly expanded 188,000 square foot store opened in September of 2016, which included a new men’s store as well as a 3,500 square foot 80-seat Holt’s Café.

Holt’s has unveiled a second phase to the expansion, which includes an 8,500 square foot women’s shoe hall. Some of the world’s top luxury brands are featured in the new space, including nine luxury designer brand shop-in-stores by Aquazurra, Céline, Christian Dior, Christian Louboutin, Gucci, Manolo Blahnik, Miu Miu, Prada and Stuart Weitzman. The new shoe hall is about triple the size of the former department.

Holt’s describes the new space as having “seemingly endless sightlines,” that are “complimented by custom glass and metal fixtures throughout. Key to the space, are custom chairs and chaise lounges.”

The Vancouver Holt’s now boasts more footwear boutiques than any other Holt Renfrew location. The Square One store in Mississauga, which opened in July of 2016, features six women’s footwear shop-in-stores, while the Yorkdale store in Toronto has five.

New York City-based Janson Goldstein LLP is responsible for the CF Pacific Centre Holt’s overhaul, which will be ongoing well into 2017. The firm also designed the existing Holt Renfrew space, which opened to the public in the spring of 2017. Previously, Holt’s had occupied a 68,000 square foot store a block south in the same shopping complex.

This spring, French luxury bakery and sweets maker Ladurée will open its second Vancouver location in a space adjacent to the newly expanded Holt’s shoe hall. At 500 square feet, Holt’s Ladurée will be smaller than the 1,200 square foot Robson Street retail space that opened to massive crowds in March of 2016.