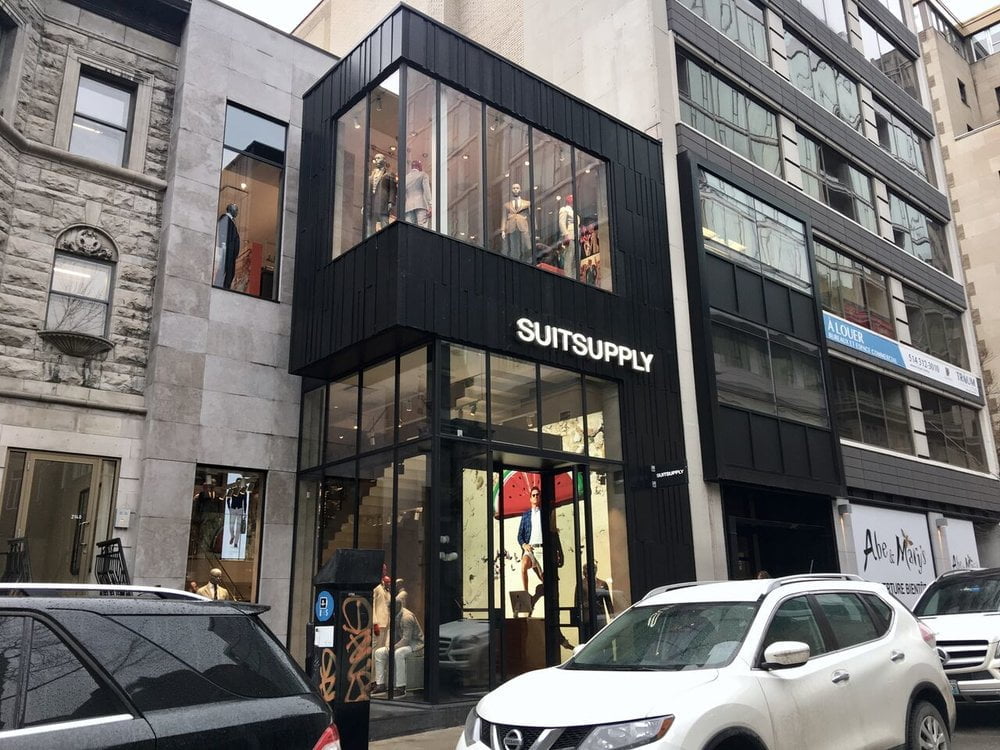 Nearly three years after opening its first Canadian location in Toronto, Suitsupply has opened its largest Canadian store in Montreal, at 2152 Rue de la Montagne. Hailing from Amsterdam, Suitsupply stands out with it’s relatively affordable prices and it’s vast array of suits and other fashions.

Spanning three levels in a completely renovated building, the new Montreal store features 4,163 square feet of retail space, making it one of the company’s largest locations. Stepping into the store is breathtaking — tall ceilings and dramatic stairways draw the eye to the store’s multi-level offerings, and the store’s large windows give the impression that the store is open to the outside.

The store’s interior has a “summer feel”, featuring muted wooden floors and bright colours throughout, including a variety of vibrant wallpaper styles. Furniture in the new space is charming, playful and eclectic.

While the store features a wide range of ready-to-wear suits, jackets, trousers, shoes, shirts, outerwear and accessories, it also features ‘casual space’ with a selection of relaxed clothing as well as shoes and accessories, in an area reminiscent of being “by the water”.

The store also features several convenient services, such as a made to measure department and in-store tailor for on-demand alterations, allowing customers to leave with the perfect fit.

Montreal can now boast having Canada’s largest Suitsupply location. The Toronto store, which opened in February of 2014 at 9-11 Hazelton Avenue, spans about 2,150 square feet, according to the company.

With neighbours such as Allsaints, Montblanc, Holt Renfrew and the recently opened Christofle, the new Montreal Suitsupply store further contributes to the rebirth of Rue de la Montagne. That trend will continue next year with the opening of an Expanded/combined Ogilvy-Holt Renfrew, which will be part of a luxury complex anchored by a new Four Seasons Hotel and Private Residences.

Suitsupply is growing in popularity and continuously receives positive press. It has received widespread accolades from the likes of GQ, Esquire, and, perhaps most notably, a Wall Street Journal blind test that rated a $600 Suitsupply suit in a first-place tie with a $3,600 Giorgio Armani ensemble.

Founded in Amsterdam in the year 2000, vertically integrated Suitsupply features suits with prices starting at $429, with quality and style considered to be exceptional. Suitsupply has over 70 stores globally in 22 countries, including 22 stores in the United States, with a further six locations set to open in the coming months.

*An amended, bilingual version of this article appeared last week on Montreal-Weekly.com.