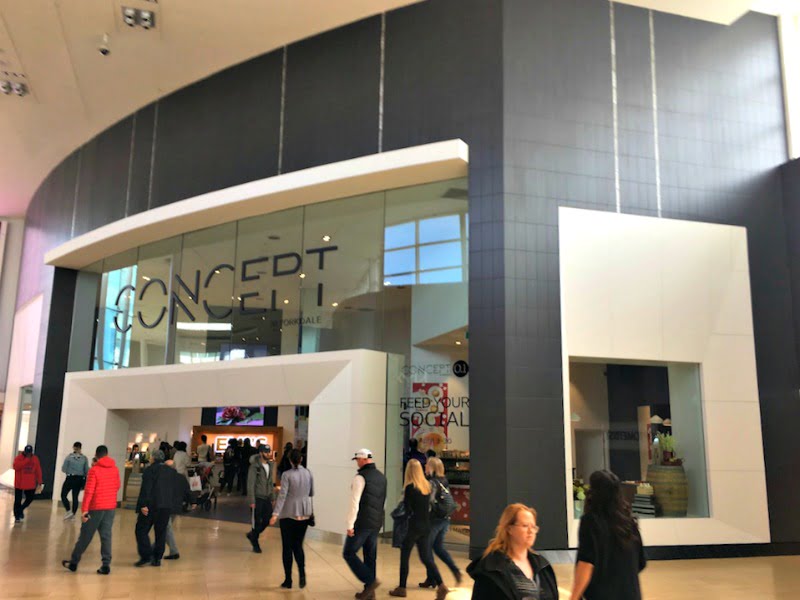 Oxford Properties has officially launched its in-mall multi-vendor rotating temporary retailer initiative, called CONCEPT, at Toronto’s Yorkdale Shopping Centre. The new space addresses the trend of integrating pop-up retail into malls, and more could follow if it proves to be successful.

CONCEPT spans about 3,600 square feet in a location near Yorkdale’s TTC subway entrance, at the south end of the mall’s recently-opened Nordstrom-anchored expansion wing. Retailers in CONCEPT will change at regular intervals, providing brands exposure to consumers in Canada’s most productive mall, without the long-term commitment that is typically required.

Toronto-based design firm figure3 designed the new space. Marjorie Mackenzie, vice president of retail at figure3, described how Oxford Properties identified an opportunity in its network of retail properties to enhance the customer experience in its malls by “bridging the gap between click and brick”. With that in mind, figure3 designed a space that facilitated maximum flexibility while allowing the space to transform quickly and easily to accommodate a variety of product offerings. “This keeps it fresh, and creates a reason for shoppers to keep coming back to see what’s new,” said Ms. Mackenzie.

CONCEPT “reflects the high quality that customers have come to expect from Oxford,” according to Ms. Mackenzie, with “an element of surprise and delight for both the customer and the vendor.”

The first six vendors to launch in CONCEPT are all food-oriented, and include the following:

Nugateau – Toronto’s first Éclair Only modern concept pastry shop, offering a variety of decadent éclairs both in sweet and savoury flavours. All of the Éclairs are handcrafted, and are regularly updated with seasonal influences as well as the freshest ingredients available.

Uncle Tetsu – The popular Japanese cheesecake and pastry retailer, which also has a location in downtown Toronto that seems to have endless lineups.

Pie Squared – The Toronto-based eatery, known for its simple U.K. style meat pies mixed in with clever new flavours, which are wrapped into a delicious pocket.

All six retailers will have a presence in CONCEPT until the end of April, when the space will be re-animated with an entirely new set of tenants. Oxford Properties hasn’t yet revealed who the next wave of tenants will be, except to say that they could range from fashion to food to technology.

Pop-up retail can be strategic for some brands. Avison Young Sales Representative Hilary Kellar-Parsons explained how pop-ups allow retailers to test the market without being bound by long-term leases and costly tenant improvements, while also providing retailers an opportunity to establish a presence in the market prior to opening their permanent store in their ideal location. Pop-ups also provide e-commerce retailers the opportunity to test concepts in a physical form, and are also useful for ‘guerrilla marketing’ initiatives, she noted.

Pop-up retail is a phenomenon that’s also here to stay, according to Linda Farha, Founder and Chief Connector of pop-up go, an online platform that helps pair retailers with available temporary retail spaces. “Pop-ups create an air of excitement and scarcity due to their temporary nature, and also allow retailers to test out new concepts and new locations prior to opening permanent stores”, she noted. Ms. Farha’s pop-up go features a curated pop-up match service that provides access to the ever-growing pipeline of pop-up seekers looking for space, indicating that temporary retail space is now more popular than ever.

In keeping with enhancing experiences at its properties, Oxford has also launched its first ‘Style Concierge’ at Yorkdale. Housed in a 450 square foot space (in the mall’s new Nordstrom wing), Style Concierge features a private change room to provide clients an exclusive experience as well as the opportunity to bring in food and drink. The space can be booked (for a reasonable fee) by customers looking for styling, as well as by stylists looking to work with clients in the new space. American Express has partnered with Yorkdale’s Style Concierge, which officially launched this week.

Yorkdale Shopping Centre recently ranked as Canada’s most productive shopping centre in Retail Council of Canada’s first annual Canadian Shopping Centre Study. Yorkdale saw average annual sales of just over $1,650 per square foot for reporting retailers, excluding anchors. Luxury retailers play a key role in the mall’s productivity, with a significant percentage of the mall’s sales being at those stores.

Yorkdale continues to expand and add new retailers. In October of 2016, the mall unveiled its 300,000 square foot Nordstrom anchored expansion wing, which includes over 20 new retailers in a dramatic space boasting natural light and soaring ceiling heights. A number of first-to-market retailers opened in the space, including Canada’s first locations for fashion brands Sandro and Maje, as well as the world’s first freestanding Canada Goose store. A number of retail spaces in the new wing still sit vacant, and several have already been spoken for. Signage is now up for a new Roots store that will open in the new wing, and several more retailers, including some that will be opening their first Canadian locations, will be revealed to be opening in the wing this spring. This year, as well, Yorkdale will open a new westward expansion wing that will be anchored by RH (Restoration Hardware) and Sporting Life.