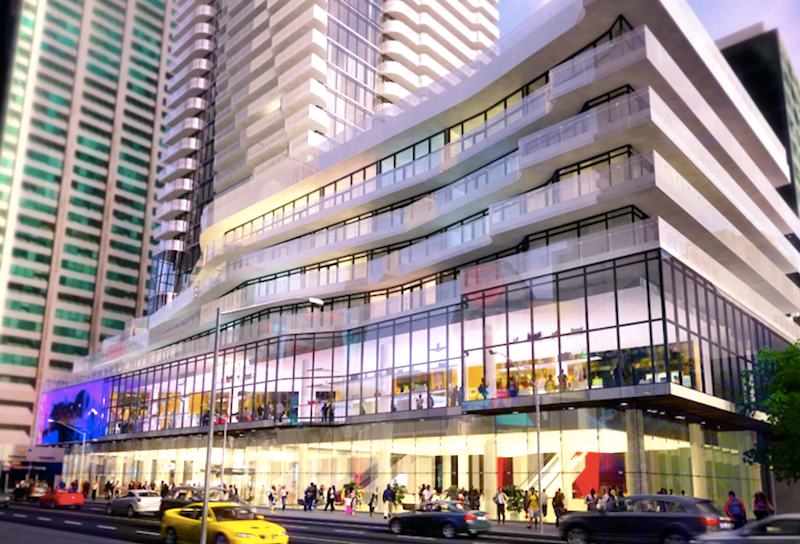 The area around Toronto’s Yonge and Bloor intersection is in the process of a substantial transformation, with a number of major projects in the works, and a number of new retailers on the way. Thousands of new residential units will eventually house upscale residents, and retailers securing space in order to serve them. The latest major announcement for the area is a Mark McEwan grocery store, which will open towards the end of 2018 in the commercial podium of One Bloor East. By the end of the decade, Toronto’s Bloor-Yorkville will arguably be home to the city’s highest concentration of grocery retailers in one geographic area.

Mark McEwan’s new Bloor Street grocery store will be the third for the McEwan Group — in the summer of 2009, McEwan opened a 21,740 square foot grocery store at CF Shops at Don Mills in Toronto, followed by a 5,500 square foot grab-and-go focused location at Toronto’s TD Centre, located in the heart of Canada’s Financial District.

Bloor-Yorkville’s McEwan will be located within the commercial podium of the new One Bloor East tower, currently under construction. McEwan will span two levels — a ground floor level with an entrance near the corner of Hayden Street and Yonge Street will measure 872 square feet, featuring access to a lower-level 17,228 square foot grocery retail space. As with McEwan’s other two locations, the new One Bloor East McEwan is expected to offer an array of gourmet food and services, catering to discerning foodies in the immediate area, as well as commuters — the Yonge-Bloor subway station is the busiest in the country.

Construction on the new McEwan grocery store is expected to begin in March of 2018, and the company anticipates the store being finished towards the end of 2018.

Two of the country’s leading brokers were involved with the deal — David Wedemire and Stan Vyriotes of DWSV Remax Ultimate Realty Inc. acted on behalf of McEwan Group in the lease deal with landlord First Capital Realty.

First Capital recently acquired the One Bloor East retail podium, which will also become home to Canada’s first Nordstrom Rack location in early 2018. Nordstrom Rack will occupy two levels, including about 8,870 square feet on the podium’s ground level at the corner of Yonge and Bloor Streets, and an upstairs level of retail space spanning about 29,675 square feet. Other tenant announcements are expected to be made as the complex is finished.

“We are thrilled to welcome a flagship 18,000 square foot McEwan’s that will occupy the entire concourse level of our newly constructed flagship retail property located at One Bloor Street East in Toronto. McEwan’s is one of the most distinct and sought-after food retailers in the Country, and their brand is consistent with our vision and our desire to offer our customers an unparalleled retail experience. McEwan’s commitment to our centre reaffirms One Bloor East as the shopping and dining destination of choice in the City”. Mr. Robins noted that McEwan is planning to open in the fourth quarter of 2018.

Mr. Robins provided insight into the area, as well as expressing confidence that the new stores will be a success. “We have no doubt that McEwan’s at One Bloor East will be embraced by a customer base which includes; the residents who live in the 789 condominium units above the Centre, the 400,000 daily transit users who access the adjacent Bloor/Yonge subway station and the employees who work in the over 8-million square feet of office space in the surrounding Bloor Street market.”

Toronto’s Yonge and Bloor Intersection, as well as areas around it, are seeing a substantial transformation. Across Yonge Street from First Capital Realty’s property is Sam Mizrahi’s THE ONE at 1 Bloor Street West, which will house a number of retailers at the commercial base of a residential tower that will soar more than a thousand feet above. A number of other condominium towers are under construction in the immediate area and when they’re finished, thousands more people will be within walking distance of the Yonge and Bloor Intersection. A number of other potential infill projects have yet to be formally announced, including the redevelopment of the block directly south of One Bloor Street East.

By 2019, the Yonge-Bloor area will arguably have the city’s highest concentration of grocery retailers — including some of its most interesting. Scheduled to open in early 2019 is ‘grocerant’ concept Eataly, which will open a three-level, 50,000 square foot location at Manulife Centre, a block west of the Yonge and Bloor Intersection. Loblaw-franchised Bloor Street Market operates a 21,000 square foot store in the basement of Manulife Centre, serving locals in a typical format. Upscale grocery retailer Pusateri’s Fine Foods operates a 5,500 square foot marble-clad location at the southwest corner of Bay Street and Yorkville Avenue, and Whole Foods operates a 50,000 square foot location at the nearby Yorkville Village shopping centre. Longo’s operates a grocery store location at the corner of Bloor Street East and Park Road at the base of the Hudson’s Bay Centre complex, and the immediate area is also home to a number of smaller 24-hour Rabba Fine Foods locations. Not to mention, American-Asian grocery chain H-Mart recently opened a small but convenient location on Yonge Street, just off the corner of Yonge and Hayden Streets.

The Yonge-Bloor area is seeing a substantial transformation as mentioned, and we’ll be doing a separate feature article in July providing an update of the area, including insights from a number of key brokers doing deals in the area.