Walmart Marks 25 Years in Canada Amid Challenges and Success [Feature] 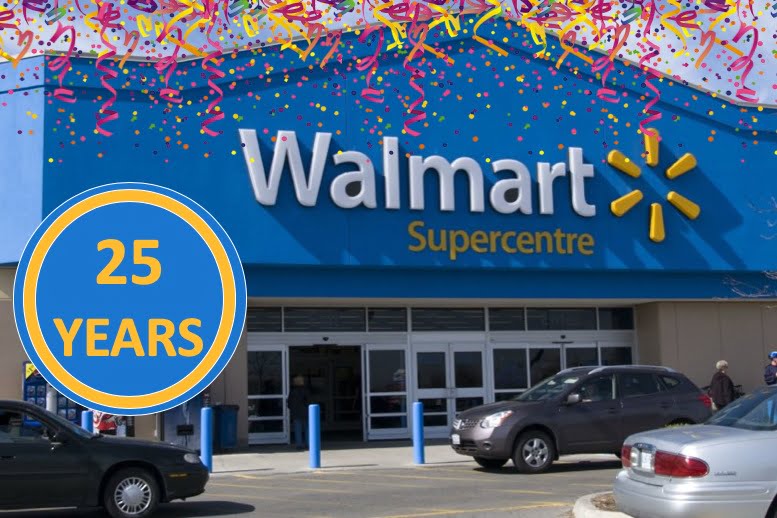 This week marks the 25th anniversary of Walmart’s entry into the Canadian market. The US-based behemoth sent shockwaves through the industry when it announced that it was opening stores in Canada after acquiring the local Woolco chain of department stores.

Walmart acquired a total of 122 stores from the Woolco chain, which was a division of Woolworth Canada, and officially founded Walmart Canada on March 17, 1994. Over the course of the year, Walmart renovated and converted the Woolco stores to the Walmart banner.

Controversy ensued when Walmart chose not to acquire 22 Woolco stores that were either unionized, or were located in downtown locations. The company was accused of being anti-union, though it retained about 16,000 former Woolco employees who were subsequently retrained and give a 5% raise. Many of the remaining Woolco locations were sold and re-opened as Zellers stores.

Woolco senior vice-president Mario Pilozzi was named CEO of Walmart Canada, and he remained there until he retired in 2008.

Other retailers in the country took notice, and some with concern — Canada had recently come out of a recession in 1994, and other long-time retailers were already struggling to maintain market share as the retail landscape continued to transform following a retail heyday in the 1980’s that saw a seemingly endless number of stores and shopping centres open their doors.

Over the next several years, Walmart Canada began relocating some of its shopping centres stores to big-box plazas, frustrating some mall landlords while enriching the big-box retail model that continues to remain popular to this day. Real estate company SmartCentres (originally called First Pro) worked with Walmart to construct many stores, and is now landlord to about 100 of Walmart’s 410 store locations in Canada. Walmart operates stores in all provinces and territories in Canada, except for Nunavut.

After some initial challenges, Walmart Canada grew its store network rapidly over its first decade in this country. By 2005, it had grown to 260 stores Canada wide, making it Canada’s second-largest retail chain at the time.

In 2005, as well, Walmart Canada announced the launch of its Supercentre concept (measuring between 67,000 square feet and 340,000 square feet), with the first three opening in southern Ontario in November of 2006. More opened in Alberta a year later and in January of 2009, the company opened its first Supercentre in Vancouver in a former Costco/Price Club location on Boundary Road (it was subsequently relocated to Burnaby).

Walmart Canada continued to grow its operations when it acquired 39 Zellers stores from Target in 2011. Target had purchased 189 leasehold locations from the Hudson’s Bay Company, with plans to penetrate the company with an initial 133 announced store locations. Target failed miserably and exited its Canadian operations in early 2015.

Walmart Canada operated Sam’s Club warehouse clubs in Ontario between 2006 and 2009, and all six were closed after the concept failed to take hold. Some attribute the failure of Sam’s Club to the strength of Costco in Canada, which has a higher penetration per-capita compared to that in the United States. Other Canadian retailers such as the Real Canadian Superstore, which offer a wide range of product, continued to improve and expand their operations in order to go head-to-head with Walmart Canada’s initiatives.

Some have accused Walmart Canada of implementing low prices to drive out local businesses. Over the course of Walmart’s success over the past 25 years, other chains including Eaton’s, Zellers, Kmart Canada have all shuttered, not to mention countless smaller retailers in communities coast-to-coast.

Prior to opening its Vancouver store 2009, Vancouver City Council voted in 2005 to reject Walmart’s attempt to open a 143,000 square foot store on Southeast Marine Drive. The proposed store would have had sustainable innovations such as power-generating windmills, under ground wells for heating and cooling, all of which would have resulted in the store consuming just 1/3 the energy of a typical Walmart store.

In September 2018, Walmart Canada began offering same-day delivery at some of its locations through a partnership with Instacart.

Walmart Canada is now one of the country’s largest employers, boasting more than 85,000 associates and serving more than 1.2-million customers across Canada daily. The company launched its e-commerce site Walmart.ca in 2011, and the website now sees more than 750,000 customers daily.

“It’s been 25 outstanding years for Walmart in Canada and we are thankful for the opportunity to serve Canadian families,” said Lee Tappenden, president and CEO, Walmart Canada. “We have built a strong history in Canada – supporting local children’s hospitals, providing disaster relief support and tackling issues like hunger and waste. We are proud to employ a diverse workforce as one of the country’s largest employers and look forward to a bright future in Canada.”

Walmart Canada continues to innovate with the introduction of full-service medical centres as well as fitness centres. This month, Walmart launched a Planet Fitness location in a store in Vaughan, Ontario, for example.

Walmart stores in the future may look different. The company proposed building ‘town centres’ in its parking lots that could include a mix of restaurants, day care establishments, health clinics, bowling alleys, food trucks, bike rental stations, fuel stations, and even amusement centres. What would result is community spaces that would act as a draw to the property also housing comprehensive Walmart stores, while also creating additional revenue for what would otherwise be a parking facility. While proposed for some areas of the United States, Walmart Canada has not yet announced similar initiatives in Canada. Given the value of land in some Canadian cities, it wouldn’t be surprising to see similar initiatives as Walmart Canada seeks to extract value from its real estate.

Walmart Canada has an extensive  philanthropy program that focuses on supporting Canadian families, with the company’s mission being to help people ‘live better’. The retailer has formed partnerships with non-profit organizations, including the Breakfast Club of Canada, Canadian Red Cross, Children’s Miracle Network, and Food Banks Canada. Some of  Walmart Canada’s philanthropy includes raising and donating $350 million for Canadian non-profit organizations, averaging about $35,000 for each day the company has operated in Canada. Walmart Canada has also donated 16 million pounds of surplus food (the equivalent of 16 million meals) to food banks and food recovery organizations across the country.

Walmart Canada is also said to be taking a leadership role in waste reduction, with plans to send zero waste to landfills by 2025. Currently, 87% of waste at Walmart Canada is diverted from landfill. As well, Walmart Canada hopes to achieve using 100% recyclable, reusable or compostable packaging for its private brand products by the year 2025. Plastic bags is another initiative — Walmart Canada plans to reduce check-out plastic bags by a further 50% by 2025, which will result in taking approximately 1-billion bags out of circulation over the period. Walmart’s delivery fleet is expected to be 100% alternatively powered by 2028.

As part of its 25th anniversary, Walmart Canada presented some ‘fun facts’ which include the following:

Congratulations, Walmart Canada, on 25 years of business in Canada!