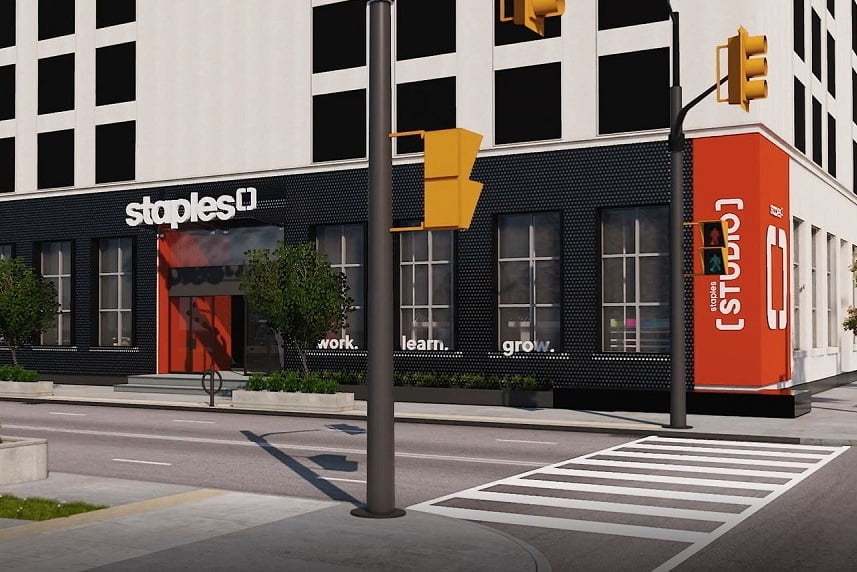 Richmond Hill-based retailer Staples Canada has launched an innovative new concept that aims to be a one-stop shop for business needs, and it chose Toronto to unveil its prototype. As part of the initiative, Staples Canada has rebranded as ‘The Working and Learning Company’ and the downtown Toronto concept is expected to be rolled-out in selected markets over the next couple of years.

David Boone, CEO of Staples Canada, said, “We’ve designed this new store with community in mind. With Staples Studio Coworking, a café, the Solution Shop and thousands of new products, this redesigned location is a working and learning hub. We want to bring people together who are focused on personal and professional growth, to be an inspiring, affordable place for entrepreneurs, businesses and students to work, meet and collaborate.”

Included is a new logo, which is a shift from signage seen in most current Staples locations. New branding is found throughout the store, as well as imbedded in customized artwork on the walls.

The Toronto store’s aim is to be experiential and comprehensive for one’s business needs. Thousands of new products are carried in the store, and customers are encouraged to interact with discovery areas to test and learn curated product solutions. Products to sample include staplers, pens, paper, home electronics and other categories — the aim is to get people ‘inspired’, according to the company. A ‘pen bar’ in the store is reminiscent of what one might see at a Muji store, which is known for its pens. A Crayola crayon area allows shoppers to choose their own colours that can be custom-boxed and purchased in sets of 24. A dedicated paper area features a range of colours and textures, and the store features a bag and luggage area with a wide range of product. A ‘journal bar’ showcases a wide range of styles. Staples, being the second-largest re-seller of small electronics in Canada, has dedicated a considerable amount of space to technology in its ‘Tech Discovery Zone’ that includes some new Google and Alexa-powered devices as well as brand-name electronics.

The store, which is located in an historic office building at the corner of Armoury Street across from the US Consulate and near City Hall, features soaring ceiling heights with a modern look and clear sight-lines. Vignettes and feature tables, located throughout the store, showcasing product solutions for different types of work environments (Retail Insider correspondent Larry Leung said it reminded him of Ikea in that respect). Customers are encouraged to interact with discovery areas to test and learn curated product solutions.

Staples Studio is available on a membership basis, and offers flexible and price-conscious options, ranging from a drop-in day pass to monthly dedicated private offices. Space can be booked online, and private offices are currently being offered at a reduced rate of $2,000 monthly, with each able to house up to four staff at once. Staples says that entrepreneurs, small businesses, start-ups and service providers can utilize the fully equipped office space which was “designed to meet the needs of the ever-growing start-up community, 24/7.”

“The way we work has changed, and we are changing with it. We’ve listened to what the business community expects from a Coworking space and we’re delivering,” said Mr. Boone.

Staples will compete with rapidly growing concepts such as WeWork — the new University Avenue Staples store features attractive and functional furniture and technology including wireless charging (i.e. not requiring a cord), standing desks (height which can be adjusted with buttons), built-in live streaming, and meeting rooms. Staples Studio also offers support from an on-site ‘Community Manager’ and other staff, not to mention the use of Spotlight  auditorium-style event space which can be booked to give lectures, for example. In order to further compete with other co-working concepts, Staples offers something that others don’t, including an in-store ‘Solution Shop’, in-house marketing, web design, and print and tech services.

The University Avenue store is currently the only location in Canada with a Studio co-working space, and the retailer plans to roll out the concept to other ‘relevant markets’ in the future. While doing a walk-through of the store on January 10, Mr. Boone explained that the co-working spaces could be rolled-out in urban areas such as downtown Toronto, as well as in suburban areas that are closer to some user’s homes.

The Spotlight auditorium space, located adjacent to the co-working area, features a free weekly speaker series that launched January 10th with Joe Mimran – he’s the founder of Joe Fresh, a former Dragon on CBC’s Dragon’s Den, and a “champion of entrepreneurs” according to Staples.

“We’ve been testing Spotlight for a few weeks now, holding networking events and workshops, and have received tremendous feedback from the creatives and entrepreneurs who have attended. We’re excited to have it open to the broader public now,” said Mr. Boone.

Staples’ innovative Toronto flagship is likely to be a hit, and we predict more locations will follow quickly as the retailer invests in its fleet of stores. The store addresses its market with a well thought out concept that will be great for consumers, and could disrupt both the retail and co-working spaces. It’s worth checking out for anyone who is in the area, and we’ll report back in a few months to see what’s working and what might be modified in the prototype — the new concept store is a rare example of true retail innovation in Canada.