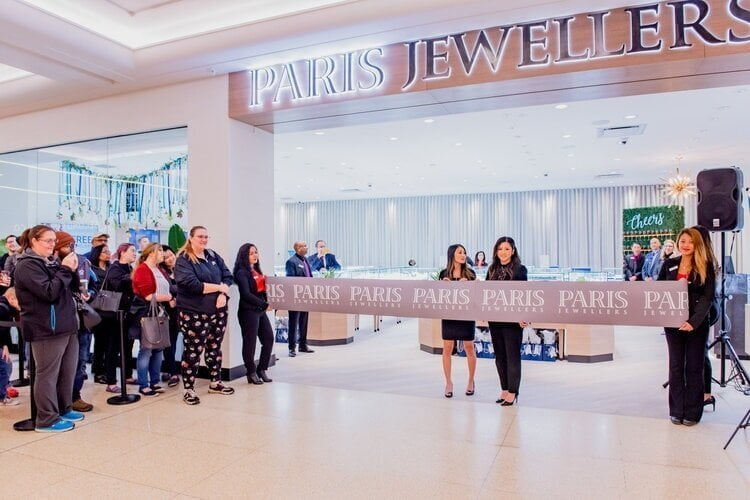 From humble beginnings with its first store in St. Albert, Alberta in 1987, Edmonton-based family-owned retailer Paris Jewellers has expanded to 26 locations in Western Canada.

Recently, it opened a new concept, flagship store at the West Edmonton Mall as well as a new store at Kelowna’s Orchard Park Shopping Centre.

“Our first store opened in St. Albert, Alberta in 1987, so to be able to have our new flagship store in our home city and in West Edmonton Mall is very special,” said Chau Lui, co-owner of Paris Jewellers. “As we began to expand our brand across Canada, our family would use the Map of Dreams; a large map that was framed on the wall and stickers were placed on wish-list cities. The Kelowna sticker has been there for over 10 years, so opening a store in that amazing community is truly a dream come true. We are excited for the new adventure and the work we are doing with our amazing community partners.”

The company is in four provinces – British Columbia, Alberta, Saskatchewan, and Ontario. Alberta has 15 stores.

“Our family immigrated from Vietnam in 1987 for a better life for our family and our family just worked odd jobs and really got the opportunity to train as goldsmiths at another jewellery store. So they would do that during the day and work their second or third jobs in the evening,” said Lui. “And then an opportunity came to open one small, 400-square-foot store in St. Albert.

“What was really interesting is at the time they were still going through English as a Second Language classes. So how they would talk to customers is they would use a Vietnamese/English dictionary to translate with customers. Can you imagine that? They would do that and customers would still have a great experience.

“So after a few years the Vietnamese/English dictionary went away and the mall in St. Albert called and said do you want to open another store and they thought one store is more than we could ever have imagined. Could we have two stores? But they took the chance and opened that other store and that’s how Paris Jewellers came to be. That was the second location and from there malls started to call and we continued to scale and grow the business.”

“In the Vietnamese community there’s a concert that’s called Paris By Night. All the famous Vietnamese singers and entertainers perform that. It’s held in Los Angeles.”

“We’ve always been in West Edmonton Mall but what we did is we’re so proud to introduce a new concept store design. It’s a brand-new concept. Brand new design. And this is our flagship store. It’s almost 2,000 square feet.”

Lui said the store has a completely different look with different colours. It has curtain drape detailing across the back of the bridal bar. Hardwood looking floors and custom plaster wall with its logo on it and different light fixtures. There’s also a nature inspired look with plants in the store. All to make it inviting for customers.

The Kelowna store is a smaller location at about 1,000 square feet and it took on some elements of the new concept.

“That will be our new concept moving forward with any expansion,” said Lui.

“We’re still planning to grow the business and open stores when the timing, location and the market is right. We always aim to make smart, strategic decisions to build a great company for our employees. For us, it’s not so much about quantity as it is being in the right market at the right time at the right location and the right property.

“We’re still family-owned and operated even though we have 26 stores in four provinces across Canada. We still really maintain this family business with close connections for our employees across Canada. And also we believe a lot in working with our communities of giving back. When we first started in St. Albert, we were relatively unknown and the community took a huge chance on us and allowed us to grow and scale our business. And really that’s why we’re here today. We’re really proud that we have great partnerships with foundations like the Children’s Wish Foundation and a portion of the proceeds from every sale from our holiday Moments Collection will be donated to the Children’s Wish Foundation. They do such incredible work granting magical wishes to children facing life threatening or terminal illness. It’s truly our sincere hope this year in assisting them in granting more wishes to deserving children.”

Paris Jewellers has also launched the limited-edition Joy Pendant (only available until November 25) where 100 per cent of the profits will be donated to Mamas for Mamas – a national charitable organization that supports mothers and caregivers in crisis by providing ongoing support to individuals and families facing various poverty-related struggles.

As well, for every pendant sold, Paris Jewellers will match it and donate a pendant to a mom in need. The pendant will be available online and in all 26 stores across Canada.

Also, from November 2 to 17, Paris Jewellers will be donating five per cent of every purchase from the Kelowna store to JoeAnna’s House. JoeAnna’s House will also be new to the Kelowna landscape and aims to provide affordable accommodation for family members with loved ones being treated at Kelowna General Hospital.

“Jewellery brings joy to people’s lives by evoking the emotions associated with special celebrations and meaningful milestones. The magic of jewellery is that it can instantly take you back to a happy moment or memory, every time you wear it,” said Lui. “Customers can choose to shop anywhere, and when they choose to celebrate their special occasions with us – it is an honour and a privilege that we cannot take for granted.”

Couche-Tard Likely to Become a Grocery Retailer in Canada and it...

Mario Toneguzzi - July 22, 2021
Couche-Tard's attempts to acquire Carrefour signals intention and with the future of gas stations in question, a broader grocery strategy is most likely at play.

Mario Toneguzzi - July 21, 2021
The rapidly growing QSR concept surpassed 150 locations with 20 more planned before the end of the year and no end in sight.

Disney Confirmed to be Closing 10 Additional Stores in Canada in August, Leaving Only 3 Prior to Full Exit

Canadian Retail News From Around The Web For July 23nd, 2021