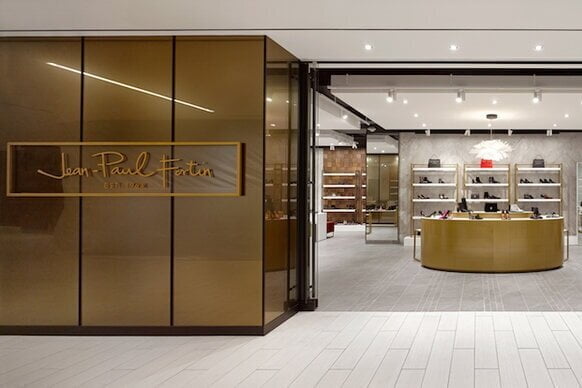 Well-known Quebec City-based multi-brand footwear retailer Jean-Paul Fortin is expanding its footprint outside the province and further into the Ontario market.

The retailer, which has its roots in the industry since 1964, operates four different banners in the market – Jean-Paul Fortin, Les Pieds sur Terre, Le Placard, and Clarks.

Francois Monat, President of Jean-Paul Fortin retail venture which is based in Quebec City, said the company is looking for opportunities in the Greater Toronto Area after the initial success it has experienced since opening a store in Toronto’s Yorkville Village a few years ago.

The retailer operates 22 stores and its online business. There are 11 Clarks stores including one at Mapleview Centre in Burlington, Ontario. There are eight branded Jean-Paul Fortin stores, two Les Pieds sur Terre and one Le Placard.

RENDERINGS OF THE JEAN-PAUL FORTIN LOCATION AT BAYVIEW VILLAGE. RENDERINGS COURTESY OF GH+A DES...
1 of 5

Prisma Construction is building out the new space, and also built the Yorkville Village store.

“It’s a very busy season because we’re renovating three of our Clarks stores in Montreal. We have a Clarks store in Fairview Pointe Claire which is going to move to a new location. The store is in construction right now. And the opening is scheduled for the end of February. We also will re-do the Clarks stores in Carrefour Laval and Galeries d’Anjou with a new concept. Those will be under construction in February for a hopefully mid-March re-opening.

“As far as growth, we’re not looking at an aggressive plan to open stores everywhere. We just wait for the right location and if the fit is good and the mall and the location in the mall is fine we go for it. For example, Bayview Village we wanted to be in that mall for the last five to eight years I think – as long as I can remember. The timing wasn’t right and then suddenly an opening happened and we jumped on it. We think we’re going to do very well there. We’re very excited about that store. We have a couple of other locations we like very much in Toronto but we’re waiting for the right opportunity.”

He said most of the Clarks stores will be renovated to the new concept by the end of 2021, 2022. The new concept is more fashion oriented.

The current ownership, under the Monat family, bought the company in 1997 from founder Paul Fortin, who had a five-store operation in Quebec City.

“We had a shoe store based in Trois Rivieres which is based between Quebec City and Montreal. Mr. Fortin was getting older and he wanted to sell his business. We showed him interest and after about a year of negotiation he decided to sell his business to us. We moved to Quebec City and our first move was actually to close down a store that wasn’t doing very well. It was a very humble start but after that we decided it was time to bring Jean-Paul Fortin to Montreal and got the opportunity at Ogilvy, so we operated the women’s shoe department at Ogilvy for almost 20 years,” said Monat.

“We were bought back by Holt Renfrew last year – a year ago in February. They bought our lease back. So we were out of there. In the meantime, between 2000 and 2015 we opened six more Fortin stores. A couple of years ago we opened our first store in Toronto which was at Yorkville Village. The store is doing very well there.”

Monat said the company does most of its product buys in Italy and Spain so many of its buys are exclusive and it doesn’t have much overlap with other stores on the market.

“We’re very unique in the types of products that we offer.”

When the Monat family, whose youngest generation is the third one in the business, acquired the Fortin brand, it made the decision to keep the Jean-Paul Fortin name as it had become synonymous with quality, exclusivity and a one-of-a-kind customer experience, says the retailer on its website.

Jeff Berkowitz of Aurora Realty Consultants negotiated the Bayview Village lease deal on behalf of Jean-Paul Fortin, and represents the brand in its expansion. QuadReal is the landlord for Bayview Village.

Mario Toneguzzi - April 18, 2021
The founder of the popular retail lifestyle concept explains how the landscape is changing and how she avoided a potentially catastrophic lease renewal prior to the start of the pandemic.

Mario Toneguzzi - April 15, 2021
The Swedish home furnishings retailer is innovating with plans for 100% zero-emission deliveries by 2025.

Canadian Retail News From Around The Web For April 19, 2021