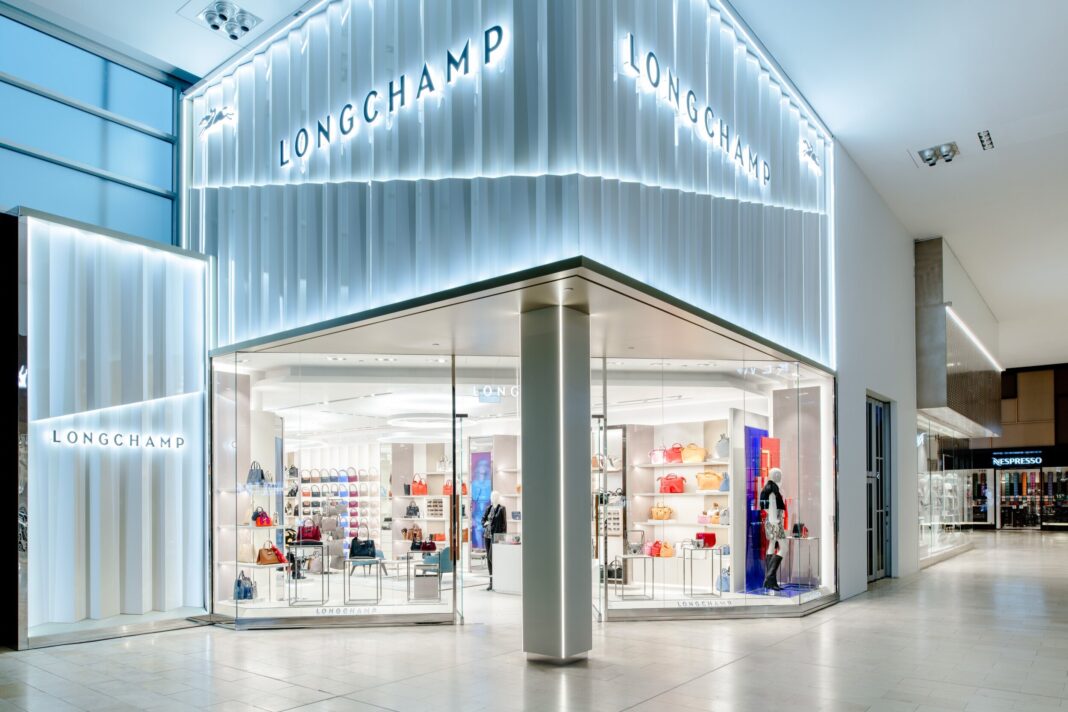 French luxury brand Longchamp has opened a beautiful new location at Toronto’s Yorkdale Shopping Centre, replacing a smaller storefront that recently shuttered nearby. Longchamp is expected to open at least one more Canadian store, according to sources, and the brand also has a robust wholesale business in retailers such as Nordstrom in Canada.

The new Yorkdale Longchamp store spans more than 1,900 square feet and is located across from the recently expanded Holt Renfrew store. It replaces the former 1,600-square-foot Longchamp location nearby that opened in 2015. The new expanded store now carries all Longchamp bag and accessory categories, including the revamped Roseau collection which features new colours and sizes. Longchamp says that the expanded Yorkdale space allows it to “tell a more concise merchandising story”.

The store’s facade was developed to look like a tridimensional curtain wall, made from faceted aluminum panels that have a pearl-like look. Fixtures in the store feature high-gloss, pearly lacquer and gloss and matte wood finished in oak, ebony and walnut. Leather accents in the store are “soft and feminine”.

The new Longchamp location is well situated between luxury brands Bulgari and Furla, with more big-names set to join as landlord Oxford Properties repositions another wing in the mall for luxury brands. Louis Vuitton will act as an anchor for the new wing in an 8,000-square-foot one-level space that will include ready-to-wear for both men and women.

Retail Insider interviewed Longchamp’s American President and CEO Stephanie Disegni in December of 2014 prior to the opening of the first Yorkdale location. She explained at the time that Longchamp had chosen Yorkdale for its first Canadian location given the strength of the mall’s luxury offerings, which has only gotten stronger as new retailers have been added to Yorkdale. One of the reasons Longchamp relocated was so that its space, along with the adjacent Ted Baker space, could be joined for the first standalone Canadian storefront for French luxury brand Celine.

At the time, Ms. Disegni said that Longchamp would look to open more standalone units in Canada. However to date the Yorkdale store is the only store in operation for the brand. A source at Nordstrom noted that when the Vancouver flagship opened in September of 2015, an expansive assortment of Longchamp bags in the store was meant to act as a key distribution point in the city. Longchamp also has an elevated presence at Nordstrom in Toronto, particularly at CF Toronto Eaton Centre where a new boutique space was recently unveiled in the store’s accessory area.

One source said that Longchamp is expected to open a store in Montreal, with details to follow. Longchamp would not confirm details of any future store openings when asked.

In the United States, Longchamp operates 14 full-priced stand-alone stores as well as two department store concessions. Longchamp also operates four outlet stores in the US as well. The brand can also be found in department stores and retailers in the US, with Nordstrom being a key account for the brand.

Longchamp was founded in 1948 in Paris and became known for its luxury leather goods. In the 1970’s, the company created a nylon and leather fabric luggage collection. The innovation resulted in light-weight luggage that crated brand recognition. Longchamp innovated again when it created its popular Le Plague handbag that is made from foldable nylon with leather trim, which can be found in stores globally and is more affordably priced than many luxury brands. The Le Pliage still remains Longchamp’s best-selling product and can be found in a range of shapes, sizes, patterns colours and fabrics.