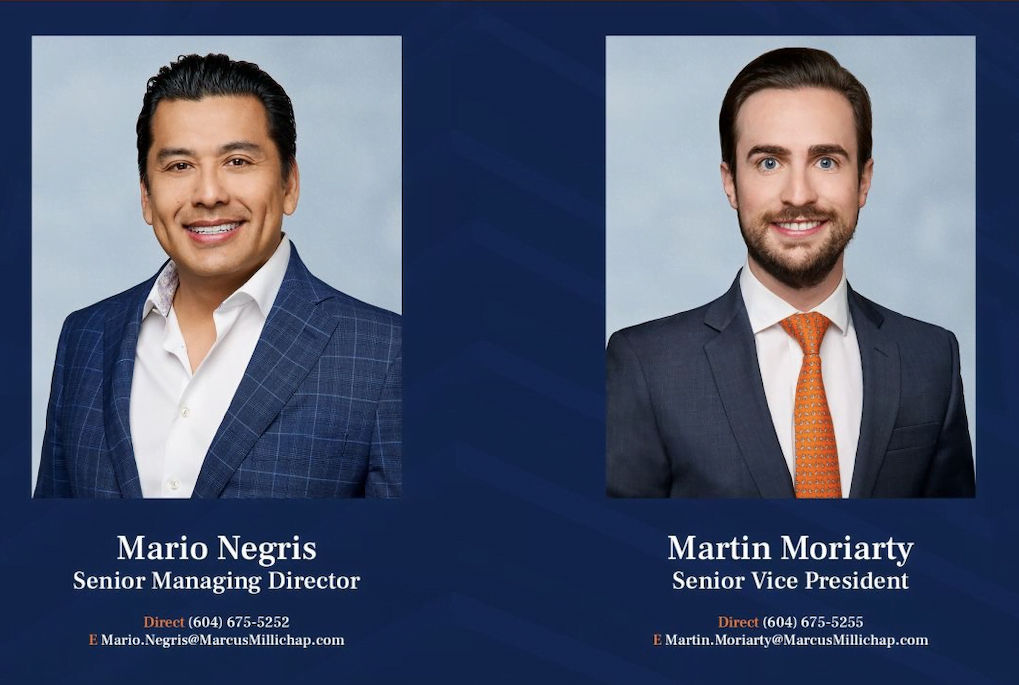 Two of Vancouver’s top retail-focused brokers, Mario Negris and Martin Moriarty, have left CBRE to spearhead an expansion at Marcus & Millichap. The duo is said to have been responsible for the vast majority of all retail lease deals over the past several years in downtown Vancouver.

Negris joins Marcus & Millichap as a Senior Managing Director and Moriarty was named as a Senior Vice President. The announcement was made officially this week. Negris had been with CBRE Vancouver for more than 20 years while Moriarty was there for about a decade.

Over the past decade, Negris and Moriarty dominated retail leasing in Vancouver by completing more than 6-million square feet in commercial real estate transactions with a total deal value exceeding $3.5 billion while with CBRE Vancouver’s Urban Properties Group. Retail deals negotiated by the duo were numerous and included brand names such as Hermes, Peloton, lululemon, Equinox Fitness, Christian Dior, Muji, Tiffany, Home Depot, Loblaw, and Old Navy, among others.

“Mario and Martin are the pre-eminent retail property leasing and investment sales team in Vancouver,” said Michael Heck, Regional Manager of Marcus & Millichap’s Vancouver office. “Through their dedicated efforts on behalf of clients, they have reached a majority retail market share in Vancouver. The addition of this team further secures our retail division’s position as the market leader in British Columbia.”

Negris holds a Bachelor of Commerce in Urban Land Economics from the University of British Columbia and is a member of the Real Estate Board of Greater Vancouver and ICSC. Moriarty earned his degree in real estate investment and finance from the University of Reading, England. Moriarty is also a serving member of the Royal Institution of Chartered Surveyors, the Greater Vancouver Real Estate Board, Canadian Real Estate Association, and ICSC.

In an interview, Martin Moriarty explained how the duo would have the opportunity to continue working on urban projects and investments while at the same time partnering strategically with teams on suburban deals under the Marcus & Millichap nameplate, and that he is looking forward to doing new deals. He also expressed his gratitude to CBRE which is considered to be one of the world’s leading commercial real estate brokerages.

Brokerages in Canada are seeing a shake-up amid increasing competition for talent. In 2018, JLL Canada expanded by acquiring brokerage Northwest Atlantic and a year later, the company grew by hiring several top brokers from competing firms as well as from noted landlords including Oxford Properties. As the COVID-19 pandemic continues, we may see more movements in the brokerage space as retailers and other businesses look to the future and sign leases for spaces. While leasing was said to be slow towards the start of the pandemic, it is picking up in regions across Canada as brands strategize multi-year growth plans.