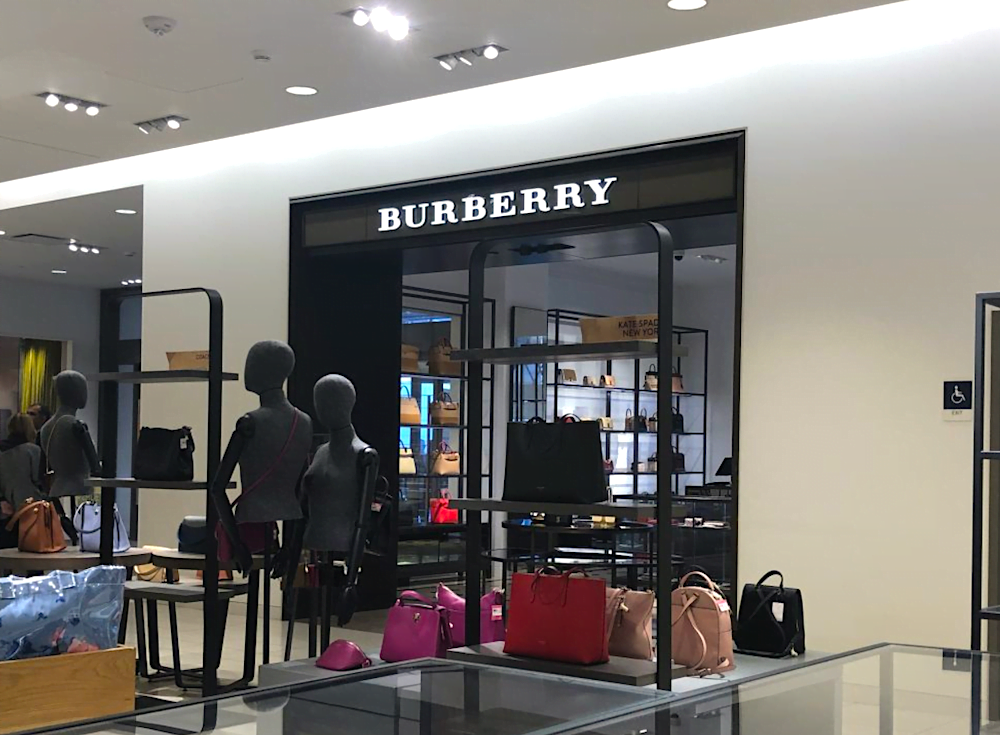 It’s part of a move for Burberry to take back its operations and create a more exclusive brand image with limited distribution in its own retail spaces, be it leased concessions or freestanding stores. As a result, Burberry’s wholesale boutique spaces at Saks Fifth Avenue and Nordstrom in Toronto are now vacated.

Until recently, Saks Fifth Avenue’s downtown Toronto store boasted a women’s Burberry boutique on its third floor — as of last week the space has been emptied of Burberry product. Main floor Burberry handbags have also been removed as the Saks store completes a minor renovation following the exit last year of brands including Louis Vuitton, Dior and Saint Laurent.

Nordstrom’s downtown Toronto and Yorkdale stores both also now have vacancies where Burberry once was. Downtown, Burberry had a boutique space for handbags on the main floor of Nordstrom CF Toronto Eaton Centre while on the third floor the brand had a women’s boutique space that is now also vacated. Burberry also vacated its boutique spaces at Toronto’s Yorkdale Shopping Centre, including a main floor bag boutique and a second-level women’s ready-to-wear boutique.

In Vancouver, Burberry converted its spaces at Nordstrom to concessions where it now operates three boutiques — that includes a main floor bag/accessory shop, a second-floor women’s boutique and a leased third-floor men’s corner. It’s now the only Nordstrom store in Canada where Burberry has an extensive offering given the concession transition.

Burberry’s exit hits Nordstorm particularly hard in the Toronto market, following the exit of other brands that once had shops within those Nordstrom stores. Nordstrom’s downtown CF Toronto Eaton Centre store has almost none of the original boutiques that it opened with in September of 2016. When it first opened, the large downtown store had main floor bag and accessory shops for Loewe, Stella McCartney and Miu Miu as well as Burberry and Gucci — now only Gucci remains and operates as a concession as per the original arrangement when Nordstrom opened. On the third floor in 2016, Nordstrom also unveiled boutique spaces for Lanvin, Loewe, Stella McCartney, Moncler, and Burberry — none of those are left now though a Max Mara boutique, which opened in 2019 and replaced Loewe, features prominently.

The Yorkdale Nordstrom store has also lost almost all of its original women’s ready-to-wear boutiques and now for the first time, a main floor handbag shop. When it opened in October of 2016, Nordstrom’s Yorkdale store had an impressive six luxury designer boutiques for women on its second level including Chloé, Celine, Valentino, Akris, Burberry and Dries Van Noten. All have since closed except for Dries Van Noten which operates out of a unique looking corner space.

The main floor of Nordstrom Yorkdale has fared better than downtown Toronto however — so far only Burberry has exited, leaving boutiques for Celine, Valentino and Chloé bags/accessories as well as a concession for Belgian luxury brand Delvaux.

It should be noted that some Nordstrom and Saks stores in Canada still carry Burberry footwear and kids fashions however — while Burberry pulled most of its Canadian wholesale accounts, two categories were excluded.

Burberry’s full range is still available at Holt Renfrew stores in Canada where the brand has a network of leased concessions. All of Holt Renfrew’s stores including in Vancouver, Calgary, Mississauga, Toronto and Montreal house Burberry concession boutiques primarily for bags and women’s ready-to-wear. Holt Renfrew’s business model of housing concessions has resulted in a station where it has far more popular luxury brands than either Saks or Nordstrom in Canada.

Burberry operates a ‘world of’ concession at Toronto’s Yorkdale Holt Renfrew store, housing a full range of women’s and men’s ready-to-wear as well as bags and accessories and some footwear. It’s the only one of its kind in Canada.

Standalone stores are also part of Burberry’s presence in Canada, with locations in downtown Vancouver at the Shangri-La Hotel facing Alberni Street, at Calgary’s CF Chinook Centre, in downtown Toronto at 144 Bloor Street West as well as at the Yorkdale Shopping Centre in Toronto.

Burberry has had its ups and downs over the years. Over-production and license agreements in the 1980s and 90s led to an over-saturation situation for the brand which almost became ubiquitous in terms of its distribution, while counterfeit items also sullied the perception of the brand known particularly for its trademark tartan and trench coats. Christopher Bailey joined Burberry as creative director in 2001 before exiting the company entirely in 2018 — during the early years under his direction the brand gained the reputation of being worn by “chavs” and football hooligans with its then lower price points.

Things were eventually turned around under new leadership and by 2016, about 77% of sales came from Burberry’s stores. Now the brand is pushing even further in terms of controlling its retail distribution through leased spaces and standalone stores ranging from boutiques to large flagships.

In 2018 it was discovered that Burberry had for the past five years been destroying unsold clothing, accessories and fragrances, creating controversy — the move was said to be to prevent items from being stolen or sold at reduced prices. Burberry no longer incinerates excess goods and also stopped using real fur in its products. This year Burberry announced that it plans to become climate positive by 2040.

Burberry was founded in 1856 by then 21-year-old Thomas Burberry and is now headquartered in London. The company has stores in major markets globally as well as concessions and, increasingly less, wholesale distribution of its products in multi-brand retailers.

Craig Patterson - November 27, 2022
The luxury fragrance brand, known to have limited distribution, has opened its third Canadian storefront in a historic building.