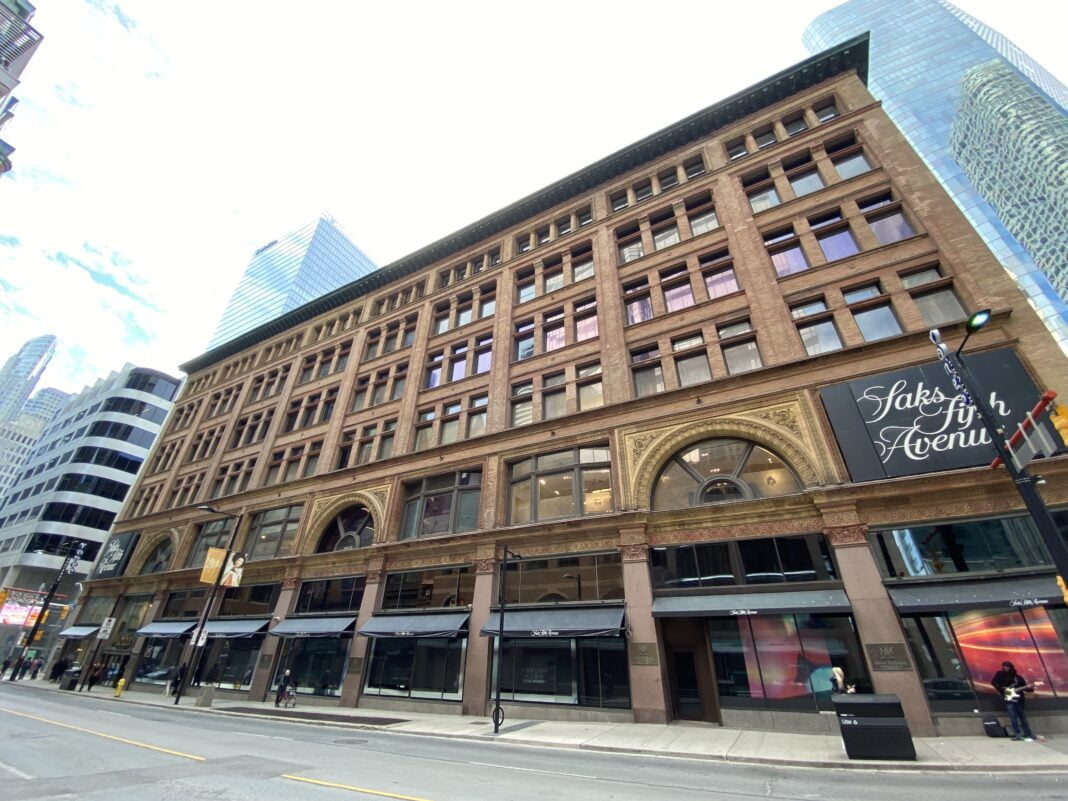 Saks Fifth Avenue has partially renovated its Canadian flagship store in downtown Toronto. Some departments have been moved around after several luxury brands exited the store earlier this year, including four concessions.

The downtown Toronto Saks Fifth Avenue store opened in February 2016. The three-floor store was made possible by carving out about 125,000 square feet of the eastern portion of the Hudson’s Bay flagship store at the southwest corner of Yonge and Queen Streets. Both stores are technically part of the CF Toronto Eaton Centre complex after Cadillac Fairview acquired the building and adjacent office tower in 2014. Toronto-based Pusateri’s Fine Foods also operates a 24,000 square foot branded ‘Saks Food Hall’ in the basement below the Saks fashion store.

When Saks opened in 2016 it housed concession boutique spaces for Louis Vuitton and Saint Laurent on the street level, as well as Dior which had a street level accessories concession and a women’s fashion boutique on the third floor. All brands shut their concessions earlier in the year and now the Saks store functions a bit differently.

The differences begin in the marble-clad Queen Street entry foyer which is shared by Hudson’s Bay and Saks. A long concierge desk was recently removed from the joint lobby area. Walking into the Saks store on the left, one enters a new street level women’s shoe department that is located where women’s handbags and accessories were until a few weeks ago. A sales associate explained that women’s shoes were moved downstairs from a former home on the second floor (branded 10022-SHOES) to be closer to handbags.

The former street-level 1,200 square foot Louis Vuitton boutique, which had a corner presence with windows facing both Yonge and Queen Street, has been converted to a sunglass and accessories shop for women. Accessories such as fur hats and scarves were formerly housed on the second level. Fur is one category that Saks still sells after competitor Holt Renfrew dropped fur from its stores, including for its concession partners, at the beginning of the year. However by the end of this year, Saks has also mandated the end of selling fur in it stores.

The former Dior bag and accessory shop on the main floor of Saks was downsized and is now branded Alexander McQueen, featuring handbags and accessories. Next to it is a new small Versace handbag shop in part of a space formerly occupied by a larger Celine handbag boutique. Space behind the smaller McQueen and Versace shops is being used for shoe storage.

The former Saint Laurent handbag concession now houses Balenciaga bags and accessories in a space that saw a minor renovation that included removing YSL’s trademark marble walls. There were rumours a few months ago that Balenciaga would exit the downtown Saks store after opening two standalone storefronts in the city.

Other main floor boutiques including Bottega Veneta, Chloe, Valentino, Birks, and Chopard remain, as is a concession for Prada bags and accessories. During the pandemic a Piaget jewellery concession was converted to a consignment model. More jewellery brands are available on the main floor near women’s shoes. The store’s street level beauty hall looks essentially the same as it did when the store opened almost seven years ago, though Aesop exited a while ago and a new Byredo counter was added.

Moving women’s shoes downstairs disrupts the original planned flow for the combined Saks/Hudson’s Bay building. When Retail Insider toured the store prior to opening in February of 2016, a representative explained how the Saks women’s shoe department on the second floor was strategically located next to Hudson’s Bay’s women’s shoe department to create proximity and facilitate cross-shopping of both stores by consumers. The same was done on the main floor with the Saks and Hudson’s Bay beauty halls being adjacent, as well as the third-floor Saks/Hudson’s Bay women’s contemporary fashion offerings being in adjacent spaces.

The former circular men’s footwear space on the second floor of Saks has been converted into an area for men’s designer fashions, with big-name brands including Balmain, Versace and Fendi. The former footwear space had been modelled on a renovation to the Michigan Avenue Saks store in Chicago, and was copied at Saks in Calgary but with a much smaller selection of brands being available. In Toronto, Saks has a surprisingly robust assortment of men’s luxury brands on its second level which spans more than 30,000 square feet.

The women’s third floor at Saks has also seen some changes, though not as drastic as on the other two levels. We reported earlier this fall that Burberry had exited its women’s fashion boutique space on the third floor of Saks after Burberry pulled its wholesale accounts in Canada to instead operate standalone stores and concessions. A Ralph Lauren women’s fashion boutique now occupies the former third floor Burberry space, with the same design and even the same light green carpet that Burberry had been using.

The former Dior women’s fashion concession on the third floor is now home to a Moncler jacket boutique for women, while a women’s Brunello Cucinelli boutique space recently opened next to it. The former Dior space is for the most part unchanged despite being branded Moncler. Most of the third floor remains relatively unchanged otherwise from prior to the pandemic with boutiques for brands including Valentino, Balenciaga, McQueen, Givenchy and Dolce & Gabbana. Some shoppers may scratch their heads when they see signage near the escalators on the third floor announcing ‘Barneys at Saks’ — while the signage was added during the pandemic, only two brands occupy the area which feels nothing like the Barneys at Saks which takes up an entire floor at the Saks flagship in Manhattan.

In 2021, a Saint Laurent women’s ready-to-wear boutique space shut on the third floor and was replaced by Balmain. A fur salon also recently shut ahead of Saks removing fur from its stores entirely.

Other changes to the Toronto Saks store include reduced hours — several months ago Saks reduced its hours to the current 11:00am to 6:00pm daily. The adjacent Hudson’s Bay store is still open from 10:00am to 9:00pm daily other than Sundays, creating a somewhat awkward situation for shoppers looking to visit both stores in the evening hours or before 11:00am.

Several weeks ago a security guard was positioned near a second-level pedway from CF Toronto Eaton Centre into Saks, and now bronze metal gates block off the Saks store when it shuts at 6:00pm daily. Several weeks ago, as well, three plexiglass security gates were installed in the second-level lobby area shared by Saks and Hudson’s Bay that leads into the pedway to CF Toronto Eaton Centre, as per the photo below.

Saks Fifth Avenue also operates two other full-priced standalone stores in Canada, in Toronto and Calgary. The second Toronto Saks location opened in March of 2016 at CF Sherway Gardens in Toronto, also containing a Pusateri’s-operated Saks-branded grocery store. A menswear department adjacent to Pusateri’s at Sherway has since been relocated upstairs after the store was downsized.

In Calgary, Saks Fifth Avenue operates a 115,000 square foot store at CF Chinook Centre which opened in February of 2018. The store lacks a grocery component. Last month Retail Insider had an opportunity to visit the Calgary Saks store which was surprisingly lacking in product in its men’s and women’s fashion departments.

Saks was supposed to open about 10 luxury stores in Canada but subsequently halted the expansion. Plans had included a 200,000 square foot Saks store that was supposed to open within the Hudson’s Bay building in downtown Montreal in the fall of 2018, as well as at least one Saks Fifth Avenue store in the Vancouver market. Plans for the Montreal store were shelved in 2018.

In the United States, Saks Fifth Avenue has found success in some markets while it has struggled in others. As a result, many Saks stores have opened and closed in the United States since the 1990s. Most recently, a location in downtown Cincinnati was announced to be closing by the end of this year. The most recent opening was a 113,000 square foot Saks store at American Dream in New Jersey and in Beverly Hills, CA, Saks will relocate into a former 125,000 square foot Barneys location on Wilshire Boulevard. Saks Fifth Avenue currently operates three stores in Canada and 39 in the US, as well as two partner stores in Bahrain and Kazakhstan. Saks Fifth Avenue was founded in New York City in 1867 and continues to operate a 650,000 square foot flagship store on Fifth Avenue which is said to be responsible for more than 20% of the company’s sales.

Vancouver, Calgary, and Montreal are the only other cities in Canada with large luxury stores — Calgary has two (Holts and Saks) and Vancouver and Montreal are both home to one large Holt Renfrew store. Vancouver’s Nordstrom store is also seeing success with its expansive offering of luxury brands, including several branded shop-in-stores. Nordstrom’s other Canadian stores are not faring nearly as well. In Toronto, almost all of the luxury brands that opened in the CF Toronto Eaton Centre Nordstrom store in 2016 are no longer there, and five of the six original women’s luxury brand shop-in-stores at Nordstrom Yorkdale have shut since it opened in 2016. Nordstrom also operates smaller luxury-light stores in Calgary, Ottawa and at Toronto’s CF Sherway Gardens.

The competition is particularly fierce in Toronto, which has become the centre of luxury retail in Canada with an ever-growing number of standalone luxury stores. Toronto’s Yorkdale Shopping Centre is leading the way with new luxury stores opening regularly. Toronto’s Bloor-Yorkville is also seeing interest from luxury brands, with more large flagship stores said to be on the way. CF Toronto Eaton Centre has struggled in terms of seeing the same luxury shopping dollars. It lacks valet parking, including at Saks where plans to have valet parking were dashed when the city mandated a bike lane on Richmond Street.

Vagrancy and cleanliness are among the challenges in the area surrounding CF Toronto Eaton Centre, turning off some of the city’s wealthy. The area is still very popular with the millions of people who come down to shop and be entertained, though Rosedale matrons are more likely to venture to nearby Yorkville, or to Yorkdale which offers top brands in a climate-controlled environment.

Interview with Sam Mizrahi, Builder of ‘The One’ Tower at Bloor...