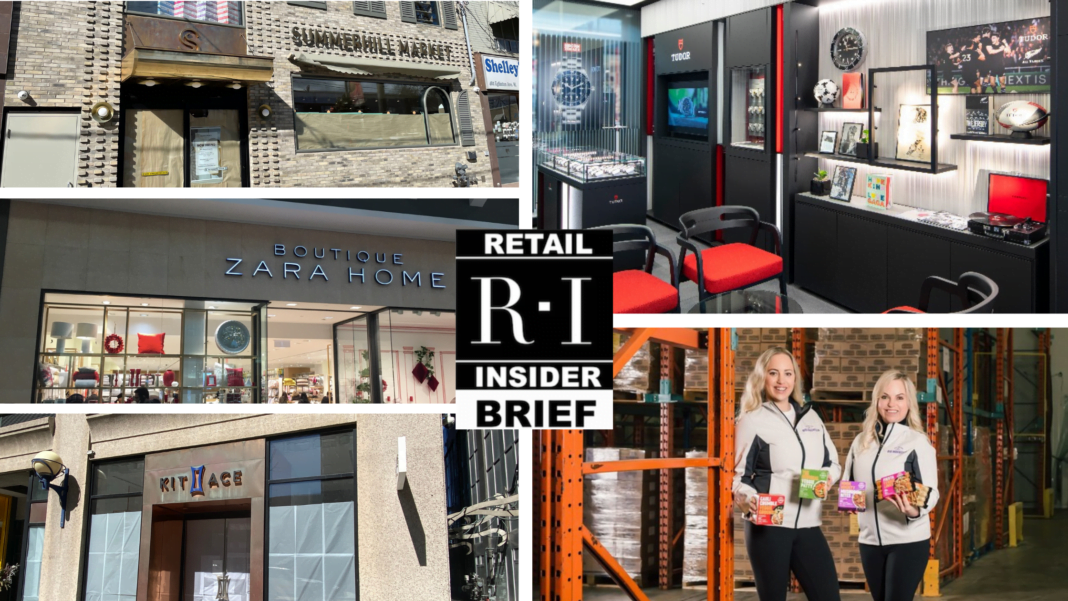 Swiss Luxury watch brand TUDOR has opened its first storefront in North America at Toronto’s Yorkdale Shopping Centre. The 450-square-foot space is a partner boutique connected to the mall’s Raffi Jewellers store which also features several other branded spaces. The boutique technically opened on November 19, 2020 and had to shut three days later due to pandemic lockdowns.

The TUDOR space features red, black, and grey colour hues combined with a mixture of high-quality finishes. The store includes a range of classic, sport, diving, and heritage inspired watches, including the newly-released TUDOR Royal line which is described as having a sport-chic range of watches with integrated bracelet, signature-notched bezel, and automatic movement.

The Yorkdale store faces directly onto the mall towards another luxury brand store, Breitling, which opened its first Canadian storefront in partnership with jeweller European Boutique in the summer of 2017.

TUDOR was founded in Geneva, Switzerland, in 1926 by Hans Wilsdorf, the founder of Rolex. Tudor continues to be the ‘sister’ company to Rolex with both companies being owned by the Hans Wilsdorf Foundation. The watches, which from afar could be mistaken for Rolex, are generally priced in the $3,000-$7,000 range depending on the style.

Raffi Jewellers, which is the licensee for the new TUDOR boutique, operates storefronts at Yorkdale as well as at Square One in Mississauga. The Yorkdale store spans nearly 4,400 square feet. Tudor replaces a Jaeger-LeCoultre boutique that relocated down the hall into a standalone space that is now corporately owned.

Yorkdale is home to the biggest clustering of luxury brands in Canada, and sources say that more announcements are on the way for this year as well as into 2021.

We reported last month that Montreal-based jeweller Birks had partnered with Tudor for online sales.

Spanish fashion brand Zara is closing its home division, Zara Home. By next month the brand’s last Canadian store — located near Montreal — will shut. Zara Home operated two storefronts in Canada for several years but the brand never expanded as broadly as had been anticipated.

The Zara Home store at CF Carrefour Laval is set to close on April 15, according to Retail Insider Montreal correspondent, Maxime Frechette. The 4,200-square-foot Zara Home store occupies a prominent location in the suburban Montreal mall near a Hudson’s Bay anchor store and across from Sephora and Aritzia.

A 4,500-square-foot Zara Home store at Toronto’s Yorkdale Shopping Centre shut permanently last year, and its space is set to be integrated into a new Nike flagship store that will be opening in the mall this year. The Yorkdale Zara Home store was the first in North America when it opened on August 22, 2013.

Vancouver-based fashion retailer Kit and Ace has shut its store at 102 Bloor Street West in Toronto. The store opened in 2015 and replaced a Benetton store that had operated there for years.

The full space spans 4,520 square feet on one level and includes a coffee component facing onto Critchley Lane called ‘Sorry Coffee’ which remains open for now. The coffee bar is also expected to shut and the space is now being offered for lease by Stan Vyriotes and David Wedemire of DSWV Realty. More information on the space can be found here.

Kit and Ace went on an expansion tear in 2015 and opened pop-up stores in markets across Canada. The brand was founded in 2014 by the Wilson family, including lululemon Founder, Chip Wilson, and his wife, Shannon, and son, J.J. The brand struggled financially and in 2017 all international stores were closed. In December of 2018 we reported that Kit and Ace CEO, George Tsogas, had purchased the company from Wilson’s Hold It All Inc. and that the brand was being repositioned from a ‘technical cashmere’ brand to a ‘modern commuter’ brand. With that, fashions targeting urban cyclists were added to stores.

Kit and Ace continues to operate six standalone stores in Canada. That includes two in the Vancouver area (165 Water Street in Vancouver and at Park Royal in West Vancouver), one at 171 Lakeshore Road E. in Oakville, ON, one in Mount Royal Village in Calgary, and, during the pandemic, Kit and Ace opened a store in a unique heritage building at 10324 Whyte Avenue in Edmonton.

The fourth and largest location to date, Forest Hill’s Summerhill Market sits at 7,200 square feet and spans two floors. The space was previously a restaurant and has been extensively renovated to accommodate the boutique grocerant and its extensive product line up.

With two floors to work with, Summerhill dedicated the main floor to fresh produce, dairy and dairy alternatives, and grab-and-go meals. The second level provides customers with the retailer’s popular heat-and-eat items, a butcher, a deli and cheese counter, and various frozen food and pantry staples. Also, unique to this location and largely due to the local demographic, Summerhill Market Eglinton offers an extensive selection of kosher goods.

Retail Insider reported on Summerhill’s recent partnership with Chef Ted Corrado, who will be overseeing the market’s line of 800-plus house-made items. In addition to adding more restaurant-quality dishes and finessing Summerhill’s established recipes, Corrado is adding frozen and prepared foods from some of his industry peers, including dim sum from Patois chef Craig Wong.

Retail Insider has reported on Summerhill Market’s rapid expansion in the past. In December of 2019, we reported on the opening of Summerhill’s Annex location. In that article, we revealed that the Eglinton store would be opening shortly thereafter, with no way of knowing what kind of year 2020 would be. Now in the spring of 2021, we are pleased to watch Summerhill Market’s continued growth with it’s newest store.

The pop up will showcase three style collaborations with local design influencers and will also highlight unique work from seven unique artists. Pieces range from glasswork to paper art to pottery.

The #ShopYourCircle pop up is taking place from March 31 to April 12, 2021. Supporting local retail is important to the future of the Canadian economy, as was laid out in a recent feature in Retail Insider.

Mother-daughter-owned-and-operated Big Mountain Foods has announced its expansion into a 70,000-square-foot facility. The space will provide the company with the tools and international reach to make their plant-based foods more accessible than ever. Big Mountain Foods is also aiming to operate a zero-waste facility by 2025.

The natural vegan food manufacturer, owned and operated by Kimberly and Jasmine Chamberland, recently partnered with grocer giant, Kroger, to help facilitate the move into the sprawling new facility.

“I am so proud of the expansion Big Mountain Foods has undergone to get to this point and we are ready to move forward into a larger facility with the top talent in place to execute our product outreach strategy across the USA, Canada, and Asia over the next five years,” says Kimberly Chamberland, CEO of Big Mountain Foods and Orange County, California native.

“With new brands entering the plant-based space, we’re ready to expand our capacity and execute our vision to be the leader in clean eating while continuing to innovate allergen-free, clean-label products with ingredients our customers know and love,” says Jasmine Chamberland, President of Big Mountain Foods.

Founded in 1987, Big Mountain Foods has been a supermarket mainstay for years due to the quality of its plant-based products. The manufacturer also prides itself on being entirely female-owned and having a 90% female workforce.

Canadian Retail News From Around The Web For December 6th, 2022

Canadian Retail News From Around The Web For December 5th, 2022