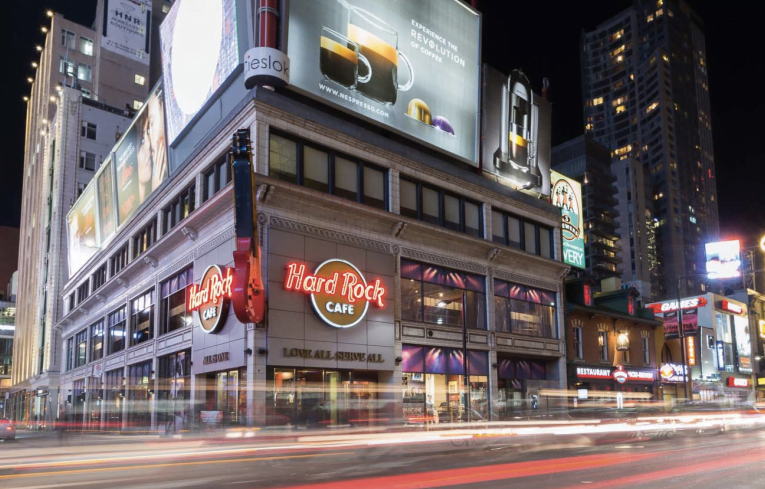 The iconic Hard Rock Cafe at 279 Yonge Street in downtown Toronto has been leased to Shoppers Drug Mart, according to sources. It’s the first time in over 35 years that the retail space has been available for lease.

The 22,000 square foot multi-level retail space has considerable exposure on busy Yonge-Dundas Square, which many consider to be Toronto’s answer to New York City’s Times Square. According to CBRE marketing materials, the site offers exposure to over 60 million potential customers, annually.

Hard Rock’s lease on the 22,000 square foot property expires in June of 2017. The asking rent for the space was $2 million annually — about twice what Hard Rock Cafe was paying, according to a source. The space includes a ground floor of 7,503 square feet, a second floor of 7,126 square feet, and a lower floor of 7,373 square feet. There is also a third floor office space within the building. The site includes a frontage of about 60 feet along Yonge Street, as well as more than 125 feet facing onto Dundas Square, which is animated with various activities throughout the year.

A source says that the landlord wished to lease the space to one large tenant, hence why it chose Shoppers Drug Mart rather than divide the space for multiple smaller tenants. Hard Rock Cafe is said to be looking for a new space in Toronto’s core, which has been met with some challenges.

It’s unclear if Shoppers Drug Mart will occupy the entire three floors of retail space, though given its prominent location, the retailer is likely to do something grand. The company is about to launch a new beauty concept that is expected to be part of the new store announcement. Shoppers Drug Mart also operates several stores in the immediate area, including one across Dundas Square at 10 Dundas Street East, as well as a store at the busy CF Toronto Eaton Centre.

The Yonge-Dundas intersection is the busiest pedestrian area in Canada, and is anchored by North America’s busiest shopping mall — the CF Toronto Eaton Centre, which sees an estimated 50 million annual visitors. New arrivals to the area include a 220,000 square foot Nordstrom flagship, Uniqlo’s first Canadian store, Saks Fifth Avenue’s Canadian flagship, and an expanded H&M flagship that is the chain’s top unit in the country. More announcements will be made for the area, as two major sporting goods brands are set to announce flagships nearby.