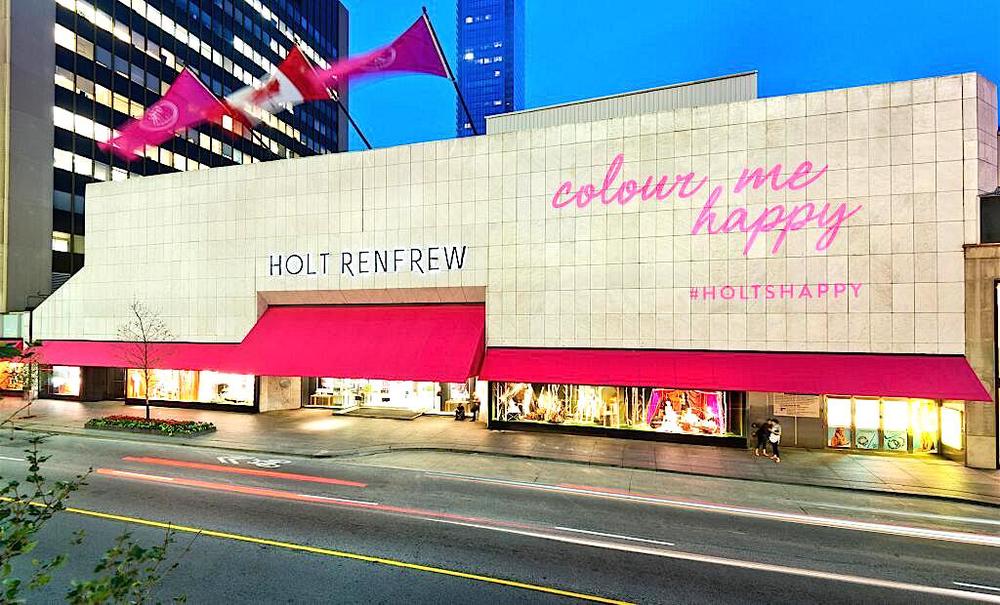 Holt Renfrew has announced that it will close its small Ottawa and Quebec City locations early next year, and we think that more Holt Renfrew store closures could follow. The company will instead concentrate on operating larger locations in just five Canadian cities. This strategy could be in response to expected competition from Saks Fifth Avenue and Nordstrom, both opening Canadian locations over the next several years. It appears that Holt Renfrew’s strategy is to build stores in excess of 100,000 square feet, calling into the question the future of two Holt Renfrew locations not discussed in other media sources.

Holt Renfrew locations to close at the end of January, 2015:

Holt Renfrew’s 36,000 square foot Ottawa store is located within the CD Howe Building at 240 Sparks Street. The underperforming two-level location lacks many of the typical designers and concessions featured in other Holt Renfrew locations, most notably a Louis Vuitton shop. The store is about a kilometre from bustling Rideau Centre, a downtown mall which is seeing substantial renovations, as well as the addition of three new upscale anchors to be discussed below.

We already know that Holt Renfrew’s current 84,000 square foot Montreal store, at 1300 Sherbrooke Street West, will close in 2017. It will be replaced with a merged Ogilvy/Holt Renfrew store, measuring about 220,000 square feet. With the closure of its Sherbrooke Street store, only two of the company’s remaining locations will measure less than 120,000 square feet. The lease on its 47,000 square foot downtown Edmonton store, located at Manulife Place, is set to expire in 2017. Sources say that Holt Renfrew may not renew this lease, and may instead choose to open a substantially larger replacement location in a suburban shopping centre.

Holt Renfrew will see substantial competition from several large retailers, which are either building new stores or expanding their existing locations. As a result, Holt Renfrew appears to be concentrating on expanding and improving its top-performing locations, spending in excess of $300 million to increase its store square footage from about 800,000 to over 1.2 million square feet. We’ll briefly discuss how Saks Fifth Avenue, Nordstrom, La Maison Simons and Harry Rosen are all putting pressure on Holt Renfrew’s bottom line.

Saks Fifth Avenue: Holt Renfrew’s announced store closures may be partly in response to Saks Fifth Avenue’s plans to open as many as seven Canadian stores over the next several years. Saks has already announced two Canadian locations – a 150,000 square foot store occupying part of Toronto’s 850,000 square foot Hudson’s Bay flagship, and a 130,000 square foot location to occupy part of a former Sears store at Toronto’s Sherway Gardens. Sources confirm that Saks is looking to open similarly sized stores in Vancouver and Montreal, as well as possibly in Calgary and Edmonton.

Nordstrom: The upscale Seattle-based retailer also plans to open as many as seven Canadian stores, including its first Canadian location next month at Calgary’s Chinook Centre. Although less upscale than Holt Renfrew, Nordstrom’s exceptional customer service may pull some clients away from Holt’s. Nordstrom will also carry an assortment of top-priced designers which are also carried at Holt Renfrew, though it also carries more moderately priced items in various product categories. Nordstrom will eventually operate stores in Vancouver, Calgary, Toronto and Ottawa, and sources confirm that the retailer is also interested in opening an Edmonton location.

Harry Rosen: Upscale menswear retailer Harry Rosen is expanding and renovating its store base, adding new designers as well as an expanded assortment of footwear and accessories. Harry Rosen’s customer service is exceptional, and it spends more on staff training than any Canadian retailer. Harry Rosen has considerable brand loyalty and appears keen to maintain its status as Canada’s premier menswear retailer.

Why will Holt Renfrew close its Ottawa and Quebec City stores?

Ottawa: Despite Ottawa’s large population and high average income, the conservative city has a limited number of consumers who buy luxury goods. Holt Renfrew’s tiny and dated Ottawa store, distanced from busy Rideau Centre, would have seen considerable competition from Rideau Centre’s 157,000 square foot Nordstrom store, set to open in the spring of next year. Additionally, in August of 2016, a 105,000 square foot La Maison Simons will open in the same mall. Both Nordstrom and La Maison Simons will carry a selection of pricey designer labels. Furthermore, in November of this year, Harry Rosen will open an 18,000 square foot flagship at Rideau Centre, replacing a store about half the size. Interestingly, several years ago we were told that Holt Renfrew was in talks to occupy part of the space to be occupied by Nordstrom in Rideau Centre’s former Eaton’s/Sears retail space. It appears that instead of trying to compete with Rideau’s upscale new anchors, Holt Renfrew has chosen to exit a city which lacks upscale designers such as Chanel and Louis Vuitton, present in similarly sized cities such as Calgary.

Quebec City: Quebec City has a limited number of luxury shoppers, due to its relatively small population, modest incomes, and high taxes. La Maison Simons’ flagship store is located in the same mall as Holt Renfrew. Simons’ 100,000 square foot store carries considerably more designer ready-to-wear items than the mall’s Holt Renfrew, though Holt Renfrew beats Simons for designer accessories, footwear and cosmetics. With the closure of Holt’s, affluent Quebec City shoppers will be underserved in these categories. As far as we’re aware, Harry Rosen has no plans for a Quebec City location, possibly further speaking to the city’s modest demand for luxury goods.

Holt Renfrew will renovate and expand its top-performing locations, as well as build a free-standing men’s store in Toronto. Here’s a rundown of what is planned:

Vancouver: We’re told that Holt’s Pacific Centre store, the chain’s top-performer, will be expanded by annexing two adjacent sports retailers. This will grow the current 140,000 square foot unit by as much as 40,000 square feet. Vancouver’s Holt’s will be at least partly renovated to include a restaurant as well as expanded footwear and leather goods departments. It will also update its personal shopping areas, the most productive real estate in the store, as well as add a by-invitation-only luxury shopping ‘Apartment’ for its top clients. The Vancouver store, which replaced a 68,000 square foot location in 2007, has seen sales more than double in the past seven years, according to sources.

Calgary: Holt Renfrew’s Calgary store, located downtown in The Core shopping centre, will also see an expansion and renovation. The 147,000 square foot store features an unused 25,500 square foot fourth floor, which may be opened up as part of its announced expansion. Calgary’s Holt’s will also see a new restaurant as well as expanded footwear and leather goods departments, as well as enhanced personal shopping suites and the addition of a luxury shopping ‘Apartment’ similar to its Vancouver store. Calgary’s current Holt Renfrew opened in the fall of 2009, replacing a 43,000 square foot unit that reportedly had the highest sales per square foot in the chain.

Toronto – 50 Bloor Street West: The chain’s flagship (currently measuring in excess of 180,000 square feet) will be expanded and fully renovated, including the addition of a new facade to replace its current banal, aging marble frontage. According to Holt’s, a luxury shopping Apartment will be added to the store, as well as significant enhancements to its beauty, accessories, and footwear areas.

Toronto – 100 Bloor Street West: This fall, Holt’s will open a free-standing, 14,000 square foot men’s store to compliment its 50 Bloor St. flagship. Interestingly, menswear will continue to be carried at the 50 Bloor St. flagship as well. We’re awaiting further details on the company’s new menswear concept, which will have branding separate from Holt’s main stores.

Montreal: In 2017, Montreal’s current 84,000 square foot Holt Renfrew store will close, to be replaced with a combined Ogilvy/Holt Renfrew location. To be named Ogilvy, part of the Holt Renfrew & Co. collection, the 220,000 square foot location could become the grandest in the chain, depending on how large its Toronto flagship is expanded.

Despite the length of this article, we’ve got more to say on the topic. Next week we’ll discuss Holt Renfrew further, including the future of its current Edmonton store.