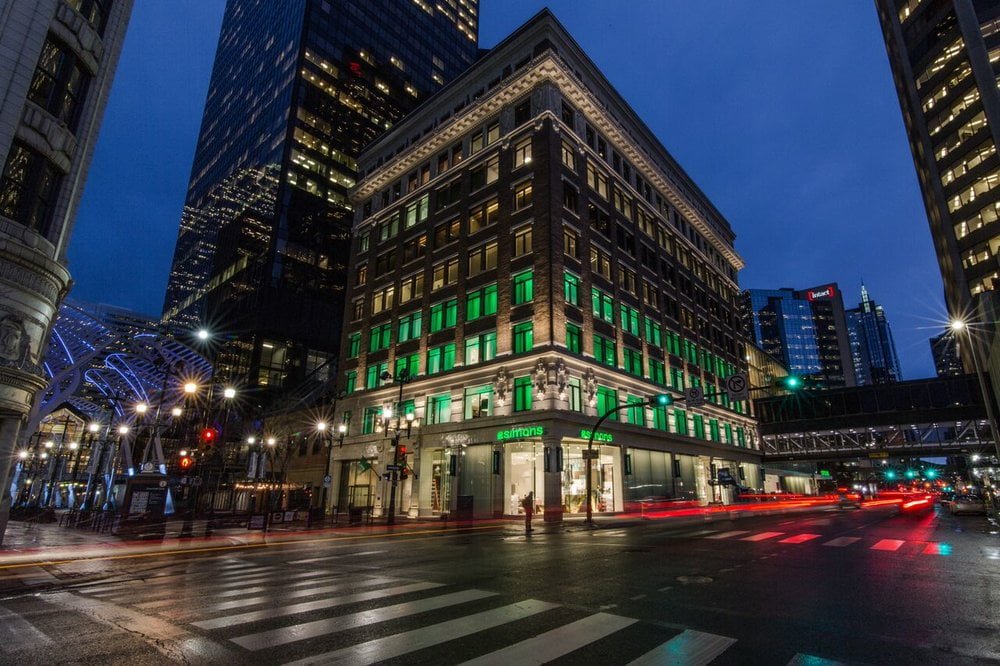 The 96,000 square foot store occupies five floors of the nine-level Lancaster Building (built in 1919), as well as three levels of the adjacent The CORE shopping complex. The main floor of Simons runs an entire city block on 2 Street SW between Stephen Avenue and 7 Avenue SW. Local design firm McKinley Burkart led Simons’ architectural and design plans, with a vision to integrate the two buildings.

Art plays an important role in the new Calgary location. Simons commissioned local Calgary artist Maya Gohill to install a three-storey painted mural which runs along the escalators in the Lancaster Building, as per the photos below. Several other Calgary artists are also represented in the store, including a large graphic mural by Megan Jentsc, and a portrait (called ‘Poet #2) by internationally recognized artist Chris Cran.

When entering the store from street-level, “a ribbon-like curved floor-to-ceiling windowscape,” creates “visual continuity around both buildings”, according to Simons. The photo below is by Ryan Massel.

The store also features the 40-seat Ève café, with a menu of hot and cold, sweet and savoury treats. The café acts as a transition area between women’s departments on levels one and two, and men’s on levels three and four.

The upper level windows of the Lancaster Building are lined with softly lit green drapery (as per the top photo), creating a glowing exterior façade and a dramatic skylight illuminates the asymmetrical multi-floor opening visible from all levels. A set of walnut stairs connects all five floors from Customer Service on the lower level up to men’s departments on the fourth floor. The staircase features a frame of blackened steel chevron rails that creates a dramatic focal point in the store.

The Calgary store is Simons’ 14th location in Canada, and is the second for the province — Simons’ first Alberta store opened in October of 2012 at West Edmonton Mall, and a second Edmonton store will open on August 24 of this year at Londonderry Shopping Centre.