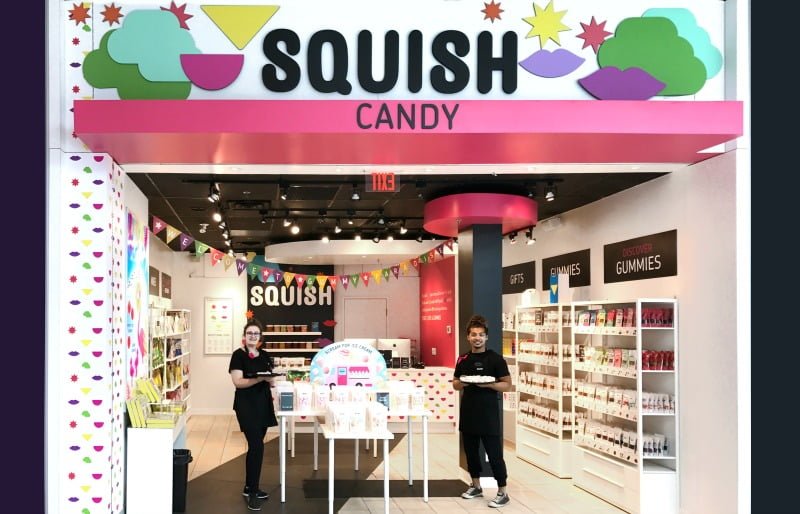 Sarah Segal, the company’s chief executive officer, told Retail Insider that it will be opening two more stores in the Toronto area (Square One in Mississauga and CF Sherway Gardens in Toronto) before the end of this month and one in St. Bruno, Que., bringing its total store count to 14.

And it has plans to expand across Canada to about 30 stores in the next two to three years as well as exploring moving into the U.S. market.

“We’re a gummy specialist company. We’re extremely creative and we try to have the widest assortment of innovative and fun gummy gifts and unique flavours. We’re really playing in that gifting market,” says Segal.

“We want to have an original twist on our packaging. We have a lot of fun with it. Trying to break the traditional mold of gifting and trying to get it to reflect our not-so-serious approach to gifting. We do that with our concepts, with our candy shapes, with our names. It’s really a very creative experience because we really respond to our customers.”

The first store opened in 2014 in Montreal. Currently, there are six stores in Quebec, four in Ontario and one in Vancouver (at Hudson’s Bay). The first venture outside of Quebec was in Toronto in 2015.

“As part of our expansion, we’re really trying to fill out Canada. We’ve done very well in suburban markets as well as downtown. So we see a real reception in all kinds of areas. A wide variety,” says Segal.

“There’s a lot of potential in Vancouver and in the whole Western area. That’s exciting. And also the East. We’ve got a ton of interest from the Maritimes.”

The Scarborough store was a new approach with a co-tenancy with two other stores but this Squish is re-locating to its own space.

“We’re doing a similar concept in Square One where we have co-tenancy (with two other stores). We’re really excited because it really shows the flexibility of our concept,” says Segal.

“We’re trying to move away from a traditional retail approach of here’s our 600-square-foot location and we need big space. We do fantastic numbers at about 250 square feet and also at 1,200. I find that’s the most exciting, especially in this retail landscape to have that flexibility with our concept. We’re very responsive. We try to maximize the opportunity with where we see the traffic with our customers. We want to be there.”

Segal says Squish also has an “incredible” vegan product which has helped the store stand out in the market.