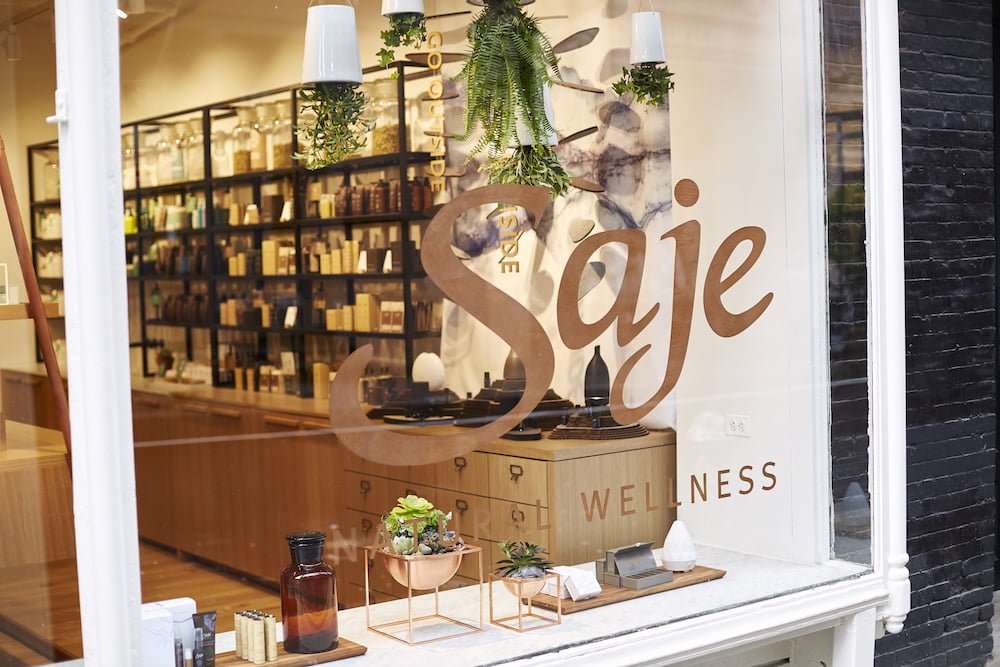 Vancouver-based Saje Natural Wellness is marking 25 years in business, as well as the opening of its 50th store location. The company continues to see rapid growth both in Canada and abroad, after launching an expansion into the United States last year.

Its expansion didn’t really start to take off until relatively recently. When we first reported on Saje Natural Wellness in September of 2014, it had just 14 locations in Canada. The company has grown quickly — the summer 2017 opening of a West Edmonton Mall store marks its 50th in Canada, as well as its second within North America’s largest shopping centre. While 50 was the initial target number of stores anticipated for the Canadian market, the number is now higher, and based on opportunity.

In fact, Saje has grown its bricks & mortar store count by more than 316% in the last three years and embarked on two major expansions – to Eastern Canada in 2014 and the United States in the fall of 2016. It already has 11 stores south of the border and most recently, the retailer opened its first store in New York City at 120 Prince Street in Soho, and it’s already been a hit among locals. The company also has 10 stores in California.

If you can make it in New York City, you can make it anywhere, they say. If true, Saje Natural Wellness will ‘make it’ with the opening of its second store in Manhattan in August, when it unveils a new location at 158 Columbus Avenue in the city’s famed Upper West Side.

According to Kate Ross LeBlanc, Saje Natural Wellness will continue to expand in the United States, with a continued focus on both the west and east coasts. After that, the company will look inward to markets such as Chicago for stores. At some point, the company could expand beyond North America, potentially targeting markets such as Australia and the United Kingdom.

In Canada, store number 52 will be opening at Vancouver’s CF Pacific Centre this year — the downtown mall ranked as one of Canada’s top malls by Retail Council of Canada’s Shopping Centre Study. CF Champlain in Moncton will also open soon, and will be store 51 for Saje Natural Wellness. There will also be some store renovations and even a relocation — the company’s CF Sherway Gardens unit is expanding to a space almost twice the size within the mall, in a new Nordstrom-anchored expansion wing set to debut in August. Saje also has a store in another Nordstrom-anchored wing — at Toronto’s Yorkdale Shopping Centre — in a dramatic retail space with soaring high ceilings.

The company’s growth means that it’s time to move into a bigger office. In about 18 months, it will relocate its Chinatown office in Vancouver to a space about twice the size on East 5th Avenue, in the city’s Mount Pleasant area.

Saje Natural Wellness stores are often unique, both inside and out, with differentiated facades as well as nature-inspired interiors. It’s “an elegant mixture of old-world apothecary and new-world modern”, according to the store design team, and Saje describes its style as ‘West Coast – Modern Apothecary’. The company recognizes that most of the time, the consumer’s first experience with Saje is through one of its stores. As a result, its design team endeavours to create environments that allow people to understand what the Saje brand is about almost instantly, through the visual elements of the spaces and sensory experiences of its products.

“Our focus has always been on a continual and steady evolution of store design that celebrates our commitment to 100% natural by using plants, fixtures, finishes, furniture, materials, and textures that have that same integrity and are inspired by nature,” notes the company when describing its in-store environments. Stores are a positive space, with bright lighting, friendly staff and music. Retail Insider partner Peregrine has built fixtures for a number of Saje Natural Wellness stores, and we recently toured a location with Peregrine’s President, Brian French, who pointed out how the natural looking fixturing is also functional for smaller retail spaces such as Saje Natural Wellness.

To commemorate Canada’s 150th Birthday as well as to mark Saje Natural Wellness’ quarter century milestone, the company recently launched a 25th anniversary pocket pharmacy, which it says is selling rapidly at its various locations.