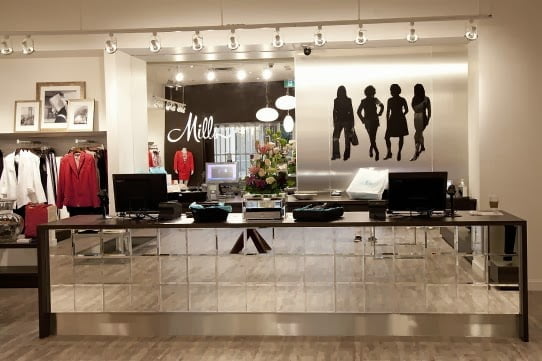 Halifax’s upscale downtown department store, Mills, is having a grand “re-opening” starting Saturday. The store was recently purchased by four women who have relocated the store and have modernized its branding and product selection. We spoke to owner Lisa Gallivan about her new store.


Mills did something bold in the world of North American retailing – it stayed downtown, while so many retailers have chosen to open in suburbs. Mills opened in 1919 and has remained downtown ever since. Mills first occupied an entire tutor-styled building of about 37,000 square feet. Previous owners downsized the store to only about 8,000 square feet, while the rest of the space was leased to smaller retailers. Mills left that space after being purchased by the four women, who moved it up the street.


The new Mills is only about 9,000 square feet over two floors, but it’s more open and better laid-out than the previous store. The new location is within a shopping complex called Spring Garden Place.


There isn’t much for men, though some Michael Kors clothing is available, and a men’s skincare line called Jack Black is also featured.

The store is concentrating on catering to women of a wide variety of ages. This is a smart move, as the previous Mills client was traditionally more mature. As Halifax’s population ages, bringing in new, younger shoppers will be beneficial to the store’s success.


The store’s “grand re-opening” event starts Saturday and continues until October 5th. For a complete list of events, we direct you to this link.


We’re pleased to be reporting on retail in Atlantic Canada, and we’d like to do more. If you’ve got any retail tips for things happening in Canada’s Maritimes, please feel free to email us at: insider@retail-insider.com


Thank you for reading Retail Insider, and have an excellent weekend.

Craig Patterson - August 4, 2022
A total of four stores will open in Canada this year with plans for more into 2023.