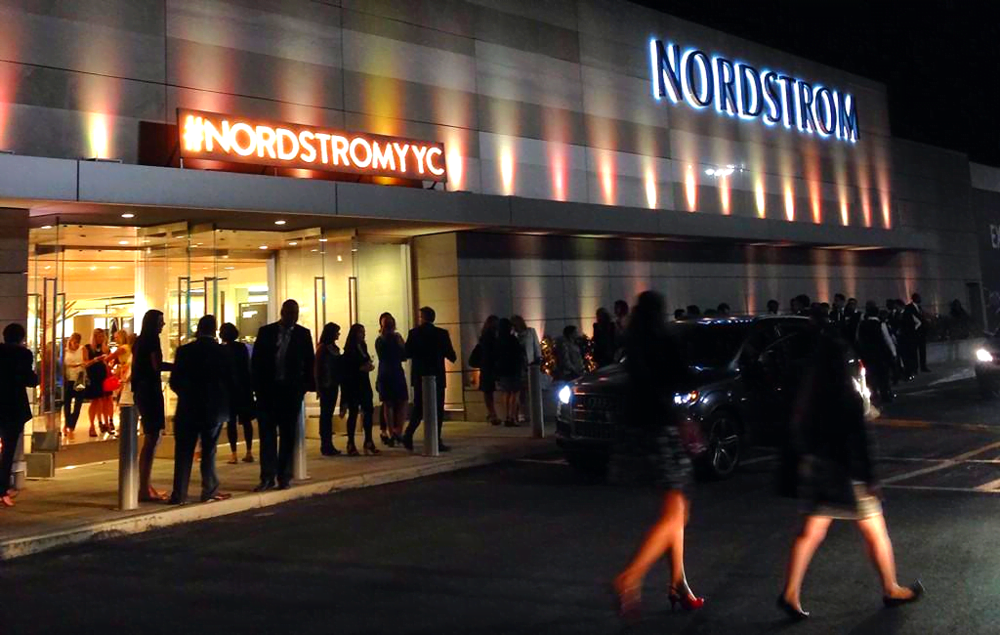 Last night we attended the gala opening of Canada’s first Nordstrom location, and we’ve included some photos in this article. The store is stunning. The Calgary store is only the second in the chain to feature the retailers’s new store design, which other Canadian Nordstrom locations will follow. The Chinook Centre store opens to the public at 9:30 am tomorrow (Friday, September 19). The following is a description of our first impression of Chinook Centre’s Nordstrom, as well as various photos from the gala.

Overall, the interiors of Calgary’s Nordstrom are brighter and more contemporary than most of its American locations. Smooth white ceilings characterize much of the store, as opposed to the tiled ceilings and tract lighting common in most American Nordstrom locations. Calgary is the retailer’s second location to adopt such contemporary interiors, following the recent opening of a Nordstrom location in suburban Houston, Texas.

The store’s flooring is primarily tile, as opposed to carpeting which covers much of Nordstrom’s American store locations. Tiled floors allow flexibility to shrink or expand each department with carpeting according to demand. Carpet over the tile can be moved and is held with adhesive.

Footwear features prominently on the store’s ground floor. Prices vary from the affordable to well in excess of $1,000 per pair.

The women’s handbags department features a wide variety of designers. Along the wall are shops for Burberry, Valentino, and Chloé. Each shop has its own register.

The store’s top-priced womenswear department, Collectors, features designers such as Missoni, Akris Punto, Michael Kors, and St John Knits. As is the case with most departments, it is open and characterized only by carpeting.

Menswear ranges from the trendy to the professionally conservative. Prices vary. We spied a beautiful Salvatore Ferragamo jacket but decided against the $2,150 purchase price.

The store features artwork from various Canadian artists, especially around dressing rooms and other common areas.

The store’s cosmetics department features an open-sell concept. Experts are on hand and, interestingly, are available to assist shoppers for the entire department, not just from one brand.

The store is far more open than Nordstrom’s US locations. It’s possible to see clear across the store from various departments.

Nordstrom was founded in 1901 as a shoe store and naturally, its footwear selection is exceptional. We couldn’t resist buying this pair of patent leather dress shoes. They’re from Nordstrom label, Calibrate, and were reasonably priced at at $120.

The gala saw over 1,800 people attend, and raising over $180,000 for  the Alberta Children’s Hospital Foundation, as well as the Calgary United Way. Tickets went on sale last summer for $100 each and sold out in exceptional time. The entire cost of the gala was underwritten by Nordstrom, meaning that all proceeds from ticket sales went to these charities.

Nordstrom Expects Vancouver Store to be Top Performer… Until Manhattan