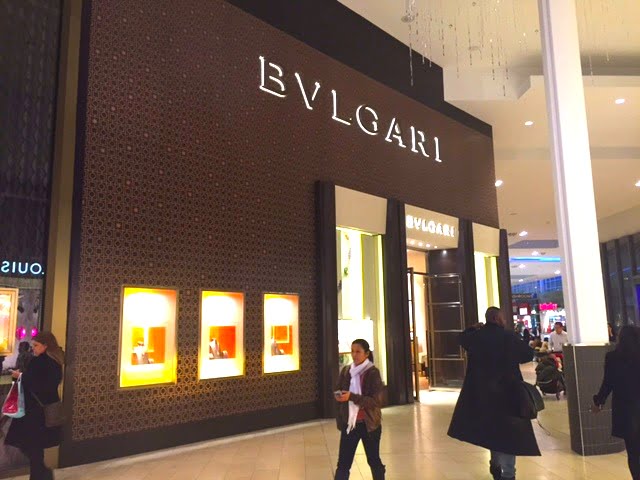 Luxury Italian jeweller Bulgari has opened its first Canadian location at Toronto’s Yorkdale Shopping Centre. It could be the first of several Canadian locations for Bulgari, we’re told, though the retailer is being cautious with any potential expansion plans.

Bulgari’s Toronto store carries the brand’s pricey jewellery collections for women and men, as well as handbags and accessories, timepieces, and fragrances. The store’s exterior facade features oversized windows and soaring marble columns, with the BVLGARI logo backlighted on the cream coloured stone. One of the brand’s key design elements, the Condotti eight point star, lies on the store entrance. The store features bridal, male, accessories, and VIP areas, where pieces can be viewed in privacy.

“Bulgari represents the ultimate in craftsmanship, creativity and innovation,” said Jean-Christophe Babin, CEO of Bulgari. “We are thrilled to open this store and to bring that extraordinary combination to Canada in a manner that perfectly represents the modern Bulgari brand while still paying tribute to our rich Roman heritage.”

The 1,815 square foot Yorkdale boutique is located across from Holt Renfrew in the mall’s ‘luxury wing’, alongside brands such as Mulberry, Salvatore Ferragamo, Cartier, Versace, Tiffany & Co, Jimmy Choo, and others. Yorkdale, itself, has created a world-class cluster of luxury retailers in a concentration unrivalled anywhere in Canada. The neighbouring Holt Renfrew houses luxury concessions such as Louis Vuitton, Chanel, Gucci, Prada, Dior and Giorgio Armani, as well as a vast assortment of upscale brands across various product categories.

Founded in 1884 in Rome, Bulgari is now part of French luxury goods conglomerate LVMH. Bulgari operates over 300 stores worldwide, including 15 free-standing American locations. Bulgari shops-in-stores are also located in various upscale jewellers, as well as luxury department stores such as Saks Fifth Avenue and Neiman Marcus. No word yet if Bulgari shops will be featured in any Canadian Saks Fifth Avenue locations.

Besides its new Yorkdale store, Bulgari products are carried at Maison Birks in Calgary, Montecristo Jewellers in Vancouver, Chateau D’Ivoire in Montreal, and at Bandiera Jewellers in Toronto.

Bulgari representatives won’t formally comment on the retailer’s Canadian expansion plans, except to say that future locations are a possibility. A business analyst, speaking on the condition of anonymity, says that the brand’s Canadian expansion plans will be cautious and be partly based on the success of its Yorkdale store. Retail analysts speculate that Bulgari could eventually operate three or more Canadian locations. Vancouver is an obvious choice for Bulgari, given its rapidly growing luxury market fuelled by affluent Chinese shoppers. A second Toronto location is also speculated, likely in the city’s posh Yorkville shopping area either on or close to Bloor Street West. One source speculates that a Calgary location could also follow.

In the early to-mid 2000’s, a 700 square foot Bulgari shop-in-store operated with a 101 Bloor Street West entrance at Royal de Versailles jewellers in Toronto. The store closed due to lack of sales, and the space is now occupied by watch brand Rolex.