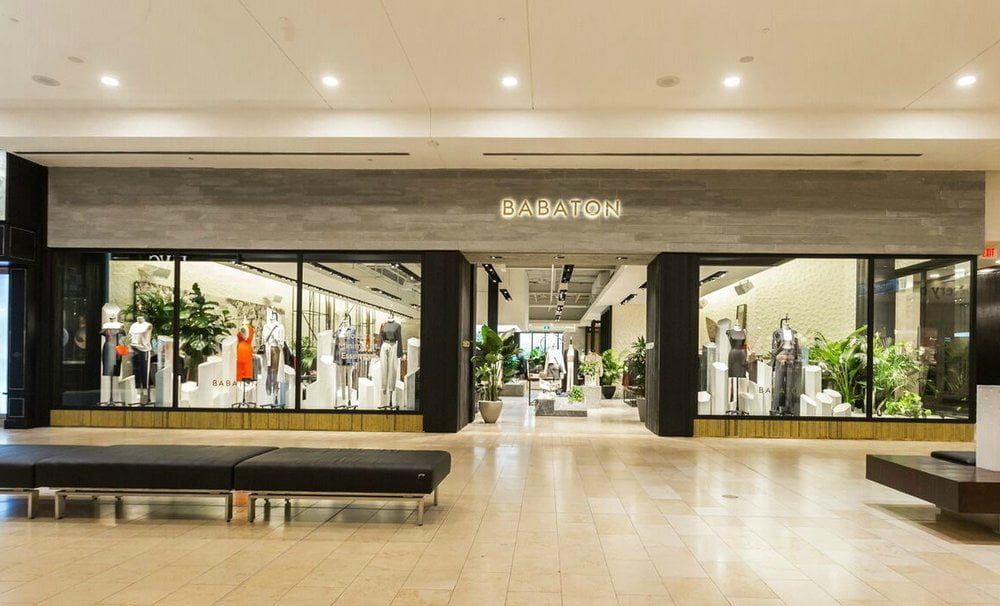 Babaton’s first location opened last December in a 1,777 square foot space on the third floor of CF Toronto Eaton Centre, which formerly housed a Wilfred location (Wilfred relocated in the mall to a considerably larger retail space downstairs). Babaton and Wilfred began as Aritzia exclusive brands, and both have since been spun off to include their own freestanding stores.

Two more Babaton locations are currently under construction. A 4,870 square foot location will open in several months at Square One in Mississauga, marking the third Babaton in the Greater Toronto Area. Babaton will be located near Square One’s Holt Renfrew, across the hall from a recently opened Rolex boutique.

Aritzia notes that Babaton’s stores “help propel the brand” and that the company views its new Babaton stores as being its “most important marketing tool”. Babaton, as well as other Aritzia brands including Wilfred and TNA, are “generally opened in malls or shopping streets where our established Aritzia store is performing very well, but due to real estate space limitations (such as no other high-profile spaces available, or lack of adjacent store vacancies), we are not able to expand the existing store,” according to Aritzia. The company explained that where it is unable to expand an existing store (often in a very prime location), it finds additional space within the same mall/street to open a banner store. This store strategy allows Aritzia to increase its square footage in the mall/on the street, while still maintaining the optimal location of its established store, given expansion limitations.

To that end, it is likely that Aritzia will open more Babaton stores in Canada (not to mention Wilfred), though the company has not confirmed any more locations as of yet.

*Photos are of the Yorkdale store, and were provided courtesy of Aritzia/BICOM Communications.