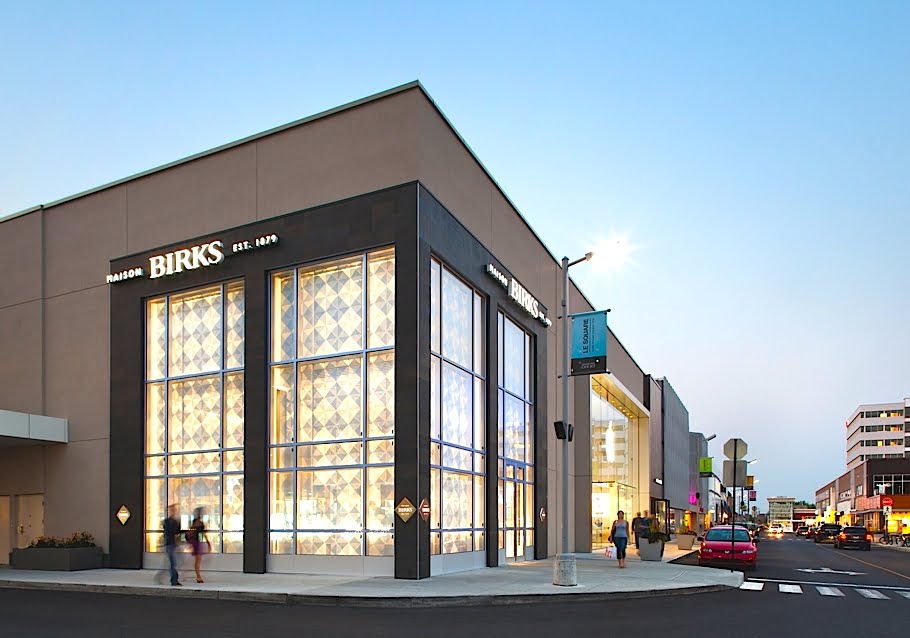 Upscale Montreal-based jeweller Maison Birks will spend over $4.5 million this year expanding and renovating its Canadian base of stores, following its recent rebranding. The retailer opened and renovated several new Canadian locations in 2014, with plans to open more locations into 2015 and beyond. Remarkably, the retailer is almost consistently building smaller stores when it replaces previous locations and as a result, some of its largest locations are being replaced by some of its smallest.

Birks has recently opened a number of store locations, including stores in Calgary, Burlington and suburban Montreal. Its Burlington store, located at Mapleview Centre, measures 1,384 square feet while its Brossard store, located in the popular Quartier DIX30, measures 1,690 square feet. Its newest Calgary location, located next to Canada’s first Nordstrom in Chinook Centre, measures 3,660 square feet and replaces a 2,340 square foot location in the same mall. This is the only recent instance where a replacement Birks has been larger than a former location. Downtown Calgary’s Birks recently renovated and added a Rolex shop-in-shop with its own dedicated mall entrance. The downtown Calgary Birks location, however, has been reduced in size from 7,895 square feet to 5,568 square feet, with 2,330 square feet going to Michael Kors. At one time, downtown Calgary’s Birks spanned an impressive two floors.

In the spring of 2014, Birks also opened a wedding-focused concession adjacent to the new Kleinfeld Bridal on the seventh floor of Hudson’s Bay at Toronto Eaton Centre.

Maison Birks will continue its Canadian store expansion into 2015. A new location will open in Edmonton, joining recently opened Ottawa and Mississauga stores. Located in West Edmonton Mall, the Edmonton location will measure about 1,400 square feet and will open in the spring of 2015. Birks’ new Ottawa Rideau Centre location, measuring 2,704 square feet, replaced the mall’s 7,250 square foot Birks flagship. A 1,780 square foot Square One unit in Mississauga recently replaced a 3,360 square foot location in that mall.

It should be noted that some of Birks’ smaller new stores are mono-brand locations primarily carrying Birks-branded jewellery and accessories, as opposed to larger locations (like Calgary’s new Chinook Centre unit) carrying various designers.

The company also operates a 4,200 square foot unit at downtown Edmonton’s Manulife Place. With a lease expiring in May of 2016, sources say that its future is uncertain.

Maison Birks, formerly known as Henry Birks & Sons or simply ‘Birks’, underwent a rebranding in 2013, featuring revamped store interiors and a focus on house-brand Canadian diamonds. The retailer continues to carry a variety of other luxury jewellery and watch brands in its stores as well, including brands such as Cartier, Van Cleef & Arpels, Bulgari, Montblanc, Tag Heuer, and others.

Birks currently operates 32 stores in Canada, including 30 Maison Birks stores and two Brinkhaus-branded retail locations in Calgary and Vancouver. Both operate under parent company Birks Group, which also operates 18 jewellery stores under the Mayors nameplate in Florida and Georgia, as well as one free-standing Rolex store in Orlando. The company’s largest store is in Vancouver, spanning an impressive 20,220 square feet in a former bank building. It’s Montreal flagship is second, measuring 19,785 square feet of retail space. The company’s Montreal headquarters is located above, measuring over 58,000 square feet.

Birks was founded in Montreal in 1879. From 1950 through 1990, Birks aggressively expanded its retail business and by the early 1990s it had approximately 220 stores in Canada and the U.S. After a period of rapid expansion in the 1980s, the company experienced substantial financial losses in the early 1990’s, eventually leading to a 1993 buyout by Italian firm Borgosesia Acquisitions Corporation. In the summer of 2013 the company announced that Birks would change its name to Maison Birks, along with updated storefronts and a focus on Birks-branded diamonds and jewellery.

Load more
Previous articleCanadians Holiday Shopping Online, 2014: Which Retailers Made The Grade?
Next articleBefore and After: Yorkdale Creates a Luxury Wing From the Mundane