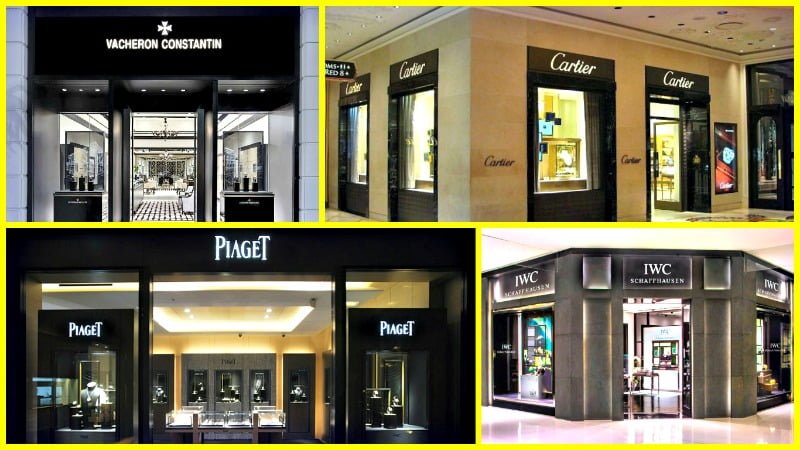 Geneva Switzerland-based luxury goods holdings company Richemont has big plans for Canada in 2017, including opening boutiques as well as renovating/expanding some existing locations. At least nine freestanding Richemont-owned luxury boutiques are confirmed to be opening next year, with the possibility of even more as negotiations continue, according to sources.

Construction hoarding went up at Toronto’s Yorkdale Shopping Centre this week, revealing what industry insiders have been aware of for months — that four of Richemont’s top luxury brands would occupy the mall’s former Williams Sonoma space (Williams Sonoma relocated to its new space in the mall’s recently opened ‘Nordstrom Wing’). The four boutiques will include Piaget, IWC Schaffhausen, Vacheron Constantin and Officine Panerai, and will expand the mall’s ‘luxury wing‘ northward.

The following is a brief description of each brand, including where it operates in the United States:

Piaget: The luxury jewellery and watch brand, founded in Geneva in 1874, is considered to be one of the world’s most prestigious brands, according to the Luxury Institute. Piaget operates seven locations in the United states — in New York City (Madison Avenue), Beverly Hills (Rodeo Drive), Costa Mesa CA (South Coast Plaza), Miami (Miami Design District), Las Vegas (Wynnn Encore), DFS ’T Galleria’ in Honolulu, and at Saks Fifth Avenue in Houston. There’s also a Piaget concession at Saks Fifth Avenue’s Canadian flagship at CF Toronto Eaton Centre, and with the opening of the Yorkdale boutique, Toronto will become the only city in North America to boast two Piaget stores. Toronto’s Saks Piaget concession opened in February of this year.

Vancouver is also part of Richemont’s expansion plans, with sources at the City confirming that the company has purchased stratified retail space for at least one of its more prominent brands. We’ll discuss more on Richemont’s Vancouver expansion at a later date when permitted, though we’re able to confirm, through the original source of Business in Vancouver, that Richemont’s Van Cleef & Arpels nameplate will open a large store on Alberni Street in the heart of the city’s downtown ‘Luxury Zone’.

Van Cleef & Arpels will also open a freestanding Toronto location in 2017, with details to be revealed at a later date when permitted. The brand will also gain prominence on Bloor Street West with the renovation of Maison Birks at Manulife Centre, which will see a Van Cleef & Arpels shop-in-store gain its own street-front entrance, near an exterior entrance to Italian food concept Eataly which will be located directly above. Manulife Centre’s renovations will be completed in 2019.

*Looking for exposure to thousands of Canadian and international retailers? There’s still room to advertise in a high profile Retail Council of Canada Canadian shopping centre study, which will be distributed widely and promoted heavily. For information on Sponsorship opportunities, contact: cpatterson@retailcouncil.org*

Richemont’s Cartier brand is also seeing movements in Canada. The brand is currently renovating its two-level Bloor Street West flagship in Toronto, and sources say that another important location could be expanded. A new Cartier store could open in a major Canadian city next year, while another existing location will be relocated, according to sources familiar with the deals.

Luxury watch brand Jaeger-LeCoultre, also under the Richemont ownership umbrella, expanded into Canada in the fall of 2015 with stores on Alberni Street in Vancouver, and at Yorkdale Shopping Centre in Toronto. The company’s Montblanc nameplate has also been growing in Canada over the past several years, now operating six corporately-owned and franchised locations in Montreal, Toronto and Vancouver. Richemont’s Chloé and Azzedine Alaïa women’s fashion brands have also seen recent growth in Canada. Separate Chloé women’s ready-to-wear and accessory shops opened at Nordstrom in Vancouver in September of 2015, followed by the same at Saks Fifth Avenue in downtown Toronto in February of 2016, and at Nordstrom at Toronto’s Yorkdale last month. Pricey Azzedine Alaïa, with limited distribution globally, saw the opening of a women’s ready-to-wear boutique on the third floor of Saks Fifth Avenue’s Toronto flagship in February of 2016 — remarkable, considering Hudson’s Bay’s ‘The Room’, located on the same floor in the same building as Saks Fifth Avenue, also boasts a well-stocked Alaïa section.

A number of other luxury houses and luxury brands have recently been expanding in Canada, including Prada, Chanel and Kering Group (the latter opened two Saint Laurent boutiques in Canada in 2016, including a Yorkdale location last week). Canada is increasingly seeing luxury brands opening stores as well as expanding distribution, addressing rising incomes among the country’s elite, not to mention increasing tourism numbers in Vancouver and Toronto. We’ll do a follow-up article in the coming weeks discussing the expansion of luxury brands into Canada, as it’s a remarkable trend at a time when some global markets are contracting, and some brands are seeing lowering sales.