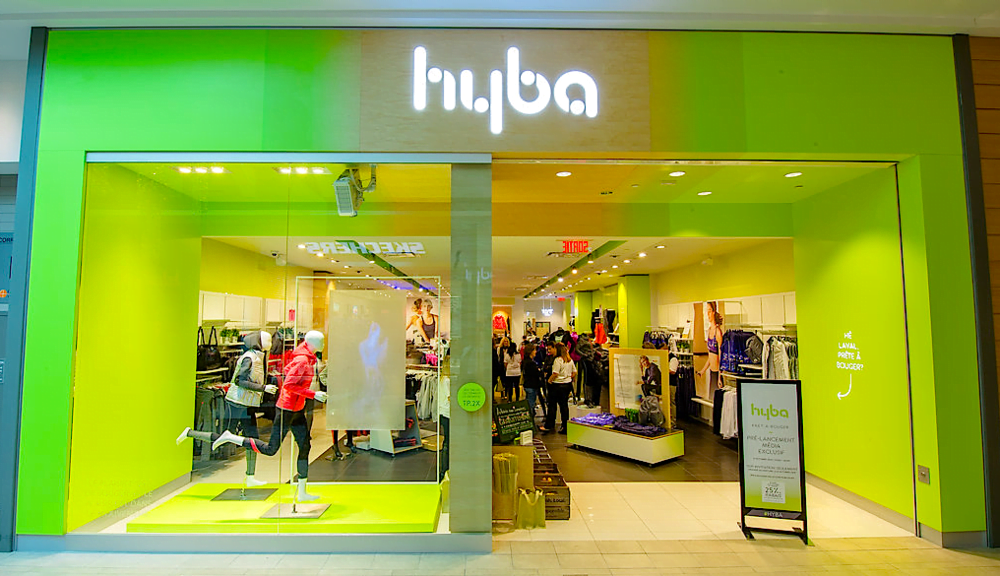 Montreal-based women’s fashion retailer Reitmans launched freestanding locations for its Hyba activewear line last month, conveniently placing them in former Smart Set locations. We interviewed a company representative to learn more about plans for the brand’s expansion, as well as how Hyba addresses a ‘white space’ in Canada’s activewear market.

Jeannie Vondjidis-Miller, VP of marketing and visual presentation for Reitmans and Hyba, explained the concept as a well-priced, high-quality line of women’s activewear that saw initial success within Reitmans’ stores. The line, which launched in Reitmans stores about two years ago, responds to a need in the marketplace for style-focused yet affordable activewear that fits women in a wide range of sizes. Hyba speaks to women who are seeking to become more active without the pressure of becoming a ‘top athlete’, and is meant to encourage movement, fun and health. It offers a range of activewear apparel and accessories, including dry wicking performance gear, yoga attire, and style-focused athleisure looks. Sizes range from 2 to 20 — broader than competitors, and prices are mid-range with tops priced between $28 and $34, and bottoms priced $38 to $44.

Last year Reitmans announced that it was shuttering its Smart Set banner of stores. A total of 17 former Smart Set locations were selected to be converted to the Hyba banner, and these locations have been opening over the past several weeks. Stores are located coast-to-coast, from Nova Scotia to British Columbia. Hyba Flagships are at CF Carrefour Laval and CF Galieries d’Anjou in suburban Montreal, and at CF Markville in Markham, Ontario.

Ms. Vondjidis-Miller explained that Hyba plans to open more Canadian locations, and that it will do so carefully as the right real estate becomes available. Enclosed shopping centres are currently the brand’s target, though that could change as Hyba expands.

Activewear is the fastest-growing category in apparel today, according to Farla Efros, President of leading retail consultancy HRC Advisory. She explained how the yoga pant has ‘taken the market by storm’, and how they have replaced jeans in many respects as the ‘new black pant’. She noted how higher-end yoga pants average about $100 a pair, and that Reitmans could see tremendous success from the value-priced concept. Ms. Efros went on to say that Hyba could invigorate Reitman’s operations as a whole, leading the company to stronger sales and increased profitability.